U.S. Election Update - Less than a Month Away

Less Than a Month Until Election Day

As we enter the final month of the presidential campaigns, there is a sense across the political spectrum that the race has taken a decisive turn in the past week.

While Trump has consistently trailed Biden in polls for the entire year, the events of the past week appear to have moved a relatively close race towards a blue wave in November.

The combination of The New York Times story on Trump's failure to pay federal taxes for ten of the past 15 years and his poor performance in last Tuesday's debate has taken a toll on Trump's support as we hit the final 30 days of the presidential campaigns.

Current polling has not yet measured the impact of Trump's disclosure that he has contracted the coronavirus. While other leaders who have been infected―including British Prime Minister Boris Johnson―have experienced a slight sympathy bounce in the polls, Republicans are openly saying that the bottom has fallen out for GOP candidates across the country in the past week.

This sense is reflected in the Wall Street Journal/NBC poll that was released on Sunday, October 4. In the poll, which was completed prior to Trump's announcement that he had the coronavirus, Biden has opened up a 14-point lead (53% to 39%) over Trump, a 6-point increase from their polling last month.

Trump’s COVID-19 diagnosis and unclear condition pose more questions than answers for the race. There are a myriad of governmental and constitutional implications that go beyond the election itself that this note does not address. Issues still to be determined for the race include how quickly Trump will recover, whether he will change how he discusses his management of the virus when he returns to the campaign trail, if debates will continue as scheduled, and countless others. Given all the unknowns, it is too soon to understand the full impact of the president’s diagnosis on the race. The only thing we know for sure is the coronavirus will reassert itself as the dominant issue in the campaign.

As we enter the fall, cooler temperatures have led to an increase of cases in several key battleground states in the Midwest. Wisconsin has been particularly hit hard, as it has suffered the third most new cases in the country in the past seven days. The rate of infections has also increased well above the national average in the past seven days in Ohio, Pennsylvania, Michigan, and Iowa.

And there has been a significant increase in southern states including Florida, North Carolina, Georgia, and Texas.

The outbreak of the coronavirus throughout the Trump White House and campaign team has further complicated Republican efforts to confirm Amy Coney Barrett prior to the election.

The September 26th Rose Garden announcement of Barrett's selection appears to have been a super-spreader event with at least four Republican Senators having contracted the coronavirus there, including two members of the Senate Judiciary Committee, Sen. Mike Lee (RUT) and Sen. Thom Tillis (R-NC).

While Senate Majority Leader Mitch McConnell has postponed Senate floor activity for the next two weeks, he has indicated that the confirmation hearings will proceed as planned, beginning October 12th.

There is a precedent for the Judiciary Committee to hold hybrid hearings but a vote by the full U.S. Senate does not allow remote or proxy voting. 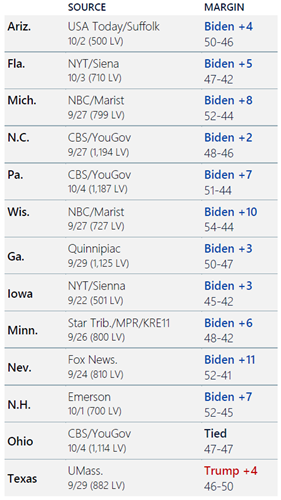 Biden is leading Trump by 8 points in Wisconsin, 7 points in Pennsylvania, 6 points in Michigan and 4 points in Arizona.

Biden is also leading by 5 points in Florida and is ahead or within the polling margin of error in Ohio, Georgia, North Carolina, Iowa, and Texas.

Biden has multiple paths to reaching the 270 electoral votes.

If he holds all the states that Clinton carried in 2016, Biden starts out with a base of 227 electoral votes going into the final 30 days of the campaign.

There is a total of 181 electoral votes in states that are still considered competitive from which Biden can draw the remaining 43 electoral votes that he needs to reach 270.

Biden has maintained a consistent lead with his vote total polling near or above 50% in a majority of the remaining toss-up states.

While it is still possible for Trump to reach 270, his options are quite limited.

Trump will need to secure several states that have generally supported Republicans in previous presidential elections where he is currently trailing or tied with Biden to even have a chance of getting re-elected.

Unlike Biden, who has multiple likely paths to 270, Trump has a narrower path and very limited options in the remaining days of the campaign to even have a shot at re-election.

To view the above scenarios as electoral maps, click here.

The Center for Responsive Politics predicts that the 2020 presidential election will cost $11 billion. Thus far, $7.2 billion has been spent.

The Biden campaign continues to set fundraising records. Going into August, Biden and the DNC had a $131 million advantage over Trump.

While totals for September have not been released, the Biden campaign has said that it raised more money in September than it did in August, when it raised a record-setting $364.5 million.

Biden and the Democrats’ significant financial advantage has enabled them to dominate the television air waves in battleground states.

Over 3,300,000 votes have already been cast in the upcoming presidential election with the Democrats dominating the applications for absentee ballots. However, Republicans traditionally tend to vote on Election Day and this should continue to be the case this year. 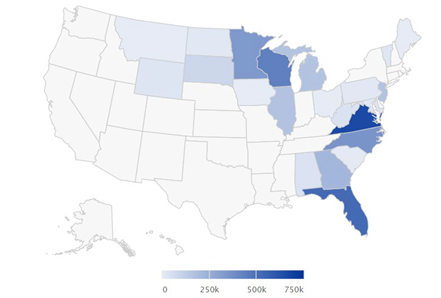 The impact of Trump's diminished standing in the polls is beginning to dampen the chances that the Republicans will be able to maintain control of the U.S. Senate.

Down-ballot races are increasingly determined by the outcome of presidential politics.

There are only 11 U.S. Senators of a different party from the presidential candidate who carried their states in the 2016 election. This year, three of these senators are on the ballot and all are currently behind in their races.

If Biden wins in November, the Democrats need to pick up a net of three seats to take control of the Senate.

With the Democratic candidate expected to lose in Alabama, the Democrats will need to defeat at least four Republicans.

They are currently ahead in Colorado, Arizona, and Maine, and slightly ahead or within the margin of error in Iowa, Georgia, Montana, and South Carolina. If there is a blue wave in November, the seats in Alaska and Kansas could also go to the Democrats.

The Senate race in North Carolina was rocked this week by revelations that the Democratic challenger, Cal Cunningham, who has been leading in the polls over Sen. Thom Tillis, was caught in a sexting scandal with a married woman.  In addition, the Republican incumbent has contracted the coronavirus and has been forced to self-quarantine for 10 days.

The upcoming Vice Presidential debate on October 7th at the University of Utah in Salt Lake City, Utah is currently scheduled to occur as planned. The candidates will now be seated 12 feet apart following a health and safety inquiry from the Biden campaign.

No decision has been made about the second presidential debate which is currently planned for October 15th in Miami, Florida.

The Washington Post
Biden stiff-arms the left — which holds its fire
By Sean Sullivan, David Weigel and Annie Linskey

The News & Observer
The NC Senate race was stable. Then came Tillis’ positive test and Cunningham’s sexts.
By Brian Murphy and Jim Morrill

Brunswick is a strategic advisory firm focused on critical issues.
Our U.S. Public Affairs offer specializes in influencing the complex and dynamic factors that affect public opinion, political and regulatory outcomes, and corporate reputation at all levels of government.