Biden Continues to Lead in the Polls

Due to structural social divisions that increasingly drive American politics and despite the series of events that have rocked the U.S. and the world this year, the U.S. election has remained remarkably stable with Biden maintaining his lead.

In the poll, 60% of voters believe that the country is headed in the wrong direction. Trump has a 45% job approval with only 40% of voters approving of his handling of the coronavirus. Since 1980, no president has been re-elected with a job approval lower than 49%. 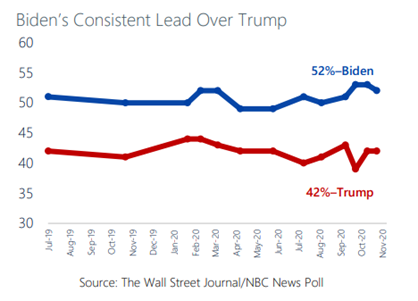 The final state polls from The New York Times and The Washington Post that came out over the weekend show Biden with a lead over Trump in most of the battleground states as well. In most of these states Biden is polling above 50% with Trump lagging behind his 2016 totals.

For Trump to win, he is going to need to have a massive Republican turnout on Election Day and increase the 2016 turnout of non-college whites in battleground states to offset the defections that the Republican party has suffered since he took office. According to betting oddsmakers, Trump needs to raise his 2016 count of 63 million votes by 11 million or 17% to have a chance of getting re-elected.

Trump has focused on a handful of states during his presidency and campaign, there is some evidence that his below-the-radar efforts have been working. The bulk of the voters that the Trump campaign has been targeting are white working-class people who disproportionately tend to live in small towns and rural areas that dot the Rust Belt states of Wisconsin, Pennsylvania, and Michigan. His campaign has paid particular attention to three types of these voters: 1) registered voters who didn’t vote in 2016, 2) “Trump disengagers”—2016 Trump voters who didn’t turn out in 2018, and 3) previously non-registered voters who are now planning to vote in 2020. The Republicans have also been able to outpace Democrats in registering new voters in several key battleground states including Pennsylvania, Florida, and North Carolina.

Unlike the Democrats, the Trump campaign has been conducting door-to-door canvasing since the beginning of the summer and there is evidence that this has given him an edge in some battleground states. He is also closing the campaign with a much more vigorous schedule than Biden, holding 14 events in the final four days where he continues to draw large and enthusiastic crowds.

There has been record early voting and this is the first election in U.S. history in which the majority of the ballots will be cast before Election Day. Over 93 million votes have already been cast which is more than 67% of the total in 2016. The U.S. is also on track to surpass 150 million votes for the first time in its history. It is likely that as many as a dozen states will have more votes cast prior to Election Day than the total number of ballots cast in 2016 including the battleground states Arizona, Florida, North Carolina, Georgia, and Nevada. Battleground Texas has already surpassed its 2016 total vote.

In an analysis by the AP, in states with party registration, the Democrats currently hold a 14- point advantage over the Republicans. In addition, 27% of the early vote has come from new or infrequent voters. However, the Democrats’ lead has narrowed in several battleground states in the past week, including in Florida’s biggest county, Miami-Dade, where Democrats are turning out at lower rates than Republicans at this point in 2016. Nearly 63% of the 428,000 Republicans in Miami-Dade have voted, but only 56% of the county’s 634,000 Democrats have cast their ballots thus far. In addition, polling has always indicated that a majority of Republicans are planning to vote on Election Day. The weather forecast calls for dry and mild weather across the country on Election Day, which should further boost turnout.

Trump is operating at a significant financial disadvantage as he tries to close the gap in support over the final 48 hours.

Reports indicate that Biden and his allies bought $127 million in television ads to cover the last seven days of the campaign, compared to only $68 million dollars for Trump and his affiliated groups.

Coronavirus Cases Surge Across the Country

The U.S. had its worst week ever with over 550,000 new coronavirus cases, which is a 25% increase from the previous week and an 83% increase in the last 30 days. There are now nine million confirmed cases compared to eight million only two weeks ago. On Friday alone, there were 99,784 new cases, which is a single-day high with 16 states reporting single-day records. During a Friday call with governors, Dr. Deborah Birx, the White House coronavirus response coordinator, indicated that two dozen states are reporting their worst week for new cases since the pandemic began in March with at least 1,200 counties, one-third of the country, now considered virus hot spots.

As European countries return to mandatory lockdowns, there is a consensus in the medical community that the spread of this disease will increase as winter approaches. The University of Washington School of Medicine research model now predicts that the virus will last longer than expected with a projected 399,000 deaths by February 1st. Key presidential swing states have been hit particularly hard by new cases of the virus.

Trump’s presidency has accelerated the completion of a political realignment that began forming in the early 1990s.

In 2018, the Republican Party suffered the most losses in a midterm election since 1974. Trump has never faced the voters since the completion of this political shift.

In this post-realignment world women, suburban, independent, and educated voters have abandoned the Republican Party. These voters fuelled Democrats’ success in 2018 and they are expected to support Biden in large numbers in 2020.

While Biden is currently outperforming Clinton’s 2016 totals across almost all demographic groups, these are five groups of voters to pay particular attention to on election night:

While Democrats have turned out in higher numbers so far, the Republicans have closed the gap in the past week in several key battleground states. In Florida, the Democrats’ early lead of 470,000 ballots cast has now been reduced to less than 94,000 votes. 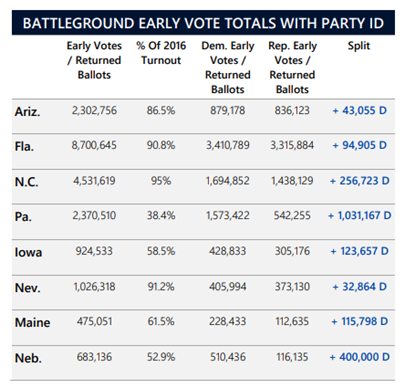 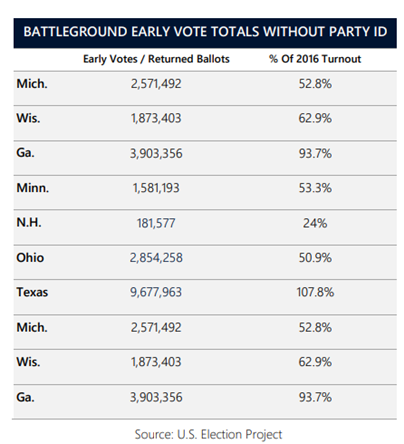 Record-setting early voting has put a severe strain on states’ election systems across the country. State control of elections has led to a patchwork quilt of rules and regulations that dictate when and how a voter can cast a ballot, as well as the timing for processing and counting ballots.

As with pretty much everything else in America, the process of how and when people vote has become politicized. Trump has made the risk of voter fraud in voting by mail a central theme of his campaign. He argues that any results counted after November 3rd could be riddled with fraudulent votes. Axios’s Jonathan Swan reports today that Trump plans to declare premature victory if he is ahead on election night. Democrats’ position, which has been backed up by Republican election lawyers, is that there has been no evidence of any fraud in voting by mail in this or any other election.

The three midwestern states that enabled Trump to win the 2016 election—Michigan, Wisconsin and Pennsylvania—all have policies that make it very unlikely that they will be able to declare a winner in their state for several days and even possibly weeks if it's a close election.

The other battleground states will likely be able to announce a winner on election night and those outcomes will determine how important these potential Rust Belt disputes will be after all the polls have closed.

There are six battleground states—Florida, North Carolina, Georgia, Ohio, Texas, and Arizona— with election systems that process the early votes before Election Day. This will enable them to declare a winner on election night unless the race is too close to call.

These six states are must-win states for Trump. If he loses any of these states, and this is particularly true for Florida, then it is unlikely that Trump will be able to get the 270 electoral votes necessary to win regardless of the outcome in Michigan, Wisconsin, and Pennsylvania.

In that case, Trump won’t be able to change the outcome of the election no matter how much he protests the results in other states.

This is why the timing of the vote counting is so important on election night. If Trump is able to hold on to the six battleground states that will likely have a result on Election Day, then the election system will convert to a legal battlefield in the days after the election. The Republicans claim to have signed up 50,000 volunteers to aid them in their legal efforts.

Control of the U.S. Senate

The party that wins the White House will also likely control the Senate. If Biden wins, the Democrats will need to pick up a net of three seats to take control of the Senate. With their expected loss in Alabama, they will then need to win four Republican held seats to take control. The outcome of the races will likely be determined by who wins the presidential election due to the straight party voting that now dominates politics in America.

In the most recent Cook Political Report ratings, the Democrats are favored to win in Arizona and Colorado with seven Republican held seats considered toss-ups.

If the Democrats have a landslide victory on Tuesday, then the Republican held seats in Alaska, Kansas, and Texas could also be in jeopardy. In addition to Alabama, the other Democratic seat in most jeopardy is in Michigan.

Doug has advised elected officials, corporations, foundations, universities, non-profits and philanthropists on strategic planning and crisis management. He served as a senior advisor to President Clinton for six years, playing a key role in policy, strategy, political and communications decisions in the White House.

As we enter the final 15 days of the campaign, there is clear evidence that the country’s economic recovery is slowing as the rate of coronavirus cases begins to increase again.