With 37 days left until Election Day, the race is tightening.

37 Days Until the Election

There were three subgroups in The New York Times poll that should be particularly troubling for Trump.

Nevertheless, recent polling in the key battleground states shows that the race has tightened in the past week.

Despite the horserace narrowing, Biden is currently leading or tied in 10 states that voted for Trump in 2016 with his vote total approaching or topping 50% in seven of these states.

Of the 13 battleground states, there are only two states, Arizona and Florida, where Trump is above 47% of the vote. Biden is currently ahead in all the states that voted for Clinton in 2016.

The New York Times poll also shows that at most, only 3% to 4% of voters are planning to support minor party candidates, which is a sharp drop from the 6% who did in 2016. Of the key battleground states, only Florida and Michigan currently have the Green Party on the ballot.

With voting already started, voters are increasingly dug in on who they support for president. In The Washington Post poll, only 5% of likely voters are undecided.

Public opinion on key issues is increasingly linked to presidential preference, although Trump continues to receive over 50% positive ratings on his handling of the economy in both polls released on September 27th.

On the issues, the latest Washington Post poll finds:

The Supreme Court Vacancy and Its Impact on the Race

The weekend announcement of Amy Coney Barrett filling Justice Ginsburg's vacant Supreme Court seat will likely boost turnout for both Trump and Biden, but it is an open question as to how it will impact the outcome of key battleground states.

However, it is likely to be a significant factor in the fight for control of the United States Senate.

Senator Lindsay Graham announced that the hearings will begin on October 12th and should last three to four days with a vote of the full committee set for October 22nd.

If the Republicans can stick to this schedule, it appears increasingly likely that a full vote of the Senate will occur before the election.

The first presidential debate will be held at 9 p.m. on September 29th at Case Western Reserve University in Cleveland, Ohio.

Fox News's Chris Wallace will be the moderator and the topics will be:

In the most recent Wall Street Journal/NBC poll, almost two-thirds of respondents indicated that the debates would not have a significant impact in determining who they would vote for in November. The audience for this debate is expected to exceed the record-breaking 84 million viewers who watched the first debate in the 2016 election.

The New York Times has obtained two decades of Trump’s tax information from “sources with legal access to it.” Breaking late on Sunday afternoon, the story provides details on Trump’s finances and how he has avoided taxes. Its influence on the overall race is yet to be seen, but it will be a topic during Tuesday night’s debate.

Six states will determine the outcome of a close election and all of them voted for Trump in 2016. 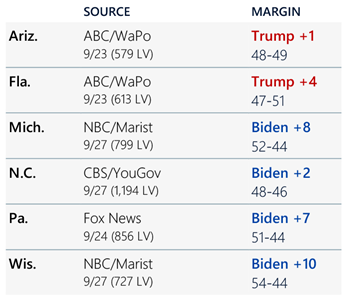 While Trump does not need to carry all these tier-one battleground states to get reelected, it is difficult to see a path to 270 electoral votes without carrying Florida and North Carolina.

If Trump carries these must-win states, he will still be 57 electoral college votes short, but will have multiple paths to 270 electoral votes.

If Biden were to win Michigan and Wisconsin, states that there were critical to Clinton's loss in 2016, then Pennsylvania becomes another must win state for Trump.

Seven additional states are still in play reflecting the relative closeness of the race. 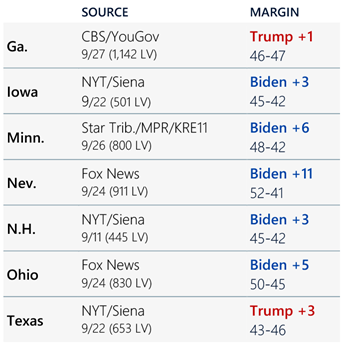 Of the four tier-two battleground states that Trump carried in 2016, polling has Biden ahead in Ohio and leading or within the margin of error in Iowa, Georgia, and Texas.

Trump’s share of the vote is no higher than the mid-forties in any of these states. Particularly concerning to Trump should be how he is performing in Ohio and Iowa, two states that are essential to his re-election campaign.

Trump is also trailing Biden in Minnesota, Nevada, and New Hampshire, three states that Clinton carried in 2016. His share of the vote is in the low forties in all three of these states.

As of September 27th, 944,000 people have already cast their vote. It has been widely assumed that Democrats were more likely than Republicans to vote before election day. The Washington Post poll and early reports on absentee ballot requests in key battleground states confirm these trends. According to the poll, of the voters planning to vote early, Biden is ahead 67% to 31% while election day voters favor Trump 58% to 39%.

Arizona
Voters in Arizona have long preferred to vote prior to the election. With their Permanent Voting List, approximately 80% of the state votes by mail.

Florida
Since 2016 the Republicans have been very aggressive in voter registration and have signed up almost 150,000 more voters than the Democrats.

However, the Democrats have built up a 693,000 advantage over the Republicans in absentee ballot requests. Backed by Mike Bloomberg, the Florida Rights Restoration Coalition is also helping pay fines to restore voting rights which has become hot-button issue for Trump and Republicans.

Early in-person voting starts on October 19th. Ballots that have not been received by November 3rd will not be counted. Florida processes all the early voting prior to election day and it is expected that we will have final results in the state by 11 p.m. on election night.
_________________________

Michigan
This past week Michigan extended the date for ballots to be counted. Ballots that are postmarked before November 3rd will be included in the final results if they are received by November 17th. In-person voting started in the state last week.
_________________________

North Carolina
As of last week, the Democrats have a 267,000 edge in vote by mail requests over the Republicans. There was also a ruling last week that extended the deadline for ballots postmarked by November 3rd to be included in the final count if they are received by November 12th delaying the final election count in the state. Early in person voting starts on October 15th.

Pennsylvania
Thus far the Democrats have a decisive 753,000 edge in absentee ballot requests in the state.

There were two significant judicial rulings in the state in the past week. The first was the disallowment of "naked" ballots cast that did not include the "secrecy envelope" which is a second envelope to place your ballot. Based on primary voting, it is projected that as many as 100,000 of these ballots which would likely favor Biden will not be counted this November.

Wisconsin
In another court ruling, ballots postmarked by November 3rd will now be counted if they arrive by November 9th. This has been temporarily halted by an appeals court.

Early in-person voting starts in the state on October 15th.

The upcoming Supreme Court nomination fight could have a significant impact in the fight for control of the Senate with the base of both parties more energized to turn out to vote in November.

If Biden is elected President, the Democrats will need to pick up a net of three seats to take control of the Senate. The Republicans are currently favored to win the Democratic seat in Alabama in which case they will need to pick up at least four Republican held seats to take over the Senate. In the most recent Cook Political Report ratings, of the 12 most vulnerable incumbents, the Republicans are defending 10 of these seats.

The Democrats are now ahead in five Republican held seats: Arizona, Colorado, Maine, North Carolina, and Iowa. While the impending Supreme Court fight will likely increase their chances of winning in blue-leaning Colorado, Maine, and Arizona, it will make it more difficult for them to knock off incumbents in red-leaning Montana, Iowa, Georgia, Kansas, South Carolina, and Alaska. North Carolina is currently a toss-up state and the outcome of this race could determine control of the Senate.

The Atlantic
The Election That Could Break America
By Barton Gellman

CNN
President Trump, Here are Three Tips for Besting Biden at the Debate
By Lanhee Chen

The New York Times
By Lowering the Debate Bar for Biden, Has Trump Set a Trap for Himself?
By Annie Karni and Maggie Haberman

Axios
When and How to Vote in All 50 States
By Stef W. Kight and Naema Ahmed

Doug has advised elected officials, corporations, foundations, universities, non-profits and philanthropists on strategic planning and crisis management. He served as a senior advisor to President Clinton for six years, playing a key role in policy, strategy, political and communications decisions in the White House.