The positions of Trump and Republicans have continued to deteriorate in the polls this past week, with the increasing probability that there could be a blue wave, a Democratic sweep into power, this November.

Senator Ted Cruz (R-TX) was quoted on Friday in a CNBC interview noting that the Republican party could be facing “a political bloodbath of Watergate proportions.”

Current polling now reflects the impact of Trump contracting the coronavirus, which has contributed to the overall decline for Republicans up and down the ballot.

In the Washington Post/ABC news poll released Sunday, Biden is now leading Trump 54% to 42% among likely voters. In the matchup against Trump, Biden continues to outperform Clinton with Independent, suburban, seniors, and college educated voters.

It should also be noted that a record number of Americans have already voted in the past 30 days.

With only 23 days left in the campaign, Trump and the Republicans are running out of time to turn this election around.

As much as Trump has tried to turn the page on the coronavirus pandemic, this election will be a referendum on his handling of the coronavirus. In the Washington Post/ABC news poll released on Sunday, Biden has a 17-point advantage over Trump in response to who would do a better job on managing the pandemic, with 58% of respondents disapproving of Trump’s handling of the virus.

All signs point to the virus getting increasingly worse as we enter the influenza season.

This past week, the world recorded its highest number of daily Covid-19 cases since the pandemic began, including a sharp increase in cases in the United States as well.

The United States is now averaging over 48,000 new Covid-19 positive tests a day, more than double what the country was seeing in June. In the past week, over half the states in the country have seen an increase in Covid-19 case counts.

Of the 15 states with the largest number of new cases reported in the past week, nine are battleground states (Texas, Wisconsin, Florida, North Carolina, Minnesota, Ohio, Georgia, Pennsylvania, and Michigan).

Not surprisingly, of the 10 states that have suffered the most deaths from the virus in the past 7 days, half are in battleground states (Florida, Texas, Georgia, North Carolina, and Pennsylvania).

The Institute for Health Metrics and Evaluation at the University of Washington projects that there will be over 363,000 deaths in our country by January, a 40% increase from the current death toll of 213,000 Americans.

The Senate Judiciary Committee is planning to hold a hybrid in-person and virtual hearing on Monday, October 12th to begin the Supreme Court nomination process.

The first day will be limited to opening statements by the Senators, as well as Judge Amy Coney Barrett. On Tuesday and Wednesday, Senators will question the nominee. On Thursday, following an outside panel, the committee will begin their internal debate. Chairman Lindsay Graham (R-SC) has indicated that he plans an October 22nd vote by the full committee. Senate Majority Leader Mitch McConnell (R-KY) has indicated that he will schedule a floor vote immediately following the Judiciary Committee recommendation

As the pace of coronavirus cases continues to rise, there are increasing signs that the pace of economic recovery has slowed, with stalled job growth, layoffs mounting, and doubts that the federal government will be providing help before the upcoming elections.

These are all bad signs for a President seeking re-election.

There are now over 25.5 million Americans who are receiving some form of unemployment benefits from the government. Of that number, 13.4 million people are collecting benefits under pandemic-related programs set up for those who would not normally be eligible for financial relief.

First-time claims of aid have remained above 800,000 cases each week since mid-March. Last week, there were 840,000 claims, much higher than expected.

With momentum fading for an economic recovery, most analysts have written down economic growth projections for the 4th quarter of this year, as well as for 2021.

Biden has increased his electoral college lead over Trump in the most recent 270 To Win consensus map of nine nonpartisan organizations. The map currently projects 290 votes for Biden (20 above the 270 that he needs to win), with five states (Iowa, Ohio, North Carolina, Georgia, and Florida) still considered toss-ups, totaling 85 electoral votes. 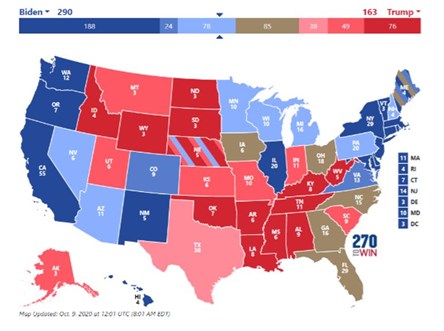 In the polling for the past week, Biden has extended his lead across most of the states that are still considered competitive. In addition, Biden now tops 50% in most of these states while Trump's percentage remains in the low-to-mid 40's. 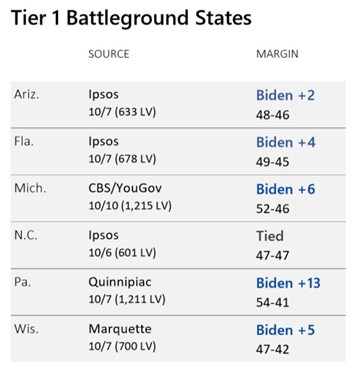 Biden has enjoyed a significant financial advantage over Trump, which he has put to good use in these battleground states. Since early September, according to the Wesleyan Media Project, Biden has spent over $95 million on television and radio ads. Trump has only spent $41 million in these states. For the week ending on Monday, Biden’s $36 million expenditure is double Trump’s $18 million for the same seven-day period.

While Biden is now running paid media in 16 states, including a just-announced $6 million buy in Texas, Trump has stopped running ads in Ohio, Iowa, and New Hampshire and has reduced his spending in Wisconsin, Michigan, Nevada, and Minnesota. This is a tactical move by the campaign to increase paid media in Florida, Georgia, North Carolina, and Pennsylvania.

Since the beginning of September, according to Advertising Analytics, the Biden campaign has spent nearly $15 million on radio ads across the country, compared to less than $270,000 spent by the Trump campaign across 7 states during the same period of time.

They are both spending roughly the same amount of money on Facebook ads.

According to Targetsmart, at least 8,794,343 votes have already been counted, which is 6.4% of the total votes counted in the 2016 general election.

As expected, the Democrats have an overwhelming advantage over the Republicans in early voting. 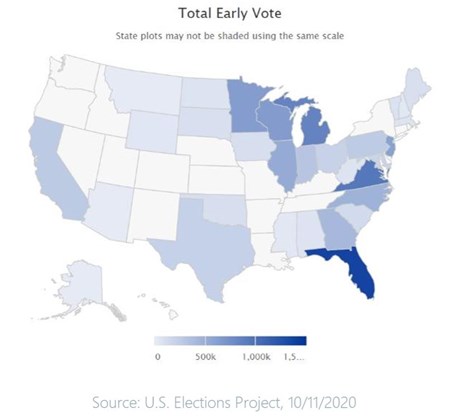 As Trump's fortunes continue to decline, so have the chances of the Republicans holding onto the Senate. Increasingly, voting at the top of the ticket determines the outcome of Senate elections. In 2016, the outcome of every Senate race was determined by which Presidential candidate won the state.

In the most recent Cook Political Report, the Republicans are currently defending 12 of the most competitive races in the country. When including the sleeper race in Alaska, there are 13 seats in play for the Democrats. Democratic candidates are well ahead in Arizona and Colorado, leading in Maine, Iowa, and North Carolina (although it is unclear how much the sexting scandal will hurt the Democrats), and in dead heats in South Carolina, Kansas, Georgia, Montana, and Alaska.

In addition to the drag that Trump is putting on the rest of the Republican ticket, the Democrats have also enjoyed a significant advantage this year in TV ad spending in Senate races. According to NBC, Democratic candidates have almost a two to one advantage over the Republicans in the purchase of television ads this election cycle. Democrats have spent $135 million, compared to only $71 million for Republican candidates. When taking into account outside group spending, Democrats still enjoy a distinct advantage, having spent $345 million compared to $288 million for the Republicans and their allied groups.

In South Carolina, Democrat Jaime Harrison announced today that he brought in $57 million dollars in the last fundraising quarter, more than any candidate in history over the same period of time. He has now raised over $86 million dollars and has spent over $52 million on television and digital ads, compared to only $19 million for Republican incumbent Lindsay Graham.

This is a pattern in other races across the country as well. 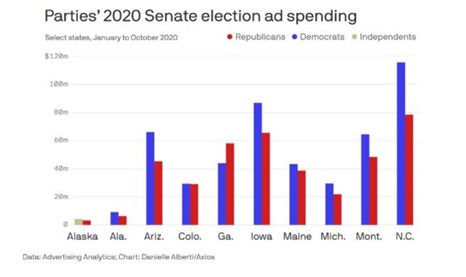 The final debate between Trump and Biden, scheduled for October 15th, has been cancelled.

At this time, there remains the possibility that the  October 22nd debate at Belmont University in Nashville, Tennessee will proceed as planned.

The Wall Street Journal
Biden, Pence and the Wish for Normalcy
By Peggy Noonan

The New York Times
Trump Told Supporters to ‘Watch’ Voting. His Staff Is More Than Watching.
By Danny Hakim and Stephanie Saul