Ingo Rübe, founder and CEO of BOTlabs, sees open source as a vehicle to help shape the next stage of the internet.

Berlin has undergone a metamorphosis from historical capital to a hip startup hotspot, a magnet for tech freaks around the world. Ingo Rübe is one. 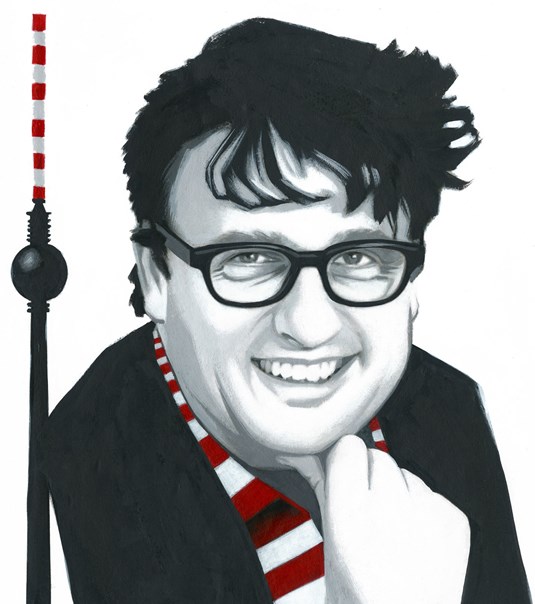 A punk rocker in the city in his youth, he earned a degree in information technology and became first a Director at Axel Springer and later CTO at Burda, a big-name publishing house. He is a fan of cool tech, and drives a Porsche with a hybrid engine. In jeans, sports coats and big glasses, he is cool but not conspicuous.

Recently, Mr. Rübe founded BOTlabs, his latest project in cooperation with Burda. The future of the internet, he feels, is more democratic, enabled by blockchain and open-source technology. Burda, in turn, recognizes that it has benefited from Mr. Rübe’s expertise and vision and has absolute faith in the project, in which it holds a minority stake.

Prediction always involves risk. Are you a gambler at heart?

No, not at all. I just look at the facts and trends and put them together. Some developments can be forecast with remarkable accuracy this way. Hardly anyone believed me in the late ’80s when I told my punk friends that they will all end up with an email address in 10 years’ time.

You were a punk?

Yes, indeed. Berlin in the ’80s. Clubs, concerts – alcohol as well. A long time ago. I still go to punk concerts, but only now and then.

How did you come to be an early champion of open source?

Open source is actually a lot like knowledge. In the digital society, fundamental software is like education – it has to be accessible to everyone free of charge. This not only ensures equal opportunities, it also provides a lot of protection for companies’ investments in innovation.

Today, 95 percent of all business server systems run on the open-source operating system Linux. Web servers and database systems are similar. Look at HTTP [hypertext transfer protocol – a set of standards that serve as the foundation for the World Wide Web]. Without HTTP, there would no e-commerce, no social networks and not even news on the internet. Around 80 percent of the 11,000 jobs at Burda would never have been created without open-source technology. If HTTP’s inventor Tim Berners-Lee had charged a one-cent licensing fee for every visit to a website, the World Wide Web and the millions of jobs that are connected to it would never have been created.

You convinced Burda to adopt the open-source content management system Thunder. What was the reasoning there?

Burda had hundreds of content management systems for hundreds of websites. That was very wasteful. My job was to clean up this mess. We did not want to end up being dependent on a single vendor so, with open source, we sought to create a community of publishers to jointly develop the system.

Burda sites switched over in record time with minimal costs. Three years later, hundreds of publishers use Thunder. A vibrant community was born, and Burda is benefiting without having to pay licensing fees. What’s more, Burda has become a very attractive employer for technologists and has gained a lot of credibility and standing in the market.

Our concept is in fact based on freedom. We don’t aim to make money with it directly. we want to be the enablers of a new economy.

Was there stiff resistance by more tradition-minded publishers?

Let me put it this way: For a long time, venerable publishing houses found it very hard to see digitalization as an opportunity. To stand out in the crowd of competitors, they were keen to develop a content management system of their own. But ultimately, publishers set themselves apart with content and reader retention. Fundamental technology should really be shared. No publisher builds a power station to run its websites. But to answer your question: It takes a lot of time and a lot of persuasion.

Now you’re predicting blockchain will be the internet’s next evolutionary stage. Why?

In its inception, the internet was a network for researchers. There were no plans to commercialize it. When that started to happen in the mid-1990s, the internet lacked key search, identity, payment and other such services – in internet-speak those are called “protocols.” Businesses emerged to fill that void at the application level. Today these companies are the world’s most valuable enterprises and have attained a mind-boggling dominance. The internet’s current structure favors this monopolization. Efforts to get a handle on the problem of these entrenched and unassailable internet companies have been largely ineffective because this is a technical issue rather than a business, legal or political problem.

How will blockchain technology revolutionize the Internet?

Blockchains will enable an organizational reboot of the internet at the technical level. We can use them to create open-source protocols that can do so much more than what the current internet does. With blockchain technology, we can send money at the protocol level, prove identities beyond any doubt, and order taxis or pizza without the help of an intermediary. This way, the internet gets the elements that it has always lacked, piece by piece.

What we failed to consider with the existing internet was that some vendors would accumulate vast silos of data with no incentive to share them. Blockchain technology will create these necessary incentives. This will culminate in a newly democratized internet.

What exactly will your new startup provide?

We want to develop a blockchain-based protocol that gives the power over personal data back to the individual. I believe personal data belongs to the individual user and not in the hands of monopolistic companies. Everyone should be able to decide for themselves if they wish to divulge data and when they want it back. The structure of BOTlabs as a company gives us the freedom to explore entirely new avenues without a commitment to constantly report or answer to special business demands.

A strong desire for freedom would appear to be a recurring theme in your life.

That’s a little too melodramatic. But our concept is in fact based on freedom. We don’t aim to make money with it directly; we want to be the enablers of a new economy. Anyone with a good idea for applications is welcome to use this protocol, be it a company or government. We aim to develop a standard that can be accepted in Germany, in Europe, and around the world. That’s our vision. The more participants, the faster we will achieve our undoubtedly ambitious goal.

Can you make easy money with this?

Let me be perfectly clear here: No, you can’t, at least not if you take it seriously and want to be taken seriously. We plan a cryptocurrency to reward service and good behavior in our ecosystem. We will retain around 10 percent of the total amount of money in circulation from the start, so we will benefit as the ecosystem grows and its value rises.

Your minority shareholder is not demanding a fast return?

No, smart managers at Burda realized that blockchain is an opportunity; you can either take it or let it pass you by. Europeans snoozed and lost out on the commercial internet’s development. Now they have the chance to spearhead the movement and design the blockchain internet.

Are you confident this prediction will be as accurate as the last one?

With my email prediction, I had no direct influence on the outcome. This time I will be working hard to make my prediction come true.

An hour of an executive’s time can lead to an entire month of content. Here’s how.