Four hundred and fifteen million adults around the world have diabetes. And the number is rising fast. Over the next 25 years, another 225 million adults are expected to get the disease – meaning one out of every 10 adults could be afflicted by 2040. For patients, diabetes is a disease for life. For healthcare systems, it is an unsustainable burden. Yet this impending epidemic in diabetes is not inevitable. Type 2 diabetes, which accounts for around 95 percent of all cases, is largely a preventable disease.

Pharmaceutical company Novo Nordisk describes the situation as “an emergency in slow motion.” As the world’s leading manufacturer of diabetes treatments, the company might be expected to focus exclusively on developing therapies – but Novo Nordisk thinks it also has a broader role to play.

“We can do more,” says Mike Rulis, Novo Nordisk’s Senior Vice President for Communications, Relations and Sustainability. Rulis has been with the company since 1984 and recognizes the activist spirit inside the business. “We see it both as an opportunity for us and an obligation, as a leader in the health industry, to get involved.” 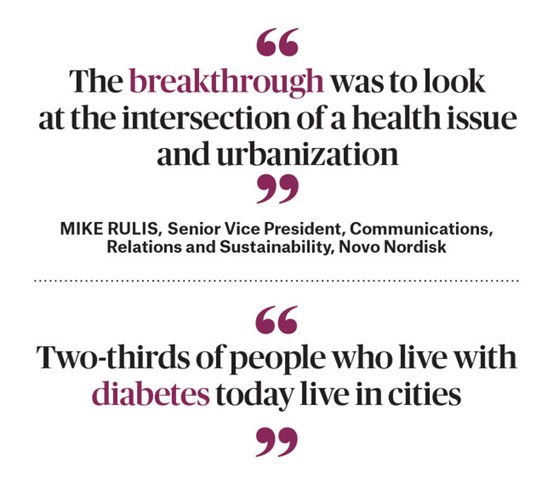 Over the last few years, the company has opened up a new front line in the global fight against diabetes: cities. Two-thirds of people who live with diabetes today live in cities, and that proportion will rise as cities rise. UN statistics for 2014 reported that, for the first time ever, more than half of the world’s population live in urban areas – a number expected to climb to two-thirds by 2050.

“The breakthrough was to look at the intersection of a health issue and urbanization. That’s where the problem is most pronounced, and where we have the most to offer,” says Rulis. “It’s a new way for us to articulate the alarming rise in diabetes.”

Together with select major cities around the world, Novo Nordisk launched a campaign to start a global fight against “urban diabetes.” The campaign, Cities Changing Diabetes, debuted in Mexico City, where diabetes has been identified by the municipal authorities as the No. 1 health problem for the metropolis’ 20 million-plus residents.

The company went on to partner with Tianjin, Shanghai, Copenhagen and Houston. Together with Mexico City, these five cities have a combined population of more than 50 million.

The first challenge was clear: more data was needed. In 2014, Novo Nordisk collaborated with University College London to conduct research with leading local academic institutions in each of the cities. The innovation was to shift the focus of the research to the social and cultural factors that influence diabetes, rather than the impact of clinical interventions – and use the cities as a living lab to learn from. “If we’re to have any hope of bending the trajectory of the potentially catastrophic rise in diabetes, we have to grapple with the factors that put people at risk in the first place,” Rulis says.

The findings challenged long-held assumptions. In Houston, for example, it wasn’t just the marginalized, low-income residents who were vulnerable, but the increasingly sedentary middle-class commuters who spend up to 90 minutes driving from the suburbs to the city. Elsewhere, different factors stop people getting treated, or even tested. In Mexico, for example, the disease is often seen as a psychological issue caused by what they call “susto” – the anxiety or stress of modern life. This makes it less likely that people will prevent or manage the physical causes of the disease. In Shanghai, worry over the stigma of being diagnosed leads people to hide the condition from family and friends, limiting their access to support.

In 2015, Novo Nordisk held an unprecedented global summit in Copenhagen that brought together Cities Changing Diabetes participants from around the world. City planners and urban lifestyle experts met with healthcare professionals, city officials and patient groups to share insights and discuss solutions. More cities came on board: Vancouver, Johannesburg and Rome. And Novo Nordisk committed $20 million to take the program forward.

“Now the cities, with these insights, are starting to move to action,” Rulis says. Some are focused on policy interventions at the city level, such as a three-year plan for diabetes in Shanghai. In Copenhagen, the research identified that isolation can be a key factor, as people without work, living alone or from non-Western backgrounds are often beyond the reach of the healthcare system – and that led to the launch of a new Center for Diabetes in 2016. The city has also teamed up with Denmark’s largest trade union, 3F, to initiate a peer-group support scheme for men over  the age of 45 who are “at risk.”

Most recently, the Robert Wood Johnson Foundation has awarded a three-year, $2.4 million grant to the program partner in Houston, The University of Texas Science Center (UTHealth), to establish a Healthy Cities Research Hub. The goal is that the city’s community-based model could serve as a blueprint to inspire future communities involved in the program. Novo Nordisk also partnered with C40, the global network of megacities focused on mitigating climate change, to put healthy cities on the C40 agenda – the first pilot study was published recently. “One of the reasons so many are keen to join is that this campaign is not about us,” says Rulis. “It’s about defeating diabetes, and tackling a problem that is very real for our partners.”

Through Cities Changing Diabetes, Novo Nordisk is making common cause with a host of stakeholders. “We have to forge cross-sector collaborations – partner with the leaders of health systems, engage with the people who plan and manage cities, connect with patient groups and community organizations,” says Lars Fruergaard Jørgensen, Novo Nordisk’s new CEO. “We want to be recognized not only for what we are doing, but how we are doing it.”

Pharmaceutical companies make money by making people well: the ultimate model of “social enterprise.” Yet the reputation of “big pharma” has been tarnished by a series of conduct issues over the years. As Novo Nordisk has grown into a large global company, it has sought to sustain its social license to operate. Rulis admits that they needed to overcome skepticism and earn trust. “Cities Changing Diabetes is one way to show us for what we are: a company that is socially relevant, not just relevant to shareholders,” he says. “Our key contribution is medicine and we’re proud of what we produce. But solving this issue will take more than medicine. If we want to be seen as the leaders in diabetes, we have to go back to the root causes. By working on the ground, we’re gaining insights about our customers, about the ecosystem of prevention and treatment.”

An ambitious spirit animates the Cities Changing Diabetes campaign and, according to Rulis, that is a key to its success. “Without that ambition this program would never reach a size where it would have meaningful impact on a global scale. What activists do is go for the cause. And through that, we hope to create a movement that will become much bigger than what we ourselves can accomplish.”

Last year, outgoing CEO Lars Rebien Sørensen topped the Harvard Business Review’s list of best-performing CEOs, which ranks leaders according to both financial and ESG metrics. He believes there is real passion at Novo Nordisk for the campaign: “It excites people to think that they can do something which can change the world – and I really do believe that we can,” Sørensen says. “I know for a fact that we are changing the world for people with diabetes.”