Drawing the Line on Deforestation

Business leadership on a critical issue

“THIS IS A PALM OIL FREE CAFÉ,” announces a sign in the window of a San Francisco coffee shop—but it could be a hipster café anywhere in the world, as people heed calls from environmental campaigners for a boycott of palm oil. Hollywood celebrities and insta-influencers have been jostling to lead the conspicuous non-consumption of palm oil, with lifestyle media helpfully publishing lists of palm-oil free products.

The public attention around palm oil is the result of relentless and imaginative campaigning by activist groups such as Greenpeace and others, who have successfully linked, in the minds of consumers, palm oil production with the destruction of habitats for the endangered orangutan. The campaigns have targeted brands containing palm oil—including Colgate, Doritos, Head & Shoulders, Johnson’s Baby Lotion, Kit Kat, M&Ms and Oreos. Their message to consumers is clear: These products are destroying rainforests and killing orangutans.

As demand for palm oil has increased, so deforestation has accelerated: Some estimates say that about 36 football fields’ worth of trees are lost every minute due to deforestation. Aside from the devastating impact on biodiversity, environmentalists are concerned that this is contributing to climate change: Deforestation represents up to 20 percent of all CO2 emissions, more than the entire transport sector. Despite years of pledges from the palm oil industry, rainforest destruction continues around the world. 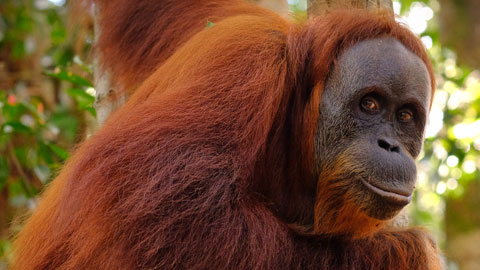 Increased demand for palm oil has seen deforestation accelerate: one estimate concludes 36 football fields’ worth of trees are lost every minute. Palm oil plantations are the habitat for orangutans, an endangered species. For many, these humanlike great apes have come to symbolize the issue of deforestation—and inspire the need for action.

Unsurprisingly, concern about these environmental impacts has affected the entire palm oil industry. As well as boycotts in major consumer markets, the European Parliament is driving through regulation, and US presidential hopefuls are talking tough on palm oil. It’s taking its toll: The palm oil commodity price has plummeted and share prices have fallen for the major palm oil companies.

An interesting time, then, to take the reins of one of the world’s biggest palm oil companies. In July 2019, Helmy Othman Basha became Group Managing Director of Sime Darby Plantation, which produces around 2.5 million tons a year, and is the largest producer of Certified Sustainable Palm Oil. As such a big player, Sime Darby was feeling the effects of the pressure on palm oil. “My first reaction was this just isn’t fair!” confides Mr. Basha. “After all, we’ve been recognized as leaders in sustainability for many years. We’re not the ones doing the deforestation.”

Sime Darby Plantation was a founder member of the Roundtable for Sustainable Palm Oil (RSPO), and 30 years ago it was the first company to introduce a “zero burning policy.” The company has a long track record of implementing sustainable practice. “But I realized that it wasn’t enough for us to concentrate on the sustainability of our own practices alone,” he says. “We are a leading player in the industry, and deforestation is an industry problem. That makes it our problem. So, I want us to play our part in finding a solution.”

Of course, creating a deforestation-free supply chain will not be an easy task. “Like all the big players, we have a really complex supply chain, complicated by a large number of players,” he explains. “We have dozens of refineries, sourcing from hundreds of mills, supplied from hundreds of thousands of plantations, and hundreds of thousands of small holdings. It means that the biggest challenge in tackling deforestation in the industry is traceability.”

The logic was simple: to achieve a deforestation-free supply chain, traceability is the front line. Sime Darby had already been working on it. For the past two years, the sustainability team had been amassing data on the supply-chain, which could be used to paint a comprehensive picture right down to the mill level. “There was an opportunity here to build a powerful resource,” Basha recalls. “It could help us shine a light into areas that have not been easily visible before.”

Other oils use up to 9 times more land to produce the same yield as palm oil.

At their AGM in 2019, Sime Darby launched “Crosscheck,” an open-access online tool that allows anyone to trace Sime Darby’s supply to the mill level. An important feature is that it locates each mill in its surrounding landscape, with overlays that identify risk areas of intact forest and the habitats of endangered species. In addition, users can click through to satellite imagery that monitors changes in the forest.

Crosscheck also provides new information on the ownership of each mill, creating the opportunity for improved traceability and accountability across the extensive supply chain. The tool is specifically designed for anyone who is concerned about protecting forests, and the role of the palm oil industry in deforestation—that includes corporate buyers who want to ensure their brands are not linked to deforestation, and investors who want assurance that their financing is not associated with deforestation.

“We’re inviting people to use Crosscheck,” says Basha, “and to alert us if they identify a problem on the ground, so we can take action.”

Conservation groups welcomed the initiative. Conservation International described it as a “major step forward” and a “first of its kind for the industry.”

At the end of 2019, Dr. Simon Lord, Sime Darby’s Chief Sustainability Officer, was named on Eco-Business’ “A-List” of the most influential sustainability leaders in Asia Pacific—testimony to his achievements in a long career in the field. Under his leadership, the company has established initiatives across the responsible business agenda, from sustainable agriculture to human rights and exploitation. Two years of painstaking work from his team—mapping sources of supply, supply relationships and landscape risk—made the launch of Crosscheck possible.

But Crosscheck is just a first step: The point of traceability is to eliminate bad practice in the supply chain. Over time, NGOs have become frustrated at the industry’s lack of urgency. There has been a tendency to engage problem suppliers in long and drawn-out discussions that don’t result in change and seem only to provide cover for continued deforestation. But in a clear sign of determination to “draw the line,” Sime Darby has begun swiftly suspending mills that are found to be violating the company’s commitments on deforestation.

Sime Darby created a video to explain how to use Crosscheck, a cutting-edge online tool which allows users to check up on Sime Darby Plantation’s mills and refineries.

Cutting out offending suppliers sends a strong signal, but Basha insists that it’s not enough. “Just suspending suppliers does not improve their practice, and often has the unintended consequence of driving poor practice elsewhere in the industry’s supply chain,” he says. To deal with this risk, Sime Darby is introducing a new policy: As long as a non-compliant supplier stops forest clearance immediately, Sime Darby will work with them to help improve standards in their operations.

“We have to keep in mind our ultimate goal,” he says. “We want to create a larger base of sustainable oil palm companies, and so drive deforestation out of palm oil production.”

Crosscheck has been designed as a platform that can incorporate more data over time. “Think of this as Crosscheck 1.0,” says Basha. “We want to understand how to build on the functionality, to make the tool as effective as possible.” To do this, Sime Darby is in dialogue with NGOs, with palm oil customers, as well as the industry’s investors and bankers. “We know we don’t have all the answers. We want to learn from others and collaborate to make the best use of the information that Crosscheck can provide,” Basha says. Ideally, consumers will be able to use the tool to ensure their purchases aren’t contributing to deforestation.

A new spirit of collaboration is starting to shake up the industry. In late 2019, a coalition of 10 major palm oil producers and buyers announced a joint project to support and fund the development of a new, publicly available radar-based forest monitoring system known as Radar Alerts for Detecting Deforestation (RADD). Alongside Sime Darby and some of its industry peers, the coalition includes the likes of Nestlé, PepsiCo and Unilever. Preliminary results indicate that the new RADD system can detect tropical deforestation several weeks earlier than optical-based satellite systems—so it’s possible to respond more quickly than ever before.

So does Basha think that Sime Darby’s actions to “draw the line” on deforestation could allay the concerns of consumers in Europe and the US, and bring an end to the palm oil boycotts? “Boycotts aren’t the answer. Oil palm is a very efficient crop—it’s fast-growing and incredibly productive,” explains Basha. To get the same yield from other oil crops takes up to nine times more land. “Boycotting palm oil could be really counter-productive, leading to more habitat loss, more species loss, not to mention the impact on the livelihoods for smallholder farmers.” World Wildlife Fund in Malaysia agrees: “Boycotting palm oil is neither an answer nor a solution. In fact, it can only make things worse,” they say. In their view, the key is that when cultivated properly and planted in the right places, production of palm oil would not negatively impact the environment.

Palm oil is in everything from soap to chocolate. To the left is the path from palm tree to the refined palm oil that winds up in the products we use every day.

That’s why getting more oil from less land is the next frontier of Sime Darby’s fight against deforestation. The company has invested in an extensive R&D program dedicated to increasing yield. It has completed the mapping of the palm oil genome, which is enabling the use of gene editing to produce new high-yield oil palm seeds. Breakthroughs like this have the potential to make a direct contribution to tackling deforestation. For Sime Darby and other industry players, it presents the possibility of future growth without further land clearance.

Sime Darby’s ambition to create a deforestation-free supply chain for palm oil is an example of a company turning to confront the most critical issue it faces. Instead of relying on its own historic credentials in sustainability, Sime Darby Plantation is setting out to raise the bar for the industry.

“This industry has been critical to providing economic prosperity and livelihoods for our country and for the region over many years. And we’re all proud of that—and are beneficiaries of that,” Helmy Basha says. “But we will undermine the long-term prospects of the industry if, as a sector, we do not operate in a different way and with a different urgency to conserve the forests that remain. We’re working to higher standards today than we did in the past, and standards and expectations will continue to evolve from here.”

“We know this is a journey,” Basha says. “We know there will be mishaps along the way—but we will handle them and keep pushing for greater transparency to drive deforestation out of our supply chain and our industry.”

The head of the UN’s World Food Programme talks to Brunswick’s Robert Moran about the role of business in global food security.

When Sierra Leone was in the throes of the deadly Ebola outbreak, Africell mobilized a comprehensive response. Brunswick’s Sam Williams talks to the CEO.