The head of the UN’s World Food Programme talks to Brunswick’s Robert Moran about the role of business in global food security.

David Beasley leads the mobilization of financial support and public awareness in the global fight against hunger. He serves as Executive Director of the World Food Programme, a position at the level of Under-Secretary General of the United Nations. In 2017, the year he took over its leadership, the organization was credited with keeping four countries from slipping into famine.

He has worked in the service of society for over 40 years. With a doctorate from the University of South Carolina School of Law, Mr. Beasley previously served as Governor of South Carolina, one of the youngest in the state’s history. Prior to that, at the age of 21, he was elected to the South Carolina House of Representatives. He has received a Profile in Courage Award from the John F. Kennedy Library Foundation and he is a 1999 Fellow of the Institute of Politics at Harvard University’s Kennedy School of Government.

Saleh and his family live in a tent after fleeing recent fighting in the Bani Hassan area. When they cannot afford breakfast they only have tea.

Formed in 1961, the World Food Programme was an experiment at the suggestion of outgoing US President Dwight D. Eisenhower to see if the newly formed United Nations could deliver food aid. The project was thrown immediately into handling a series of crises, beginning with a 1962 earthquake in Iran that killed more than 12,000 people and disrupted food supplies. It quickly proved effective and has gone on to foster food resource networks, including school meal programs, all over the world.

Beasley is proud that the World Food Programme has contributed to a radical change in society over the last 100 years, as we’ve moved from a world where poverty and hunger were the most common experience to one where they affect only a minority. We talked to him about the organization’s evolving mission, and the role that corporations and businesses play.

How have you shifted the focus for the World Food Programme? What are your top priorities?
In the humanitarian world, WFP is considered the best of the best. We have special expertise in logistics and supply chain, so when there’s a crisis or an emergency—for example, Cyclone Idai in southeastern Africa in March of this year—the entire humanitarian community relies on WFP to get food and other essentials to people quickly. One of our top priorities is to maintain this leadership, to continue to improve our emergency preparedness and operations. We’re working harder to make our operations more efficient by decentralizing decision-making and streamlining how our Rome headquarters helps and supports our teams on the ground.

We are also putting additional resources and emphasis on programs that can help foster economic growth and transformation. When I was Governor of South Carolina, I worked hard to transform the state’s economic production from textiles and agriculture to high-tech manufacturing. Government played a role, not to dictate outcomes, but to create pathways for businesses of all sizes to grow. We’re applying that same philosophy at WFP: Our Food for Assets programs help put people to work on infrastructure that enables agriculture and other markets to flourish; our school feeding programs keep children in school so they can learn and be prepared for the future—and in many areas we also use locally grown produce for the food itself. I could go on and on.

As economies get stronger, they also get more resilient. That means the people need less international aid. Research suggests this work contributes to the ability of a region or country becoming more stable politically, and a more stable country is a more peaceful one. Conflict is a major driver of increased hunger, so the more we can do long-term work that fosters peace and stability, the better off the entire world is.

How are the issues the same as 1961 and how are they different?
That’s a nearly 60-year time frame in which the world’s population grew from about 3 billion to about 7.5 billion, but the number of hungry people has declined from more than 1 billion to about 820 million. That’s a huge achievement. A lot of factors went into that success, including the free-enterprise, capitalist system that has created so much wealth globally. Whatever tweaks people might want to make to that economic system, there’s no doubt in my mind that the economic growth it creates has reduced hunger in major proportions. We’ve seen hunger go up in the past few years, though, and that’s largely because of conflict.

Today, it’s not enough simply to feed people, though of course in an emergency like a cyclone or a war that’s what we do. We have a dual mandate—to save lives, but also to change them, through development that can make countries stronger. The goal is focused more on the long term, on the root causes, and how we create a strategic transformation that enables a community, region or country to succeed on its own. That’s the core philosophy behind WFP’s motto: saving lives, changing lives. 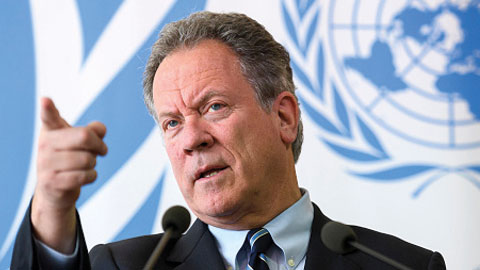 How can business leaders take action? How can they engage with the World Food Programme?
We absolutely need business leaders and the private sector to be involved in the fight to end hunger. We’ll never meet that Zero Hunger goal without them. Put simply, we need help from the private sector in three areas: to provide expertise, to help build our capacity, and to help us with funding. DSM helps us improve the nutritional quality of our food basket; Ericsson deploys telecommunications people during emergencies; Renault Trucks provides on-the-ground training to our mechanics in the field; Mastercard supports digital vouchers and is a top funder for our school feeding programs. That’s just some of the list. Each company finds a way of contributing that matches their core skills base.

We’ll receive a total of about $7 billion this year for our operations, most of which come from governments. But the total need out there is probably around $10 billion, and we can’t bridge that gap without the private sector’s help. We need the private sector more strategically engaged to truly help solve these problems.

When businesses work with us, they help us do more than simply feed people. They help us build economies that have stronger, more efficient markets. That’s a win-win—good for us and the people we help, and good for the businesses that want to operate in those countries. And as I tell business leaders all the time, if you want to really make a difference, a real and long-lasting impact on the world, you need to work with WFP.

In 1820, 94 percent of the world’s population lived in extreme poverty. Now, it’s 8 percent. We can help drive that even lower if we effectively tap into the unique capabilities of the private sector.

South-South cooperation is an important component of the WFP’s strategy. How are businesses joining in that cooperation?
One really important part of South-South cooperation is to make sure we’re supporting our country offices. They know how to build the best partnerships for local-level impact. So while we work with global companies, we’re making sure that it is about offering local solutions and drawing on local expertise because that creates a really important resource.

One example is called the Farm to Market Alliance, a public-private consortium which operates most specifically in Kenya, Tanzania, Rwanda and Zambia. We have seven financial institutions, agribusinesses and farmer’s groups all working together to try and make sure that smallholder farmers can do more than subsistence farming. One of the biggest problems in agriculture is the lack of an operating market for the small farmer. They don’t have the roads or other economic infrastructure. The FtMA helps these farmers find commercial buyers for surplus crops and also shows them how to improve yields so they can have more to sell. Since 2015, it’s helped about 150,000 farmers. In the next three years we expect that to grow to 1.5 million, generating $500 million of new market value by 2022.

We’re also helping develop and encourage South-South cooperation by working with three Centers of Excellence—one in Brasilia, one in Beijing and a new one that I visited earlier this year when it launched in Abidjan, Côte D’Ivoire. These centers help make it easier to share expertise in areas such as nutrition, school feeding or agriculture, and companies like DSM get involved to help build that technical expertise and encourage innovation.

You’re in the field in some of the poorest and most fragile parts of the world. What part can digital technology play?
If we are serious about the Sustainable Development Goal of ending hunger by 2030, we have to do more to harness the power of technology to deliver services efficiently and also to raise additional resources.

We want to be fully data-driven in our operational and organizational decision-making. To me, one of the keys is to make sure we know in real time who is receiving what help, where that help is being delivered and at what cost. There are three main reasons: First, to make sure that those who need help the most are getting it. That’s a core humanitarian principle, prioritizing assistance to those who need it the most. Secondly, we want to be both efficient and effective in that service delivery. Building up our digital capabilities in biometrics and other technologies will give our donors the confidence that we are using the money from their taxpayers effectively.

The other aspect has to do with advocacy, awareness and fundraising. Only about 1 percent of our $7 billion-plus this year will come from private sources, and there’s only so much more money we can raise from governments. That means we need to do much more to raise awareness about global hunger and about what can be done about it and how people can participate. We’re putting more emphasis on making sure people know how they can contribute. Bottom line, with all the wealth in the world today, there’s no excuse for children going hungry.

Who is the most inspiring person you have met as the leader of the WFP?
WFP has given me a never-ending stream of inspiring people. I think of this woman I met in Niger. She was standing on the top of a hill, talking about the successes she’d had recently with her small farm, thanks to some help we’d given her community. I remember her saying, “Now I feed myself, my family and my village.” It’s just so inspiring to talk to someone like that, who is so determined to help not just herself but others.

Another person that comes to mind is Abiy Ahmed Ali, who won the Nobel Peace Prize this year. I knew him before I came to WFP but have worked with him even more closely since. It’s great to see his hard work, on behalf of Ethiopia and Africa, get the recognition it deserves. The world’s biggest problem is brokenness, so when someone succeeds at repairing that brokenness, at helping other people love their neighbor as themselves, it really is inspiring.

Robert Moran is a Brunswick Partner based in Washington, DC, and leads Brunswick Insight.

Drawing the Line on Deforestation

When Sierra Leone was in the throes of the deadly Ebola outbreak, Africell mobilized a comprehensive response. Brunswick’s Sam Williams talks to the CEO.