Retail investors cheer on the activists

Activists find an unlikely ally in the pursuit of shareholder value

When thinking about the most important type of shareholder to court during a proxy fight, who comes to mind? Your answer will be the same regardless of whichever side you are on: institutional investors.

No surprise, since they hold sway among most publicly traded companies.

But there is another important shareholder group that is finding its voice, as shown by the decisive role it played in the recent defeat of Nelson Peltz in his proxy battle with DuPont: retail investors.

There has been scant research into this group’s attitude toward shareholder activism, but Brunswick Insight’s inaugural survey of retail investors who are active in their personal investments makes clear that their loyalty to company management cannot be assumed. As activists continue to launch aggressive public campaigns against corporations, management may find themselves having to work hard to win the votes of these individual shareholders.

Not only are the majority of retail investors paying attention to shareholder activism, but they also say they would be prepared to respond in some way to an activist investor’s proposal.

More than four in five retail investors (82 percent) say they would be likely to vote on a plan put forward by an activist. Forty-four percent say they have taken some action in the past 12 months as a result of an activist’s suggestions, either by voting on the proposal, by changing an investment position or by researching an activist’s ideas.

Retail investors believe today’s business environment is ripe for activism. More than three-quarters (77 percent) say companies are too fat and should be returning cash to shareholders, and more than half (51 percent) do not think the board is working in their favor.

Although often characterized as “pro-management,” nearly three-quarters (74 percent) of retail investors say that activism adds value by pushing management to make hard decisions. Activists are seen to be constructive, rather than destructive, by a majority of investors in all age groups, genders, political affiliations and wealth levels.

It appears that retail investors are convinced they have good reason to look outside the company for help maximizing shareholder profits – a troubling indicator that bodes well for activists but could leave unprepared management in a defensive position.

While some experts believe shareholder activism is disruptive to company management and bad for the economy (see “Corporate defender”), retail investors tend to side with high-profile hedge fund managers such as Bill Ackman, who claim activism has the potential to add long-term value (see interview). This finding fits with the low trust that retail investors place in management, seen elsewhere in the survey 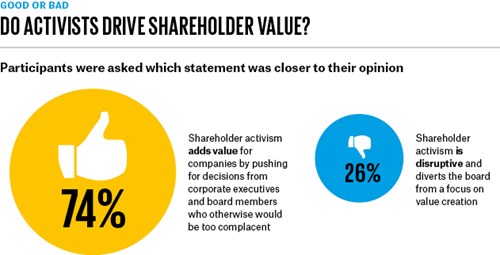 Of the 68 percent who have heard the term “shareholder activism,” 11 percent are very familiar with it and could explain it in great detail; 33 percent are somewhat familiar but do not know all the specifics; and 24 percent are not too familiar with it but have heard of the term. As activism becomes more prevalent (see “Barbarians inside the gate”), we can expect retail investors’ familiarity with the concept to continue to increase, along with the influence of activists 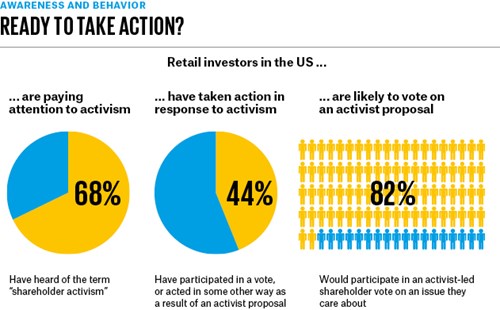 Given the lack of trust in corporate boards displayed here, it is not surprising that retail investors want to push for an increased focus on returning shareholder value. Annual survey results by the University of Chicago (1972-2014) find social trust levels are declining with each generation. Social trust is defined as a belief in the honesty, integrity and reliability of others – a “faith in people.” That decline could fuel a rise in discontent among retail investors, making the task of engaging them even more imperative

Issues that make retail investors tick are not necessarily the same as those that are top-of-mind for activists. Compare the results, left, with the chart called, “Boards in the crosshairs.” While executive compensation takes the No. 1 and No. 2 spots for retail investors, remuneration ranks as a low consideration for activists. Ineffective management and the make-up of boards, however, are high on the list for both retail investors and hedge fund activists 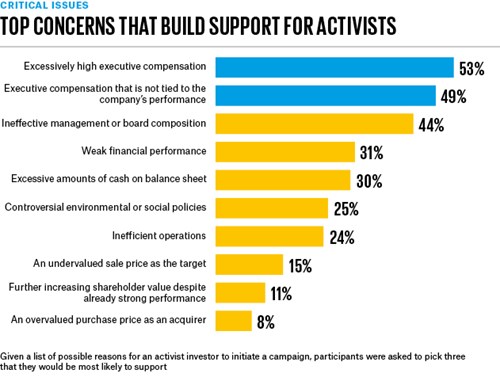 Employees are seen here as being among a company’s best ambassadors. Activating them may help win retail investor support. (Read how they can help a social media campaign in “Activism goes digital”)

Retail investors trust financial news media most as a source of information on a shareholder campaign, more than both the activist and company representatives. This highlights the importance of maintaining an active media strategy in all channels, led by top company representatives (see “Hail to the campaigner-in-chief”)

Robert Moran leads Brunswick Insight, the group’s global public opinion research function, and is a Partner in the firm’s Washington, DC office. Kaylan Normandeau is an Associate on the Brunswick Insight team in New York.

This research is based on a June 2015 survey of 801 US retail investors who actively trade stocks, mutual funds, bonds or other products, outside of retirement funds or real estate investments, and who play an active role in decision-making about their investments

As CEO of Walmart, he has rewarded shareholders and other stakeholders. Now he brings his sense of purpose to his new role as Chairman of the US Business Roundtable.

Warren Buffett’s writer and editor of choice, Lawrence Cunningham, explains how the investor has acquired hundreds of subsidiaries – and never sells them

From a depth of experience that dates back to the hardscrabble 1940s, this prestige beauty industry legend surveys the world’s current travails and sees opportunity.