Staying ahead of the activists | Brunswick Group
Shareholder Activism

Staying ahead of the activists

Most of our clients are investing to meet their long-term financial goals, such as retirement income. Many are in indexed portfolios so they are, in effect, locked-in shareholders. We use our voice on their behalf to ensure companies are being well led and well managed. We don’t see our corporate governance guidelines as a set of rules that has to be complied with, but more as a benchmark against which we can assess the quality of leadership demonstrated by the board and the quality of management’s execution.

How does that affect your views on shareholder activism?

We try to couch all our conversations around corporate governance. In activist situations, we use that as the framework to assess what the activist is proposing, as well as the company’s track record and counter-arguments.

Are you less concerned about the economics of these public companies?

No, we’re absolutely concerned with the economics, but over time. With some shareholder activist campaigns, there will be a share price reaction in the near term if a company does what an activist is asking, but we’re concerned if that sets the company up to be weaker in the future.

How is the investment industry changing in response to growing activism?

In the past five years, many major institutional investors have expanded their teams, in large part because there is greater client interest in how we engage companies, particularly following the financial crisis. Corporate governance teams are more willing to engage with activists because we want to make informed voting decisions, which means understanding the position of both the activist and the company. Activists typically choose companies where change appears to be needed – where there’s a consensus that something is not working. As a result, activists often get a pretty good hearing from mainstream investors. The activists have also become more sensitive to the concerns of institutional investors and are positioning their proposals in a more long-term context. In short, everyone has upped their game on the governance and engagement front.

Do you think more companies are listening to investor concerns?

Each year it seems that more companies seek engagement with us. Activism and “say on pay” are two drivers. Companies also seem to value the insights they gain from talking to shareholders directly, especially if investors have concerns about performance or governance.

How should companies engage with large institutional investors like BlackRock?

More companies now understand that they must build relationships with their long-term, long-only investors. Boards should know who to call and how to have that conversation before stressful circumstances arise. We don’t want to have one-on-ones with every board member in corporate America, but it is worthwhile for a company to set out a five-year engagement strategy to ensure that its lead independent director and chairs of key committees have met the top 50 shareholders. That way, the communication channel is open when the company needs to speak with investors if there is a crisis, or an activist shows up as one of the largest shareholders.

How much time does BlackRock spend engaged with activists?

Activists obviously have a lot vested in these individual situations, but it’s important to be mindful of the fact that from our perspective, each company is just one of many we’re invested in on behalf of our clients. Activists often want us to sit down for a whole day with them to walk through the detailed analysis they’ve done on a company, but our priorities have to be different. That said, in sensitive situations, or if a campaign leads to a proxy vote, we will devote the time to understand the position of the activist and the company involved.

How often does BlackRock support activists?

Only a small subset of activist situations come to a vote. In about half of those that do, we support the activist, but we very seldom support the whole slate that an activist puts forward. We might vote in favor of one or two of their candidate nominees, usually because the company has not been responsive, does not seem to understand shareholders’ concerns, or focuses on belittling the activist rather than providing a credible counter-argument.

How is corporate governance in the US different from Europe and other regions, and does that have an impact on the amount of activism in those countries?

One of the most significant differences between the US and other markets is that majority voting on directors is established as a right in corporate law nearly everywhere else. That’s an accountability mechanism. Directors can be voted off the board if they are unresponsive to shareholders. That leads to more frequent and more productive dialogues.

So there is a history of closer engagement between investors and boards outside the US?

Yes. If you look at the voting statistics, you’ll see that shareholders haven’t voted many directors off the boards of European or Australian companies, for example. They don’t have to. They’re able to have more engaged conversations with the board and express concerns, and the directors know they will be held accountable.

Furthermore, business communities are much more concentrated in other markets than they are in the US. As a result, investors in London, say, or Sydney, are regularly mixing with company representatives, including board members, at industry events. So, there is a significant level of informal engagement, not specific to a company situation, which helps establish relationships. It wasn’t that long ago in the US that it was considered highly controversial to put investors and directors in the same room.

Is the behind-the-scenes engagement that tends to happen in Europe a good or bad thing?

I find the public nature of activist campaigns in the US frustrating, because one side is always presented as the winner and the other as the loser. These situations are more nuanced than that. To say one side won or lost is unhelpful to the company, to the shareholders and to the reputation of activism.

A lot of activists raise valid concerns but they’re not always right. If activism was done privately rather than through the media, the appropriate change – though it might take longer – would come about and would be far less disruptive to the company. In Europe, shareholders have greater access to companies and it is easier for them to communicate with each other, so change can happen in a less publicly confrontational manner.

How do you see the corporate governance landscape continuing to change?

There is more substantive engagement now between company management, boards and shareholders. That’s a positive sign and activists have been a catalyst for that. If boards and management listen to shareholder concerns privately, they may find remedies before an activist targets them.

In one-on-one meetings with companies, mainstream investors are often signaling concerns in the way they ask a question or focus on one thing over another. Companies are often not very attuned to those messages. Being more aware of that and listening for what’s not being said could help companies respond before issues escalate.

In addition, in situations where boards were aware of the issues but weren’t able to take action quickly, having better communication and a stronger relationship on the long-term side – on the governance side – helps earn investor support in the near term. 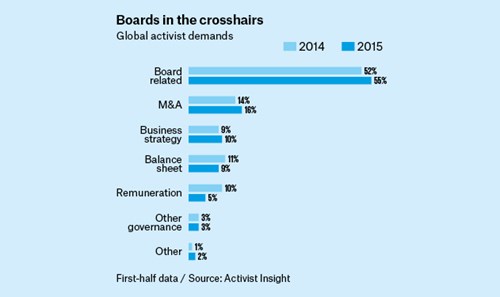 Are there other aspects of shareholder engagement that companies should consider?

Companies should use their regular communication channels – including quarterly earnings calls – to better get across the message about how they are creating long-term value. It starts with the proxy statement, but should be reflected in website content, supplemental materials, letters from the board and other presentations.

In addition, companies need to get much better at talking about how they’re managing their environmental and social impacts. These can be financially material issues and need to be handled well, as they indicate management quality. If management is unconsciously risking the company’s reputation, what else is not being well managed? It could be a signal.

Finally, what is the role of a company’s reputation in an activist campaign?

A company’s reputation can take a beating during an activist campaign. However, being under the spotlight of an activist could even be an opportunity to articulate the company’s strengths. Boards and management should have the courage of their convictions.

Negotiation is right when the activist’s proposals would enhance the company’s long-term success. But management shouldn’t capitulate in the hope that it will make the activist go away. That’s not good for the company’s reputation or for the reputations of the individuals involved.

Michelle Edkins is a Managing Director at BlackRock and Global Head of its Corporate Governance and Responsible Investment team, comprising 22 specialists based in five regions internationally. She also serves on the firm’s Human Capital and Government Relations Steering Committees.

Monika Driscoll is a Partner in Brunswick’s New York office. Formerly an analyst, she focuses on shareholder activism defense, and mergers and acquisitions.

Additional reporting by Emily Levin, an Associate now based in the firm’s Johannesburg office.