Open, diverse and inclusive societies are better for business, economies and individuals. By Brunswick’s Jon Miller and Lucy Parker

In recent years, parts of the world have seen a growing culture of respect for lesbian, gay, bisexual and transgender individuals, and their ability to fully participate in society is often protected by law. Elsewhere, however, there is rising antagonism toward LGB&T people, who are suffering discrimination at the hands of politicians and lawmakers.

There are now more than 80 countries with laws that are repressive to sexual minorities and hostility is growing, fueled by a toxic mix of religious fundamentalism and populist politics.

The growth of anti-LGB&T sentiment has become a concern in the boardrooms of many leading global businesses. Open, diverse and inclusive societies have proven better for business, and better for economic growth.

To stem the spread of anti-gay laws, 20 international corporations have come together to launch Open For Business, a coalition that seeks to make the business and economic case for LGB&T rights. The partners are Accenture, American Express, AT&T, Barclays, Brunswick, Burberry, EY, Google, IBM, Inditex, LinkedIn, Linklaters, MasterCard, McKinsey, Microsoft, Royal Bank of Scotland, Standard Chartered, Tesco, Thomson Reuters and Virgin. Each contributes its time, resources and reputation – the first time businesses have joined together to tackle this challenge.

Alongside the moral case for LGB&T rights, there are powerful business and economic arguments. A comprehensive report published by the coalition, “Open For Business: the Economic and Business Case for LGB&T Inclusion,” finds evidence on three levels:

The world’s most respected business leaders are speaking up for LGB&T rights. Apple’s CEO Tim Cook added his voice in an opinion piece for The Wall Street Journal, entitled “Workplace Equality Is Good for Business.” He argues that equality is a critical part of the creativity that drives Apple. In a piece for Bloomberg Business on his own sexuality, Cook says that equality in business is good for society. “Part of social progress is understanding that a person is not defined only by one’s sexuality, race or gender,” he says.

It’s not just boardrooms in the West that are discussing this issue. Multinationals based in emerging markets are also enacting explicit policies against LGB&T discrimination. Companies such as ArcelorMittal, DP World, Embraer, Lenovo, Mahindra, Sasol and Tata, are among those that recognize the need for inclusion and diversity to compete in the global marketplace.

In fact, the way a country behaves toward the LGB&T community can serve as a “canary in a coal mine.” Evidence suggests that discrimination is accompanied by corruption and a broader lack of transparency. Inclusion, on the other hand, signals a healthy market in which to do business.

LGB&T inclusion is also a bellwether for talent – another indicator of the health of a company. A business that embraces LGB&T staff is likely to know how to get the best out of its people. Promoting diversity and inclusiveness clearly signals an open and progressive workplace for all employees.

All the evidence shows that discriminatory policies are bad for the reputation, productivity and economic well-being of countries and businesses. Countries with low levels of corruption and high levels of innovation, entrepreneurship and foreign investment, tend also to be the most actively inclusive.

Richard Branson, founder of Virgin Group, sums up the current view for LGB&T rights from the multinational corporate boardroom: “The promoters of hateful laws often hide behind ‘cultural differences’ and complain that we are trying to impose our Western values. They can’t do that anymore. We’ve moved the argument on. It’s no longer just about values – it’s about good business sense and good economic policy.” 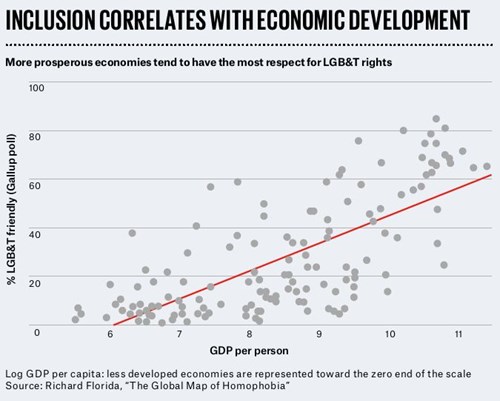 Economist Richard Florida, in his article “The Global Map of Homophobia,” notes a positive correlation between economic development and the degree of LGB&T acceptance (the red trend line above). In a separate study, Kees Waaldijk, Professor of Comparative Sexual Orientation Law at Leiden University in The Netherlands, found that on average, one additional right for LGB&T people is associated with $1,400 more in per capita GDP 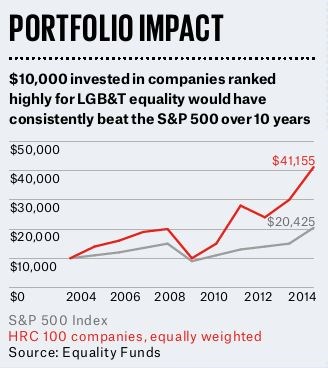 In its Corporate Equality Index, the Human Rights Campaign (HRC) rates companies according to workplace policies that support LGB&T fairness. In 2014, HRC awarded 304 publicly traded US companies its top score of 100 percent. Comparing those companies with the S&P 500 Index over a similar period shows a strong correlation between share price performance and LGB&T inclusion

In the Open For Business report, the case for LGB&T inclusion is made on three levels: Economic Performance, Business Performance and Individual Performance. These are divided into 23 Propositions:

They have also found that positive attitudes toward gay and lesbian people are associated with a wide range of other indicators of a region’s economic and social progress, including the level of entrepreneurship, overall well-being, life satisfaction, human development and urbanization.

Of course, these are correlations and do not prove causation. Yet it seems clear from multiple studies that development and inclusion go hand-in-hand.

Propositions 1 to 9
Open For Business proposes that on an economic level...

3.  Corruption ...discrimination often goes hand-in-hand with corrupt practices and a lack of openness

6.  Brain drain ...discrimination results in a “brain drain,” the emigration of talented and skilled individuals

8.  National reputation ...discrimination can shape perceptions on a world stage, with a negative impact on tourism, attracting talent and developing export markets

Some 89 percent of Fortune 500 businesses have explicit policies against discrimination based on sexual orientation. Of the 20 biggest companies in the US, 14 earned the highest score in the Human Rights Campaign’s Corporate Equality Index (CEI), which rates workplaces based on LGB&T equality.

LGB&T inclusion is also strongly correlated to performance in capital markets: over a 10-year period, data shows shares of companies who score 100 percent on the CEI strongly outperform the S&P 500 Index.

The link between business performance and LGB&T inclusion holds true across the business world in sectors as diverse as law, banking, manufacturing, mining, transportation and energy.

Propositions 10 to 15
Open For Business proposes that businesses that are more diverse and inclusive...

10.  Attracting talent ...are better able to compete for talented employees

11.  Retaining talent ...have higher rates of retention of talented employees

12.  Innovation ...have higher levels of innovation and creativity

13.  Collaboration ...create an atmosphere of trust and communication, which is essential to effective teamwork

14.  Customer orientation ...are better able to anticipate customer needs and to access a broader client base

Evidence suggests that individuals working in open, diverse and inclusive environments tend to perform better. Most strikingly, a culture of inclusion and diversity can boost individual performance for everyone, not just LGB&T employees.

The crucial link between individual performance and LGB&T inclusion is employee engagement – the Holy Grail for today’s business leadership. Creating a culture where employees feel motivated and confident is increasingly a key strategic issue in the boardroom.

An open embrace of LGB&T individuals sends a clear signal to all employees that they are accepted and valued, that they are free to be themselves and that their contribution is welcome. A business that manages diversity well is likely good at managing people overall.

Evidence suggests that people working in open and inclusive environments are more productive, resilient, innovative and likely to go the extra mile to contribute to the life of the company. As Apple CEO Tim Cook writes, “when people feel valued for who they are, they have the comfort and confidence to do the best work of their lives.”

Propositions 16 to 23
Open For Business proposes that individuals in open, diverse, inclusive environments...

16.  Authenticity ...are able to be themselves, instead of concealing important aspects of their identity

17.  Motivation ...have higher levels of motivation

18.  Affinity ...have greater affinity with the values and culture of the workplace

19.  Satisfaction ...have higher levels of satisfaction

20.  Health ...are free from discrimination that can cause poor mental health and physical violence

21.  Speaking up ...are more likely to speak up with suggestions to improve performance

22.  The extra mile ...are more likely to go beyond their formal remit and make a contribution to the culture of the company

CITIES AND THE CREATIVE CLASS

It is no coincidence that the most creative cities – such as San Francisco, New York, São Paolo, London and Berlin – all have vibrant LGB&T communities. Urban economic growth requires the right mix of professions and skills – particularly the so-called “creative class” of scientists, technologists, architects and lawyers, as well as people in design, education and the arts. Members of this group are attracted to cities where they are able to integrate easily and to flourish – and LGB&T inclusion sends a strong signal that a city is open and diverse. In turn, they become agents of economic growth, fostering innovation.

SUPPORT FOR INCLUSION: CONSUMERS ARE READY TO ACT

Open For Business commissioned a survey exploring the attitudes of the general public toward companies doing business in countries with anti-LGB&T laws. The results, published in the Open For Business report, show popular support for global LGB&T inclusion. In addition to the responses shown left, more than half of the respondents (51 percent) indicated they would be unlikely to take a holiday in a country with anti-gay laws 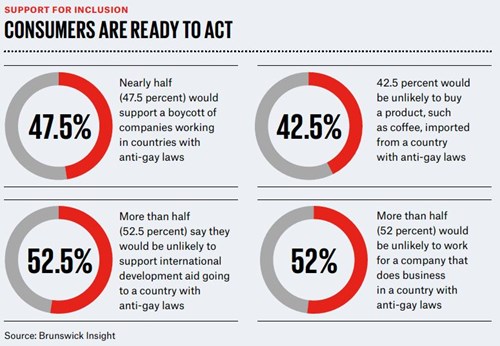 THE REPORT is the most comprehensive collection of evidence yet published on the economic and business case for global LGB&T rights, and shows that inclusion improves performance for individuals, for companies, and for economies www.open-for-business.org

Lucy Parker and Jon Miller are co­authors of the report, “Open For Business: the economic and business case for global LGB&T inclusion.” They are Partners in Brunswick’s London office, where they lead the firm’s Business & Society practice.

Turning a Page on Tech