An exhibit showcasing David Bowie’s legacy is coming to Brooklyn. Rob Bound, Culture Editor at Monocle, offers an inside view

“David Bowie is,” the hit exhibition about the artist, has followed the man’s trajectory: London, Berlin, New York. For the last 20 years of his life, his home was Manhattan, where he was the family man, heading out in disguise to galleries and gigs, getting a light from sidewalk smokers who carelessly offered a Zippo or a match before missing a beat to wonder about that guy’s unmatched, lupine eyes, that sing-song south London baritone. But then it was too late; the night-time ninja was gone, slipped around the corner. And then? And then, sadly, it would always be too late. Reports of Bowie spottings in New York were common; encountering him yourself was a once in a lifetime affair. Many people said it was like meeting a character from a movie in real life. This exhibition, coming to the Brooklyn Museum for its final encore after playing to adoring crowds in London and Berlin, translates some of that myth, some of that aura, and yet also shines a spotlight on his process and preoccupations. It is a testament to the strength of the work of the man himself and the skill of the curators who have put this world tour of an exhibition together.

While the core of the show stays the same, each of the exhibition’s international iterations have seen new work unveiled – or rather, old work presented afresh – and the Brooklyn Museum leg of the Bowie journey has some tantalizing secrets up its sleeve. Visitors can marvel again at the well-known stuff such as Bowie’s early ’70s Ziggy Stardust creation and DA Pennebaker’s untouchably strange and intimate footage of that final Ziggy concert at the Hammersmith Odeon. But they can also ogle the drawings and concepts for Bowie’s final album, “Blackstar,” and specific American and New York material that has not turned up or been displayed before. Anne Pasternak, director of the Brooklyn Museum, is jubilant at being custodian of the show’s victory lap.

“When Bowie gave his blessing for the exhibition to the Victoria & Albert Museum back in 2013, he was very clear in his desire to have the final venue be here in New York,” she says. “He designated about 40 objects to be added to the exhibition for New York. And here we are!”

Left - Designed by Freddie Burretti, this quilted two-piece suit was made in 1972 for the "Ziggy Stardust" tour.

Right - Bowie's left eye was injured in a fistfight in 1962, leaving the pupil permanently dilated and more prone to "red-eye" from the camera flash. This photo is from the shoot for the cover of the 1973 album "Aladdin Sane".

Now, please don’t shoot the messenger of the obvious, but music is fairly central to this whole enterprise and the highly regarded German headphone specialist Sennheiser has again engineered the audio reproduction that sings through the show. In addition, a new sponsor for the exhibit in its Brooklyn Museum incarnation is Spotify. The streaming service has its eyes firmly on the future and has come on board to do much more than simply write a check.

“While Spotify is making a significant contribution to help us meet costs, they are also leveraging their significant marketing knowledge and data on David Bowie listeners to maximize awareness of the show,” says Pasternak. “In this sense they are also a collaborator. Being able to play both roles makes them a perfect partner.”

While investment banks and consultancy firms often lend their wedge to the shows, their guest lists to the opening nights, and can bask in the reflected glow of cultural exchange, Spotify offers additional expertise in the statistical and practical aspects of streaming the past, present and future of music. Even for old pros like the Brooklyn Museum, the involvement of Spotify feels optimistic and fresh. Museum visitors can augment their experience of the show by streaming any song or album by Bowie via Spotify before they even think of heading home – a near-perfect example of what businesses term convergence. When it comes to adding value to an offering, acting as a partner rather than a sponsor, it’s a very decent hand of cards to hold. 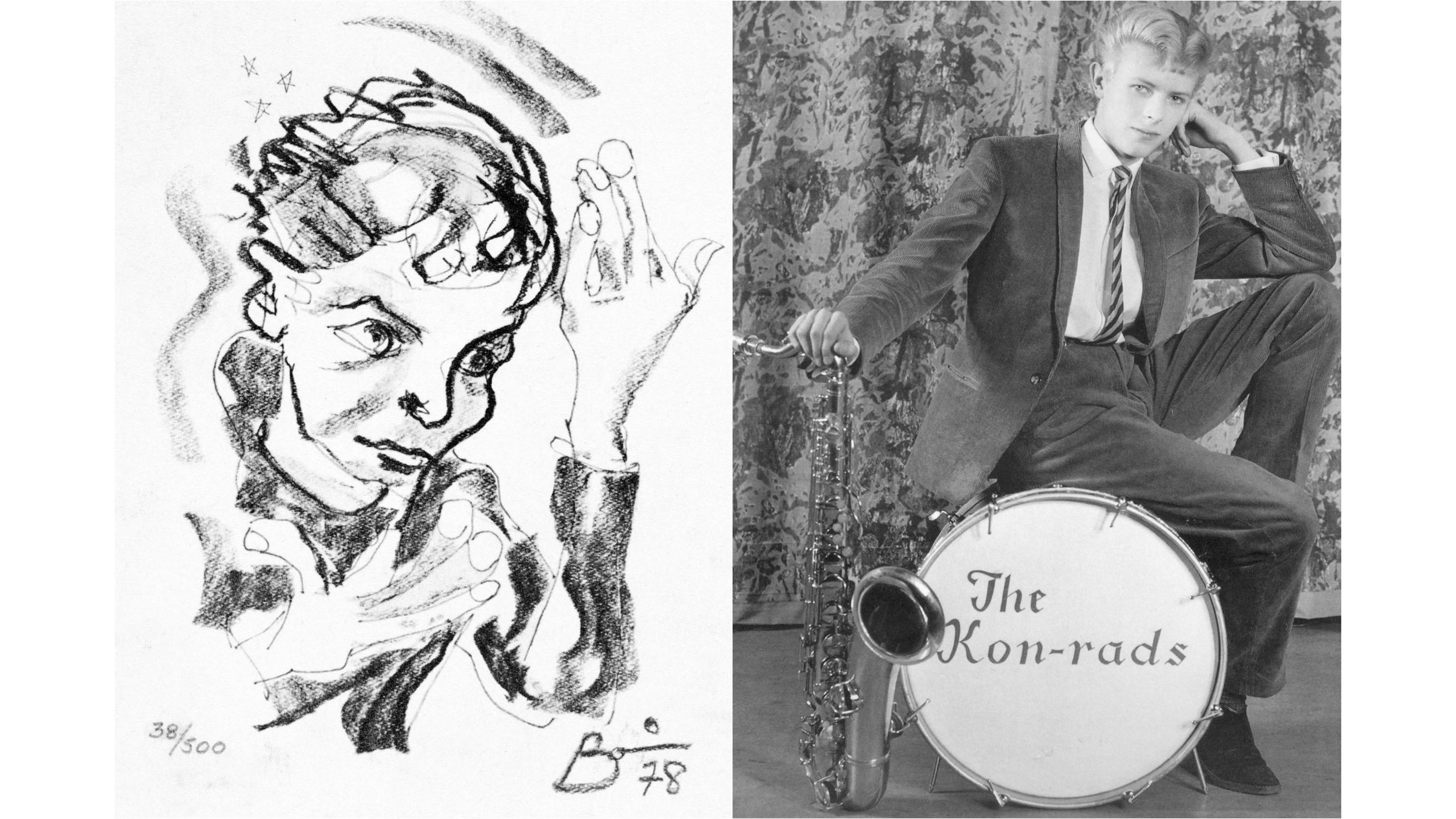 Left - A 1978 self portrait based on the photo from his "Heroes" album cover.

Right - A young Bowie poses for a 1963 publicity photo for his band, the Kon-rads.

“In the past, museums would advertise on public radio stations and hope for an audience overlap,” says Pasternak. But the insight Spotify provides allows for far more precision. “Here, we are easily able to see what other artists Bowie listeners follow and target their fans too.”

This strategy seems to have also energized the Brooklyn Museum’s dreams for the future. “I’m eager to see how we can work with Spotify going forward on the marketing of other types of exhibitions, like our upcoming ‘Soul of a Nation’ show. The possibilities are exciting,” says Pasternak.

For sure, they are – it’s not often that the notion of “accessibility” is so deeply entwined with the exhibit itself, and leaps out as something genuinely inclusive and inspiring.

If you visited the Victoria & Albert Museum’s “David Bowie is” in London in 2013 or have followed the exhibit around the world, the final hit of the tour at the Brooklyn Museum will be essential viewing.

The London show focused on the general sweep of Bowie’s career while dipping its toes into some of the white-hot lava of his creative flow. The Berlin leg showed his catharsis in trying to live drug-free in a physically and politically divided city. Brooklyn will reveal a late-period New York bloom in Bowie and something altogether unfamiliar to those that loved the alien: the legend in the everyday; a happy David Bowie in his de facto hometown.

Best of all? Perhaps still the title itself – for many, Bowie is an eternal present.

A Seat at the Bloomsbury Group's Dinner Table

The Charleston Trust preserves an iconic farmhouse in southern England—and, as important, it looks to continue the kinds of discussions that took place there between great artists and thinkers. Brunswick speaks with its Executive Director and CEO.