She started playing piano at 3 years old and was a star conductor at 19. But it wasn’t until she was almost 30 that Xian Zhang felt music might be “something serious.”

“I didn’t really feel like it was something that I had to decide,” she says.

Now an international orchestra leader, she sees her history as almost predestined. Her parents were her first teachers; she learned quickly, on a piano her father had assembled out of spare parts.

At 11, she left home in Dandong, China to study music at an elite boarding school associated with the Central Conservatory of Music in Beijing. In 1992, at the age of 19, she found herself in the limelight when, at the last minute, her teacher asked her to lead a production of Mozart’s “The Marriage of Figaro” at the China National Opera. Ms. Zhang calls the moment “my surprising debut” – as much a surprise to herself, it seems, as to the orchestra and audience. But success followed her over the next decade and, in 2005, New York Philharmonic Director Lorin Maazel appointed her Associate Conductor of the world-leading ensemble. If her destiny seemed prescribed before, at that point it became inescapable.

“I would have loved to be an architect,” she says. “But that would have been impossible because I left home at such a young age to pursue music.”

Yet being locked into her profession early seems to have only inflamed a passion for music that has guided her since childhood. Today, she maintains a demanding schedule of professional engagements that has her traveling between Europe and the US many times a year, along with regular return trips to China.

In 2016, Ms. Zhang took over as Music Director of the New Jersey Symphony Orchestra, the first woman in the group’s 96-year history. She is also Principal Guest Conductor of the BBC National Orchestra & Chorus of Wales and will lead the ensemble on an international tour of China in the 2018-19 season. And she still visits Italy to lead her old group, the Orchestra Sinfonica di Milano Giuseppe Verdi.

She lives in New Jersey with her husband Lei Yang, a writer, and their two boys, balancing time between family, the NJSO and international engagements.

In concert, a conductor becomes the embodiment of each piece. She must be fully aware of every marking on the score, must know each individual part as well as the musicians themselves, and the whole as well as the composer. That means long hours of detailed preparation for rehearsals and concerts.

Musical interpretation is a delicate, complex affair, nuanced almost beyond belief. A thousand details go by in each measure. The conductor must always be conscious of the overall structure and thinking several bars ahead, to lead the musicians effectively toward a common goal. The musicians themselves are each tugging at that interpretation, listening to their fellows and participating in her vision but also fulfilling their own. The result is a living sound, a creation that yields surprises with each new performance.

“Every concert is different,” Ms. Zhang says. “That’s part of the amazing thing about doing live performances. There is this part that you cannot predict.” 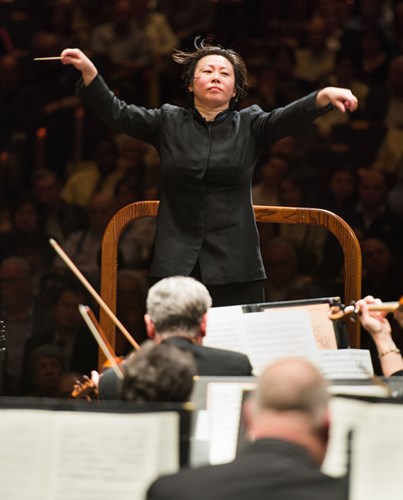 How did you decide to become a conductor?

That was by accident, really. [Laughs] I was always a pianist. But at the conservatory, my piano teacher didn’t like the size of my hands. He thought I wouldn’t be able to develop the power that I needed. At the same time, I had a conducting teacher who was a lady, so I became a conducting major.

In my life, over and over I was somehow pushed to pursue this career. I guess that’s what you would call a “calling.” I didn’t feel that was something I was doing myself. It almost felt like something external or some higher force that was guiding me.

But it’s not so unusual. Many conductors I know were put into this position where we had to lead. Even the very famous conductors – von Karajan to Toscanini. Many people were pushed into this by accident. That’s your luck or your fortune that strikes and it just happens.

Is there a conductor who influenced your style?

I really, really love Carlos Kleiber, the German conductor. Studying and just starting out, watching him was like watching a god. There’s a video of him doing Beethoven’s Symphony No. 4 that was really inspiring. Every time I watch it, still, I realize new things that he’s doing that are fantastic. It’s unbelievable, the level of artistry.

What do you think separates a good conductor from a great one?

The conductor is the architect of the world of the piece, whatever piece it is. The conductor needs to shape it. To plan and design it with the things that you can learn or imagine from looking at the score. Especially when it’s a new piece, a premiere, it’s like building something almost out of thin air. We build it out of the pages of the score.

With gestures, you should let the music lead you. I’m not one of those conductors who practices with a mirror.

Do your conducting gestures come naturally or is that something you had to work on?

With gestures, you should let the music lead you. I’m not one of those conductors who practices with a mirror. I did that to learn the basics, when I was 17 or 18, when I first started. The teacher would say, “Look in a mirror and look what are doing with your head! Don’t do this and try that.” But since then, I try not to think about it. You just know how to communicate with the orchestra. Sometimes, in certain difficult passages, I’ll think of a technical solution that I need to do to make it clear and to make it work.

Reviewers, myself included, often comment on the physical energy you display when you conduct. I sometimes have the illusion you could fly off the podium like a superhero.

[Laughs] That’s not me, that’s the music. At least I feel that’s the music propelling me to do that. When I see a score, I imagine the sound – there are times, if I don’t think the orchestra is giving me enough, when I might give a little more to get the sound I expect. But mostly it’s the music itself.

You were the first woman to hold a titled role at a BBC orchestra and the first to be Music Director of the New Jersey Symphony Orchestra. Why do you think there are so few women conductors? There are plenty of women in classical music.

But not in the old days! It took some time for these women musicians to establish careers, to start to be famous. It’s the same with conductors, we just need more time for them to emerge.

You don’t decide to be a conductor when you’re 3 years old. And it takes years of training to become a good one. If a class of students has only one or two girls, the chance that they’ll succeed will be even less. So we need to foster that.

I believe I’m doing that myself, in coaching and mentoring. There are some women I’ve met over the years and I’ve tried to help them and advise them. It’s just a matter of time. Give us another 10 years, you’ll see. In the last five years it’s changed quite a lot.

Xian Zhang acknowledges the audience applause with the New Jersey Symphony Orchestra. The conductor also regularly appears with groups in the UK, Italy and China.

How do you cope with all the traveling?

Human beings are really designed to stay in one place. [Laughs] I have to be careful to balance the rest I need around work. It’s physically demanding. I came back from China not quite a week ago. I’m barely adjusted from jet lag – a 12-hour time difference – and I’m leaving for Italy in two days – again, a six-hour difference. That can make you not function as well as you would normally.

Do you have to prepare your scores on the plane?

I prepare scores everywhere. On the plane, in the lounge, the airport, the hotel room, anywhere. And I can sleep anywhere, just sitting somewhere.

As long as you give me a light, I can study – with a phone or an iPad, you don’t even need a light. You just open the PDF and there it is. It’s a matter of concentration and pressure. If you really have to get it done, you will get it done. There’s no other way out.

Musicians who are serious about their work, we set a very high standard for ourselves. We’re self-critical. It’s tough. We’re hard on ourselves. But many times we are successful because of that, because we nag ourselves really hard.

What does a typical day look like for you?

If I’m with my family in New Jersey, I’m up around 3:30 or 4 a.m. – that’s normal. I do my work very early. Then the family wakes up and I’m back to reality and have breakfast and then head to rehearsal.

When I’m traveling, I have a set of timetables according to the country I am in. Let’s say I’m going to Italy tomorrow and I land there in the morning. I’ll ask the orchestra to schedule rehearsal for the afternoon or evening so I can sleep in the morning when in America it’s still night.

In China, if I get there in the afternoon, I would be just dead. That’s after midnight in the US. So I go to bed immediately and wake up in the middle of the night there. But then I have hours to study before breakfast. Then I go to rehearsal until around 3:30. Then I go back to the hotel and sleep again and then midnight, I wake up. It sounds crazy, but it works!

It seems like there’s a kind of fever for classical music in China, where in the West, ensembles are often struggling to keep audiences.

In China, classical music is considered elite or chic. In America it’s considered uncool. Of course, we try to make it cool, we try to imagine ways to attract younger audiences. But you can’t fight the overall thinking. In Asia, it’s a sign of the family-values culture and a hallmark of a good education. That opens a big door for us to attract more of an audience.

I was in Hangzhou in March with the cellist Jian Wang doing the Schumann Cello Concerto – a good piece, but not a hugely popular one. There must have been 500 kids, maybe 10 years old, with their parents. After the concert, they all lined up to meet us. We had to sign programs and take photos for like an hour.

They crave classical music because the economy is growing quickly and people feel like they have enough money to do something else that will benefit their children. We don’t see that happen very often outside Asia. Either we’re not doing enough, or the parents are not considering us as an option. They will go to sports more often than going to a concert. In China, parents will take their children to concerts every night, but to play soccer maybe once a month.

As a young musician, I felt like I was fighting against a basketball culture. I don’t think I’ve ever been to a professional basketball game. Ever.

Carlton Wilkinson is Managing Editor of the Brunswick Review, based in New York. He holds a Ph.D. in music and is a culture writer in New Jersey specializing in classical music.