Union Pacific is the exception. The Omaha-based railroad, the largest in the US by revenue ($19.9 billion in 2016), was formed when President Abraham Lincoln signed the Pacific Railroad Act into law in 1862. Its mission – uniting the East Coast and the West Coast through the first transcontinental railroad – changed American history. Towns that were on its path thrived; many that were bypassed died.

The company’s rails carried not just lumber, wheat and tools, but modernity itself. When Union Pacific was founded, the time of day varied in the many communities on its tracks. It was usually noon when the big clock on the town square said noon, regardless of what the big clock said in the next town over. Unable to coordinate arrivals, departures and employee schedules, the company led a coalition to standardize time throughout the country. In 1883, the railroads developed their own time zones, and Congress finally followed suit in 1918 by passing the Standard Time Act officially adopting their system.

The story of Union Pacific is not all glorious – no more than the history of America itself – but it is pervasive in any account of the post-Civil War era. Many of the earliest national parks, including Yellowstone, Zion and Bryce, had their legendary rustic lodges built by Union Pacific to encourage a new generation of middle-class domestic travelers. 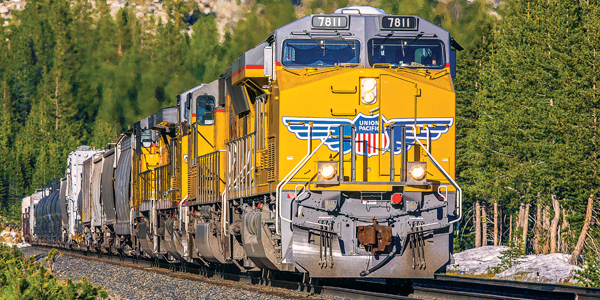 A.J. Russell took this famous image, of the 1869 “Golden Spike” ceremony at  Promontory Summit, Utah, marking the completion of the first railroad to span the US.

So what does a company do with such a legacy? Union Pacific celebrates it. To its 42,000 employees, the company’s rich history is a source of pride, identity and inspiration. To walk through the halls of its airy, modern headquarters in Omaha is to imbibe railroad culture. Many employee offices are filled with vintage posters, model trains, beautiful coffee-table volumes or serious histories about the industry. Color photographs of trains forging through scenic desert and mountain landscapes line the walls. The company store in the lobby sells Steam Engine 4014 belt buckles, “heritage playing cards,” and a 200-piece puzzle derived from the famous A.J. Russell image of the celebration following the driving of the last spike at Promontory Summit, Utah, May 10, 1869 to complete the first transcontinental railroad.

One of the company’s many in-house historians is Scott D. Moore, the senior vice-president for Corporate Relations. Having previously served as Nebraska’s elected secretary of state, and before that as a state senator, he now oversees the company’s public affairs, communications and branding efforts. He has logged many hours speaking face-to-face with friends and foes who live alongside the company’s network in 23 western states.

He has assigned people who work for him to read The Octopus, a canonical and critical 1901 novel that describes tensions between farmers and the railroads – a work that nobody would mistake for corporate PR. “I think we have to understand the history of the company to represent the company today,” says Moore. “We have been through a journey together with many of these communities. When one of us walks into a room, it is Union Pacific walking into that room, and that has meaning.”

Many Union Pacific employees have parents, grandparents and in some cases great-grandparents who worked there, and they feel an unusually close personal connection to the company. Kevin Durant is a seventh-generation Union Pacific employee – and a descendant of the legendary and controversial company founder Thomas C. Durant. He has a four-hour presentation that he often presents to incoming employees. “Even the newest employees here have the railroad pride,” says Durant, who departed Union Pacific earlier this year. 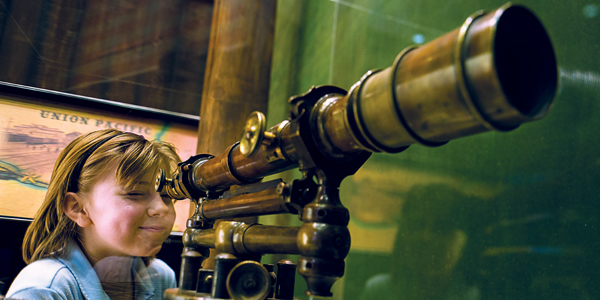 A young visitor examines an artifact in the Union Pacific Museum in Omaha. Children’s tours are often guided by retired employees.

About a 30-minute drive from headquarters, in a Beaux Arts building next to the town square in Council Bluffs, Iowa, is the Union Pacific Railroad Museum. Founded in 2003, it is a public-private partnership, with the city leasing the building to the company and the company paying for operating expenses. Exhibits document the hard life of Chinese workers breaking through the Sierra Nevada mountains, the Art Deco elegance of early 20th century luxury train travel, and the mixed glamour and hardship of law enforcers whose
lives were the stuff of Hollywood Westerns. School children visit regularly, guided by retired employees, and exhibits frequently travel to national parks or historical societies in other states. Deep archives contain corporate documents, historic films and an extraordinary collection of more than 500,000 photographs, many of which record the story of the American West. The museum is now going through the considerable expense of digitizing them.

“The collection is really a history of the development of photography in America,” says Patricia Labounty, the museum’s collection manager.

The collection ranges from daguerreotypes to color photos and, along with the museum’s other artifacts, traces a history that intertwines with and helps shape the evolution of the entire country.

Brunswick Insight’s poll of employees reveals how they would like their companies to respond. By Mara Riemer.