To have and have not

Inequality is rising to dangerous levels. Brunswick’s Jon Miller looks at the ways business may be complicit in this trend and what, if anything, can be done to reverse it

The dramatic and worsening disparity in the distribution of the world’s wealth has become too big for Big Business to ignore. Oxfam recently estimated that the world’s eight richest individuals had the same wealth as 3.6 billion people – the bottom half of the pyramid. Only six years earlier, it had taken 388 individuals to equal half the world’s wealth.

True, some statistics are showing that inequality is actually falling. One key measure of the global economy is inequality between countries. This has, indeed, been falling steadily for the past 30 years as international trade benefits the economies of poor and developing countries. That’s the good news.

Another interpretation suggests that global income inequality has been on a long-term downward trajectory for a century or more. But this amounts to a statistical sleight of hand: as the world population grows, the crowd around the lowest end of the economic ladder is growing, increasing an “equality” that in this case means “equally low incomes.” Meanwhile, the incomes of the few at the top of the ladder soar ever higher.

What is clear is that a vast amount of the world’s wealth is now controlled by a small minority, while billions watch their economic prospects deteriorate – a gap that, as it continues to widen, threatens to destabilize societies and governments.

Business leaders aren’t blind to the problem. Many we speak with are struggling to answer two important questions: How is business complicit in this trend? What, if anything, can be done to reverse it?

Productivity in advanced economies has been steadily increasing since World War II – but for the past 30 years, real wages haven’t kept pace. In the US, as productivity rose by 74 percent between 1973 and 2013, hourly compensation grew a meager 9 percent. As corporate profits continue to rise, wages remain relatively stagnant and record numbers of people in full-time jobs have been forced into poverty, forming an emerging class of working poor.

Technology and globalization are widely seen as two macro trends contributing to this schism: the job market is being “hollowed out” by technological changes that partly or fully automate once-reliable mid-range skill jobs. At the same time, increased access to global markets means many jobs have moved to developing economies.

Several other factors are also at play. The increased “financialization” of the economy, encouraged by banks and monetary policies, has moved wealth away from manufacturing and agriculture. The declining influence of organized labor has allowed competitive pressures to result in lower wages, even as executive pay levels have grown exponentially.

No one is suggesting we strive for perfect equality, which in itself could be damaging to economic growth. But the problem we currently face, too much inequality, breeds clear social and economic ills that will only get worse.

Studies by the Paris-based Organisation of Economic Cooperation and Development show that inequality has a negative effect on medium-term growth, reducing demand and suppressing entrepreneurial activity. Rising health concerns of the working poor also hurt productivity and increase the amount of public spending required to care for them.

Inequality also acts as a multiplier for a range of societal issues, exacerbating tensions between ethnic and cultural groups and fueling fanaticism. Perhaps most worryingly, growing wealth disparities are calling into question the legitimacy of Western-style economic and political systems. That may help to explain how in the world’s democratic heartlands – Australia, Sweden, US and UK, among others – public support for democracy is wavering. In free elections over the past decade, we have seen a surge of voters choosing authoritarian, populist platforms – many of these carry an explicitly anti-Big Business agenda.

“Too much … has gone to too few,” declared Goldman Sachs CEO Lloyd Blankfein in 2014 – he is among a small but growing number of CEOs who have suggested that business is in the best position to help provide a solution. Meanwhile, certain tendencies in corporate behavior over the last 30 years are feeding a public perception of Big Business as part of the problem. Specifically:
Executive pay The increasing pay gap between CEOs and workers fuels a sense of unfairness. As a candidate, Donald Trump made the problem a plank in his platform: “It’s disgraceful … you see these guys [CEOs] making enormous amounts of money. It’s a total and complete joke.”
Stock buybacks Executive compensation is largely stock-based and the repurchase of shares drives stock prices higher in the short term. Many see the growing popularity of buybacks as a way that executives and elite investors enrich themselves at the expense of their companies and workers.
Corporate tax Despite rising profits, many multinationals are paying less in taxes. Critics complain that the world’s best legal minds are focused on corporate tax efficiency, while national treasury officials struggle with limited resources and jurisdiction constraints.
Hoarding cash Since 2000, corporate saving rates have accelerated sharply in all G7 countries except France and Italy. The Financial Times reported that in the US, five tech companies were holding more than half a trillion dollars between them – idle cash that’s not aiding the real economy.
Pricing Rising prices for products and services deemed in some way a “public good” – in particular, healthcare, pharmaceuticals, education and utilities – have caused much public anger. News of increases in company profits or big executive packages rubs salt into the wound.

What can business leaders do?

Almost all companies can help tackle  inequality in at least one area: skills. A number of advanced economies today are suffering from a shortage of skilled workers – a trend the McKinsey Global Institute has projected will even hit developing economies in the coming decades. Today, businesses can help through programs and initiatives that train and re-skill workers.

There is also the question of whether businesses should weigh in publicly on inequality and the contentious issues that surround it. Staying silent may avoid controversy, but bears risks of its own. Consumers and employees increasingly want to know where a company stands on social issues – and silence can speak loudly.

As they join the public debate about inequality, corporations should not lose sight of the enormous progress that the world’s economy has made. In 1990, nearly half of the population in the developing world lived on less than $1.25 a day; that figure has dropped to 14 percent in 2015, according to the United Nations.

Globally, the number of people belonging to the middle class (living on more than $4 a day) has almost tripled since 1990. A range of other indicators shows meaningful progress in global health and education. Those are significant achievements, though much more remains to be done. Look behind the scenes of these advances and you will find businesses are there, playing an important – and often, catalyzing – role.

Yet, with growing volume, the world is asking of Big Business: are you creating value for society as a whole, or just for the few?

For many, the answer remains the latter – business leaders are seen to be enriching themselves and shareholders at the expense of broader society. Now, more than ever, companies need to put forward a confident account of how they’re creating social value alongside financial value, and demonstrate their commitment to doing business in a way that leaves no one behind.

Jon Miller is a Partner in Brunswick’s global Business & Society Practice. He is the co-author, with Lucy Parker, of Everybody’s Business: the Unlikely Story of How Big Business Can Fix The World.

The map shows the density of inequality news coverage in 2016 – the darker the color, the higher the estimated rate of media mentions in each country

Research by Brunswick found that from 2015 to 2016, there was almost a 10 percent increase in the total volume of news articles and online reports mentioning inequality. Countries with the highest total number of articles were the US, Spain, China, Brazil and Mexico 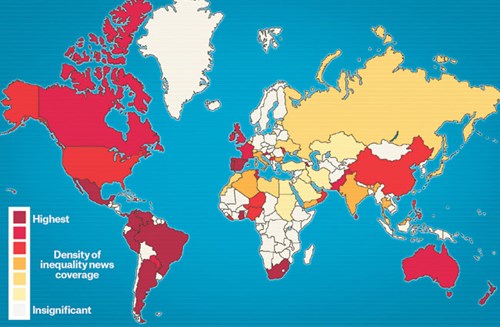 A worrying trend is emerging in the UK: record percentages of people in full-time jobs are now classified as living in poverty. This “working poor” class is growing in size in many European countries, as well as the US 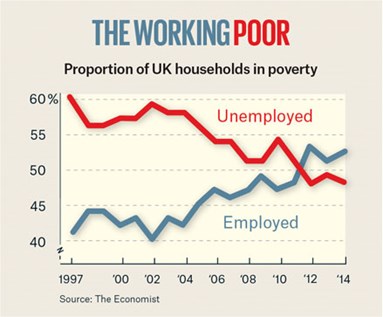 While overall real wages in the US have largely been stagnant since the 1970s, CEO salaries at large US companies have skyrocketed, fueling a sense of frustration and injustice 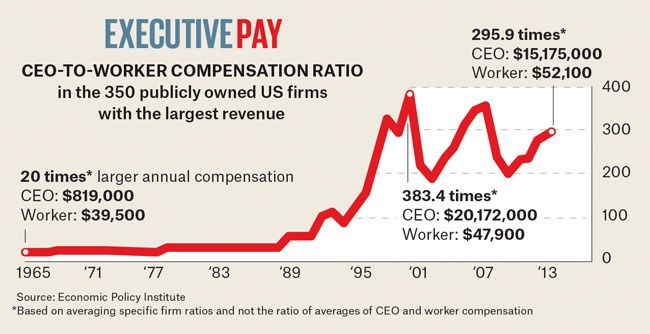 Between 1997 and 2015, the average wage increase was dwarfed by the pace at which dividends grew. In Germany, where this chasm is especially pronounced, average dividends increased by more than 400 percent; wages climbed by only 26 percent 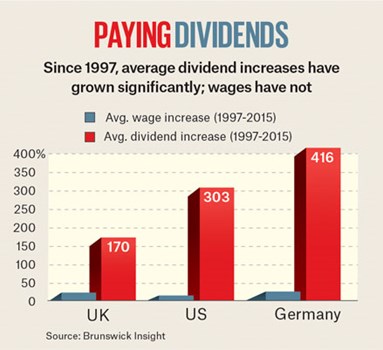 Stock buybacks have risen sharply since 2014. They reward shareholders and executives, but critics argue they exacerbate inequality, and come at the expense of long-term investments in business and worker compensation 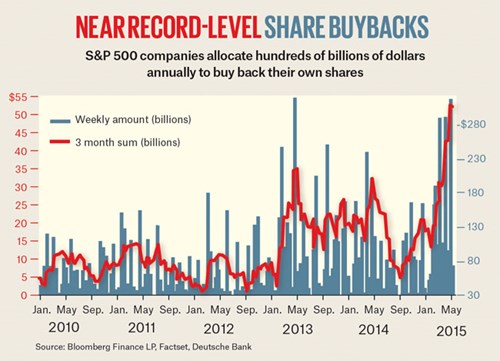