The CEO, The Bees, and His Scooter | Brunswick
Perspectives

The CEO, The Bees, and His Scooter

A Brunswick Insight survey shows that people around the world place greater hope in business than in government. That doesn’t surprise Arnaud Poupart-Lafarge, Chief Executive Officer of Nexans, one of the world’s largest power, telecom and fiber-optic cable manufacturers.

“There is not enough motion in public life,” he says at the start of a conversation in his office at Nexans headquarters in Paris on a sunny spring afternoon. Government work has become less glamorous and rewarding, and the brightest minds have been drawn to careers in the private sector. Bureaucratic systems allow for little change and innovation. And as the keenest talents gravitate to the private sector, societal expectations turn there as well.

On paper, Poupart-Lafarge’s profile conjures images of l’ancien régime. A former executive with ArcelorMittal, he took the helm at Nexans in 2014, having previously served as COO. Under his tenure, the company has gone from an operating loss to a healthy profit, with its stock price rising 20 percent over two years.

Standing well over six feet tall, he might be mistaken for a tough, old-school businessman. But Poupart-Lafarge represents a new breed of leader, priding himself on his conscientious and hands-on approach to management. A thoughtful soul who keeps bees in order to do his part to protect the environment. Poupart-Lafarge says he doesn’t want to be “the CEO who doesn’t know what’s going on,” but the one who connects with employees all the way to those working the factory floors, whom he regularly visits.

Poupart-Lafarge strongly believes that the influence of business has overtaken that of governments because of its superior ability to attract talent and provide solutions to societal problems.

Leaving business school, aspiring managers need to know all aspects of business, from the lowest levels, Poupart-Lafarge says. As a graduate of Stanford’s Economics program, he made a deliberate choice to “start at the bottom.” He still feels its necessary to keep in close contact with workers at all levels.

Business now touches most aspects of society and daily experience, with brands more influential now than at any other time in history.

However, with great power comes great responsibility, he adds, pointing out that as the reach of business has expanded, so too has the gap between business leaders and society.

Poupart-Lafarge cites the growing divide – financial and cultural – between many executives and their employees. If instead they kept “a sense of being closer to their employees, they would be closer to reality.”

This distance between employees and their top bosses is further compounded by shortcuts into management. Poupart-Lafarge traces this lost link to a too-rapid jump from business school into management. “They rise quickly up the ranks in just three steps when it should be taking 12 steps.” Graduating from Stanford with a Master’s of Science in Economics, Poupart-Lafarge chose “not to do any shortcuts, going all the way from the factories to the headquarters.” 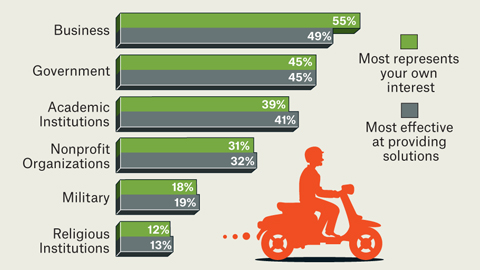 Brunswick Insight’s “Perspectives” survey, which polled more than 42,000 people, found that respondents expect business, more than any other institution, to solve society’s ills. That underscores the pressure on corporations to make decisions for the benefit all stakeholders.

Arnaud Poupart-Lafarge believes that it is important for business leaders, including himself, to “do good and to fulfill that societal agreement.” This includes corporate social responsibility initiatives, where companies acknowledge and address issues that their businesses directly affect – like the environment. At the center of Nexans’ CSR policies are four priorities which are extensions of Poupart-Lafarge’s own beliefs: employees, ethics, customers, and the environment. He believes that companies must address social issues in partnership with NGOs and local communities to affect change at the local level.

Taking care of employees (and by extension society) includes preparing them for technological changes that will have major impacts on their way of life. Courageous leaders must be frank and honest in delivering the message about the world’s direction.

Now, Poupart-Lafarge and many of his peers believe that technological advancements and automation could create even greater disruption than globalization, leading to increased productivity but also increased unemployment and wealth displacement. He fears that the public is not aware of the extent of the negative potential. If not managed correctly, technology and automation have the potential to destroy – or at least drastically transform – the service and manufacturing industries.

Arnaud Poupart-Lafarge, CEO of Nexans, was hired in 2013 as its Chief Operating Officer. Previously, he was Executive Vice President of ArcelorMittal, a steel and mining company.

Nexans is a Paris-based global cable maker for the energy and telecom sectors, with nearly 26,000 workers. In 2013, Nexans formed a foundation to develop energy for disadvantaged communities worldwide.

Zaina Jabur, MD, MPH, is a graduate student at the Imperial College Business School. She interviewed Poupart-Lafarge at the invitation of Brunswick Group as part of our “Tomorrow’s Leaders” program.

From a depth of experience that dates back to the hardscrabble 1940s, this prestige beauty industry legend surveys the world’s current travails and sees opportunity.

A financial stake in the company isn’t enough; employees need to be co-managers. Corey Rosen, author and founder of the National Center for Employee Ownership, talks to Brunswick’s Carlton Wilkinson.

Chairman of the Board

An interview with Enrique Hernandez Jr., Chairman of McDonald's.