The battle cry of freedom | Brunswick

The battle cry of freedom

Charoen Pokphand group’s Senior Chairman and CEO, father and son, talk to Brunswick’s Will Carnwath about taking on the fight against slave labor

Songkhla Pier in Southern Thailand is a port that never sleeps. In the middle of the night, fishing boats arrive with their catch in large blue plastic barrels. Workers unload fish and ice it to keep it fresh. The men on these boats work hard for long hours. But an investigation found that some of them were not working out of choice: they were slaves, working to survive.

In 2014, The Guardian made a connection between the farmed shrimp produced by the large Thailand-based conglomerate Charoen Pokphand Group and the practice of slave labor on “ghost” ships operating far out in the Gulf of Thailand, often for years at a time without coming to port. When the story broke, the company was shocked, as were its customers, who began canceling orders. The company faced a choice: cut ties with “problematic” suppliers and walk away, or take a stand. It chose the more unusual route of tackling the practice of forced labor in the Asian fishing industry. The first would have been the easier path and might have even satisfied most of its customers. But the horrors of the slave trade were too big to ignore.

“Yes, we wanted to solve our reputation problem,” says Dhanin Chearavanont, CP Group’s Senior Chairman. “But we didn’t want to stop there. We wanted to tackle the problem.”

The problem was modern slavery.

Humans caught in a net

Dhanin Chearavanont was CEO and Chairman of CP Group and steered the company through the crisis of dealing with slave labor on fishing boats feeding into its supply chain. In early 2017, Dhanin promoted his son Suphachai to the CEO position, and elder son, Soopakij, to Chairman. Dhanin himself continues in the role of Senior Chairman.

The company doesn’t own or operate fishing vessels, but independent boats are part of a supply chain that ultimately delivers product to its foods division, CP Foods. Many of the workers on these vessels are undocumented migrants from neighboring Myanmar and Cambodia – easy prey for human traffickers. Rescued individuals report that they were smuggled into the country in search of jobs, but in some cases they were instead treated as captives and sold directly on to fishing boats for as little as $400. Others were charged exorbitant fees for the promise of a well-paid job but forfeit their entire salary, sometimes for years on end, to pay the “debt.”

Once onboard, often miles offshore and in international waters, workers rescued by NGOs reported hauling nets and sorting fish sometimes over 20 hours a day. Trapped at sea – sold from one boat to another, sometimes for years – some even turned to suicide.

One man, who had been a monk in Cambodia before being sold into slavery, was freed by a local charity for roughly $550. He spoke on camera to rescuers: “I thought I was going to die,” he said, in the video. “He [the captain] kept me chained up. He didn’t care if I had any food. He didn’t care about anything. He kept me outside in the wind and rain. All the other fishermen had been sold, like me. We were treated like animals. But we’re human beings.”

“Human trafficking is a global problem,” CP Group CEO Suphachai Chearavanont says. “One company isn’t going to solve that. But what we were seeing was a concentration of human rights abuses in the Gulf of Thailand – that’s a problem that we could try to help solve.”

Thailand is one of the world’s largest shrimp producers, with hundreds of land-based farms producing about 300,000 tons in 2016. This makes the country a huge consumer of shrimp feed. Shrimp need protein. To make the feed, shrimp farmers buy fishmeal made from dried powdered fish, either from the trimmings from the canning of fish, or from “bycatch” – small fish caught alongside high-value species that can’t otherwise be sold.

Historically, it has been almost impossible to know the source and type of fish that has gone into the fishmeal and eventually into the shrimp feed. Journalists from The Guardian, in partnership with the Environmental Justice Foundation (EJF), followed trucks of bycatch from ports and boats where they knew trafficking and indentured labor were an issue, to a fishmeal plant – and from there they followed them to the gates of a shrimp feed mill, one of whose customers was CP Group. 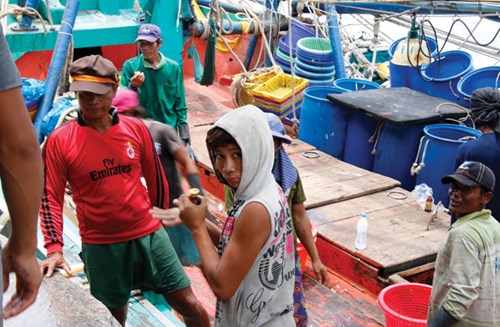 A coalition convened by CP Group has worked to eliminate the practice offorced labor, which was widespread on fishingboats in the Gulf of Thailand. Sold from one boat to another, some workers didn’t return to land for years at a time

The Guardian exposé appeared on June 10, 2014. CP Group was the only business to go on record in the investigation, saying it wanted to do whatever it could to end slavery in its supply chain.

The company found itself in the spotlight. Many western retailers, scarred by previous supply chain scandals, removed CP Group products from shelves. Many suspended orders and made public statements distancing themselves from the issue. “Some of our best customers stopped accepting our deliveries. We were put on hold by some of our biggest clients overnight. We knew we had to address the issue. And quickly,” Dhanin Chearavanont says.

“We could have replaced the fishmeal entirely, with vegetable protein from soybeans. After all, fishmeal makes up only about 10 percent of shrimp feed. But we decided to go another way.”

CP Group was founded in 1921 by the current Senior Chairman’s father with just a single seed shop in Bangkok. Today it has over 300,000 employees and is one of the biggest food producers on the planet, sending its products to around 100 different countries. Over time the company has added telecoms, finance and property to its portfolio. Along the way, it has also developed a commitment to community engagement that made it natural to step in to address forced labor. As Dhanin Chearavanont says, “We seek to generate benefits not only for the company, but for the countries and communities in which we operate.” This “Three Benefits” principle is a longstanding policy, one that still guides the company’s operations.

In its food business especially, CP Group also prides itself on its efficiency and self-reliance, traits that had to be re-examined for this battle.

“We had to adjust some of the typical behaviors that make us successful: a focus on affordability, on our product quality and safety, and a focus on fixing things on our own,” the Senior Chairman says. “Even if we focused all our resources on the problem, on our own we would have failed because so much of it was outside of our ownership or control. To tackle slavery, we needed partners to help at every step of the lengthy and complex supply chain – even our harshest critics.”

When the scandal broke, the EJF, the Sustainable Fisheries Partnership and World Wildlife Fund Thailand all criticized the Thai companies linked to the issue. Now they were invited to help solve the problem, with customers and even competitors.

Costco, one of the largest US customers of the company’s CP Foods division, was one of those that immediately embraced the idea of an industry-wide task force. The wholesale chain was a key partner in broadening what became the Shrimp Sustainable Supply Chain Task Force. Thai Union, Thai Royal, Morrisons, Tesco, numerous ministries of the Thai Government, and fishermen’s associations were among the other key players to join.

The task force developed a strategy labeled “track and trace”: track the fishing vessels; trace all fish from source to factory; and document all workers on fishing boats. Since then, CP Group has completed a physical audit of 100 percent of the vessels, plants and feed mills in its bycatch supply chain. It now works with plants certified by the Responsible Sourcing measure of the International Fishmeal and Fish Oil Organisation, the global gold standard for environmental responsibility, and is helping others reach the same level. A trial project with the Thai Coast Guard and Ministry of Fisheries involves GPS vessel-tracking systems, with a goal to roll it out for every vessel over 30 tons. Such tracking would make Thailand one of the world’s most traceable fisheries.

The Thai government was a vital partner in registering workers. Within weeks, one-stop registration and health-check centers were established in key ports, providing an amnesty for unregistered migrant workers. Having been illegal immigrants with few rights, they were provided with ID cards, a medical checkup and basic insurance. Soon these centers were processing 2,500 individuals per day. Once registered with photographic and fingerprint IDs, they could be given contracts of employment and properly recorded in vessel manifests – at a stroke making illegal treatment and trafficking easier to identify and tackle at the ports.

As a result, CP Group feels it is making progress against slave labor in Thailand’s fishing grounds. Customers who suspended business are now back on board. The Shrimp Sustainable Supply Chain Task Force now includes tuna and other seafood, and has been renamed the Seafood Task Force. Funding includes subscriptions from 32 international members, and the task force has been called “the most influential and diverse coalition of stakeholders operating in Thailand on this issue,” by the NGO Humanity United.

“The whole industry in Thailand is moving together and we continue to challenge each other to do more,” Dhanin Chearavanont says. “Did this cost us a lot of time and money? Yes. Was it worth it? Yes. The task force works because it has the ‘Three Benefits’ at heart and because it brings companies, the government and NGOs together to solve a very real social issue.”

CP Group has always been in the long game and is carrying these principles over to the next generation. Since taking over as CEO, Suphachai Chearavanont says, “We are expanding the concepts of traceability to other areas of our business – corn farming, for example, in North Thailand, where a lot of our pork feed comes from. We can’t just stop with what we achieved through the Seafood Task Force.”

Will Carnwath is a Partner in Brunswick’s Singapore office and co-leads the Business & Society Practice in Asia.