Famed explorer Sir Ranulph Fiennes talks to Alex Blake-Milton about the discipline needed to achieve a goal no other has done.

Until COVID-19, isolation for Sir Ranulph Fiennes meant the 90 days he spent floating around in the Arctic Ocean on an ice floe in minus 20°C during the 160,000 kilometer Transglobe Expedition (1979–82). Food had virtually run out and every so often a half-ton polar bear, the world’s deadliest predator with sharp claws, big teeth and capable of running at 60km/h, would climb onto his icy raft. The only means of defending himself was banging two saucepans together. “It drove them nuts. And they usually ran away,” he says.

The man the Guinness Book of Records has described as the “The World’s Greatest Living Explorer” says his solution to mental isolation, then and in the current global lockdown, is to “keep telling yourself to stay patient. Stay cheerful. And remember there are millions of people elsewhere far worse off.”

The trial of Anne Boleyn, The Battle of Agincourt, Lady Godiva, Finsbury Square and actor Ralph Fiennes all have direct family links to Sir Ranulph Twisleton-Wykeham-Fiennes, Bt., D.S.O., O.B.E. (aka “Ran”). He is an extraordinary character and a good friend. We meet in Dubai at the much-acclaimed Emirates Airline Festival of Literature where he is promoting his 25th book—his autobiography Mad, Bad and Dangerous To Know. That was how the father of his childhood sweetheart and first wife, Ginny, described him. Is he?

He admits to “Bad” from having misbehaved and spent time in various prisons, “but the Mad and Dangerous to Know … well, they’re up for debate,” he says. People think he must be crazy, and he is a serial risk-taker, but careful calculation and thorough preparation are hallmarks of all his 30 completed expeditions. His achievements include climbing the world’s highest mountains and raising $25 million for various charities.

The first time I met Ran was at The Royal Naval College at Greenwich, on the eve of the Transglobe Expedition’s triumphant return in the presence of the expedition’s patron, HRH Prince Charles. At the end of the Transglobe Expedition across both poles along the Greenwich Meridian, and after 90 days stuck on that ice floe fending off hungry polar bears, Ran and his teammate, Charlie Burton, arrived back in the UK on the Benjamin Bowring icebreaker and promptly slipped ashore to a pub on the shores of the River Thames for a quiet, well-earned pint. That was nearly 40 years ago and still the Transglobe volunteer team of 52 people reunites regularly to swap news and relive their expedition exploits, such is the strength of the team culture fostered under Ran’s leadership.

Each year he gets through a punishing schedule of lectures at the behest of Fortune 500 companies the world over eager for an edge in leadership and guidance on achieving peak performance. Sir Ran has distilled five principles of leadership from a lifetime of pushing himself and others to insanely abnormal limits. For example, in 2003 not long after collapsing from a heart attack at 59, he and co-expeditioner Dr. Mike Stroud raised a significant sum for The British Heart Foundation by running seven marathons on seven continents in seven days.

Sir Ran’s first leadership principle: “You always need to appear democratic even if you’re a real tyrant.” Leading a team across a crevasse field on Everest is a series of life or death choices that he has faced many times. With all his experience including falling into one or two, Ran knows the way across to safety. But he takes time to consult his team so that they all agree on his way and the team moves forward in complete unison. It’s a ploy he uses all the time to get people to do what he wants. I know from having worked with him for eight years at Occidental Petroleum, Ran’s only corporate job.

“Select the people you work with extremely carefully if you want to achieve your goal safely” is the second principle. All 8,000 candidates wanting to join The Transglobe Expedition team had to pass the grueling selection process for the UK’s military elite, The Special Air Service. The test has a 90 percent fail rate among the people who believe they are mentally and physically fit enough to apply. That was just for starters. Those who made it through were then subjected to various expeditions to test their mettle in the frozen wastes of Greenland and Arctic ice at minus 40°C.

Sir Ranulph Fiennes (left) and fellow adventurer Charlie Burton (right), posing for a photo after trekking across the Artic in 1982 having reached their goal: the North Pole.

“Expeditions, particularly in extreme cold, bring out people’s worst character flaws. You need to find out who they really are before you put your life, your reputation or your commercial success in their hands.” He describes the intense spirit of competition among expedition team members and the constant mental struggle not to let them outperform you. Ran’s “business” involves taking calculated risks in the most hostile environments in the world. “Finding the right people is all about ensuring the success of an expedition and understanding the candidate well enough to know how they’re likely to behave when things get really tough.

“You need to test them and test them again until you’re certain you’ve got the right person for the job. For non-technical jobs, I always recruit people on the strength of their character. Above all, I look for people with a passion and strong motivation. You can teach them everything else. Anyone with a hint of malice or one-upmanship gets rejected instantly.”

The third leadership principle is all about motivation. “Strong leaders need strong faith. That’s not necessarily a religious faith. But you need a strategy for killing the voice in your head that says, ‘give up, you can’t do this.’ For me, I want to make my father and my grandfather both proud of me. They died before I was born but they watch over me and silence that unwanted voice. I also don’t want to disappoint any of the charities for which I raise funds. There are people who depend on that money, and they give me a powerful motivation.”

The characteristic that is shared by super-achievers, in business or physical endeavours, is that “They all have absolutely unshakeable self-confidence”—the fourth principle. As Ran explains, ”There is no space or time in their heads for self-doubt or wavering.” Ran possesses a self-confidence nurtured through years’ experience of extreme physical tests and learning from the odd failure. He made several attempts before successfully reaching the North Pole without any support, hauling everything he needed behind him on a sledge. The journey is equivalent to dragging a fully stocked family freezer for 500 miles over ice ridges measuring up to 12 metres high.

On his solo attempt to reach the North Pole unsupported in 2003, he fell through thin ice into the Arctic Ocean and had to drag his sledge out of the freezing waters, sustaining severe frostbite in the fingers of his left hand. To deal with his agonizing blackened fingertips back at home, he famously decided to remove them in his garden shed on Exmoor with the help of his wife and a hacksaw. He keeps the fingertips in a Kodak film tin … of course he does.

Food had virtually run out, and every so often a half-ton polar bear would climb onto his icy raft. The only means of defending himself was banging two saucepans together.

The final principle is taking time to establish Proof of Concept. The bolder the concept, the more care and depth required for testing. When his late wife Ginny had the idea for Transglobe, they agreed it was very risky. So the two of them researched and tested the concept for seven years (without income) before trying to get it approved, raising the millions necessary from 1,900 sponsors to finance the trip, and recruiting 52 people willing to go the ends of the Earth for three years unpaid. Building a company may not carry life-threatening risks, but the need for solid Proof of Concept is still there. “My sponsors, like investors, need to be shown convincingly that what you’re proposing is feasible, the risks are manageable and above all how they will get a return for their money.”

Sir Ran hides his 76 years well and there are few signs of him slowing down. He is currently testing the concept for his next expedition, negotiating the launch of “Ran’s Rum.” In addition, he’s writing two books on Ernest Shackleton and T.E. Lawrence—both of whom were Ran’s boyhood heroes.

His remarkable exploits reflect extremes of leadership and getting ordinary people to excel. He has drawn his five leadership principles from a lifetime of achieving the seemingly impossible. He has set a tough challenge for following generations. Where is tomorrow’s Ranulph Fiennes?

Ranulph Fiennes was born in England and grew up in South Africa near Cape Town with his mother and three elder sisters. His father was killed in the final year of World War II before Ran was born. He didn’t wear shoes virtually until he moved back to England age 12. He then met Ginny Pepper, age 9, whom he later married.

He had a tough time at Eton where he was bullied as a “pretty boy.” He has described the experience at Eton as far harder than anything he faced in the Special Air Service (SAS). He frequently got into trouble for climbing towers and steeples. Having had a fragmented academic career in South Africa and England, he left school without O- or A-levels but nonetheless got into the Mons Officer Cadet School. Joining the SAS, he was thrown out after he blew up the film set of “Dr. Doolittle” (1967) because the production crew were making a nuisance of themselves by diverting a river through a small favorite village of his. He joined the Scots Greys tank regiment and served in Germany patrolling against an unlikely Russian attack.

He resigned and transferred as an SAS advisor to the Sultan of Oman’s Forces in the bitter unpublicized war against Marxist-backed guerrillas attempting to gain control of the Strait of Hormuz through which 75 percent of the world’s oil was shipped at that time. After the Dhofar War (1962-1976), Ran began his life of expeditions, books and lectures.

His wife Ginny died after they had been married for 34 years. He has been married to Louise for 15 years. Their daughter, Elizabeth, 15, campaigns actively against trophy hunting, and they have a stepson, Jack, 22. Louise is an expert horse breeder and has a herd of 20 animals. Sir Ran is credited with 24 books of fiction and nonfiction. Eighteen of them were written longhand. He doesn’t use a smart phone or a computer. 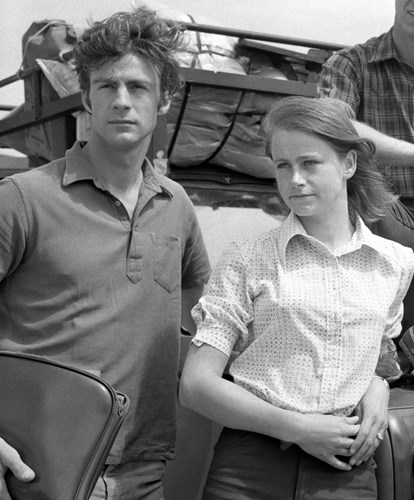 Ranulph Fiennes with Ginny, his first wife, before flying to Headless Valley in Northern Canada. She was part of his support crew.

Alex Blake-Milton is a founding Partner of Brunswick Gulf and builds the firm’s communications practice in the Middle East. He is based in Dubai.