Recent investments made in the Kingdom of Saudi Arabia’s culture sector are turning an independent arts scene into a national attraction. Donya Abdulhadi and Liza Eliano report for the Brunswick Review.

In the northwest of Saudi Arabia, at the crossroads of what was once The Silk Road and The Incense Route, stands an ancient oasis that until recently was relatively unknown outside of the Arabian Peninsula yet holds profound historical and archaeological significance. While its extraordinary rock formations are reminiscent of the famous Petra in Jordan, the walls of this ancient city date back centuries before Petra was even founded. This is AlUla, home to the Kingdom’s first UNESCO World Heritage Site, the Nabatean city of Hegra, dating as far back as the first century BCE. An area nearly the size of Belgium, AlUla today is a vast historical zone and cornerstone of Saudi Arabia’s cultural transformation.

Last year, just before the pandemic struck, AlUla hosted Desert X, a contemporary art exhibition usually held in the Coachella Valley in Southern California. Desert X is only a drop in the bucket of what is in store. Plans for AlUla include an open-air museum and a subterranean resort designed by French architect Jean Nouvel. With the recent launch of Riyadh’s annual Noor Festival, and upcoming Ad-Diriyah Biennale in 2021, there are many ambitious plans under way to transform some of the nation’s historic sites into major culture and tourism destinations. These include the restoration of the ancient Diriyah, home to the Al Turaif UNESCO World Heritage site, which will feature a range of culture, entertainment, retail and food venues, as well as the restoration of the ancient city of Jeddah, and the development of new districts such as Hayy Jameel, JAX and many others.

The revitalization of Saudi Arabia’s culture sector, marked by the launch of the Ministry of Culture in 2018 and described at length in the Kingdom’s 2019 Culture Report, builds on the rise of grassroots artists movement that has been under way for years. The recent government support is based on the idea of culture as a way of life, a contributor to economic growth and an opportunity for international exchange. The Ministry oversees the regulation, development and promotion of 16 cultural sub-sectors—including film, museums, heritage, fashion, music, architecture and design—and houses 11 independent commissions under its umbrella.

We spoke with several leading private and public sector voices from Saudi’s culture, creative and tourism industries, including artists themselves, to learn more about how this broad and growing cultural awakening is perceived in the country. 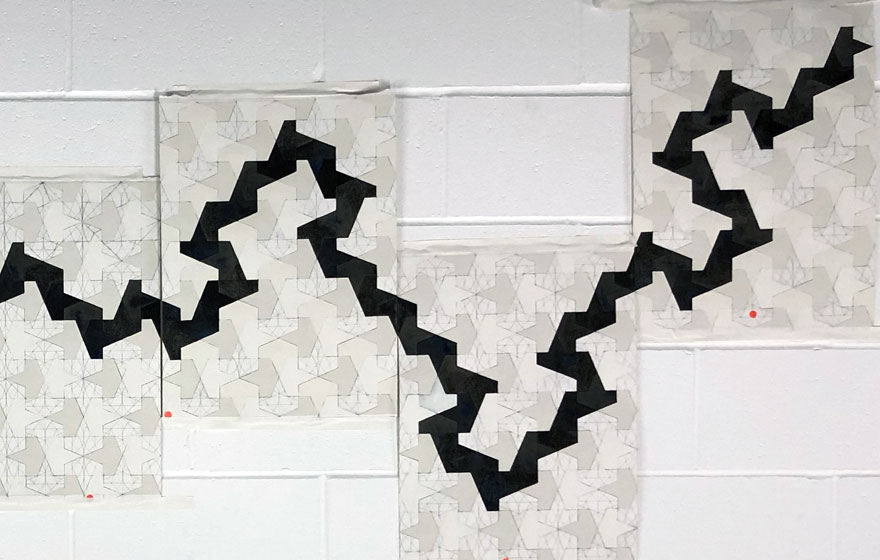 "From Here to There," by Daniah Al-Saleh, a prominent Saudi Arabian artist.

Saudi Arabia’s recent cultural developments are largely driven by Vision 2030, the country’s blueprint for a new, ambitious nation liberating itself from an economic dependency on oil. For local artists and cultural leaders, the launch of the Saudi Ministry of Culture marked the peak of a critical mass of culture by creative professionals in the Kingdom who are eager for support, opportunities, and recognition both within and outside their country.

“The government recognized the efforts of the pioneers of art in our country,” notes Lulwa Al Humoud, an internationally renowned Saudi Arabian artist. “These are the people who did it the hard way, without the infrastructure in the 1950s and ’60s—artists like Mohammed Al Saleem [known by many as the founder of Saudi Arabia’s modern art scene], Abdelhalim Radwi [a painter, poet and sculptor], Abdel Jabbar Al-Yahya [a Saudi plastic artist and poet], Mohammed Al Syam and many others.”

Alia Al-Senussi, a prominent international cultural strategist, arts patron and academic, has long been a champion of Saudi Arabia’s cultural scene and wrote her PhD dissertation on the connections between art and social change in Saudi Arabia. She works directly with many artists from the region. In an interview, she says, “The reason there is a Ministry—an institution—is because it represents a grassroots movement. There are and there have been artists.”

Saudi artist and curator, Talal Al Zeid agrees that the creation of the Ministry represents a trend already in motion. “Art is not new in Saudi Arabia. What was missing was the infrastructure around it, for it to enable us to make a career out of it. This is what these investments mean to us—they provide us with the means to turn this into a career. Thanks to these investments, there have been more opportunities where I’ve been able to showcase my work in Saudi and global art markets like London and Paris.”

Another prominent Saudi artist, Daniah Al-Saleh, says that art was often considered just a hobby and Saudi artists had little opportunity to be seen either within or outside the country. Then a movement took hold, beginning with Edge of Arabia, a group founded by British artist and entrepreneur, Stephen Stapleton and Saudi artists from the Al Meftaha Art Village in Abha, including Ahmed Mater and Abdulnasser Gharem. Edge of Arabia staged exhibitions of Saudi contemporary art throughout the US, Europe and the Gulf, introducing the next generation of Saudi artists to a wider global audience.

“The transition happened with Edge of Arabia,” Al-Saleh says. The group represents the point “when Saudi artists were propelled into the global art scene. The Saudi Art Council was formed after that. Then the Saudi private art collectors showed up.”

Speaking to the Brunswick Review in a personal capacity, Steve Bowen, Director of Communications at the Saudi Tourism Authority, says that what he sees that is different now is the country’s recognition of culture as a platform for international exchange and economic growth. “The idea that cultural sites may be an asset that other people may want to see and that may help create jobs and livelihoods for people is what is more recent,” says Bowen. 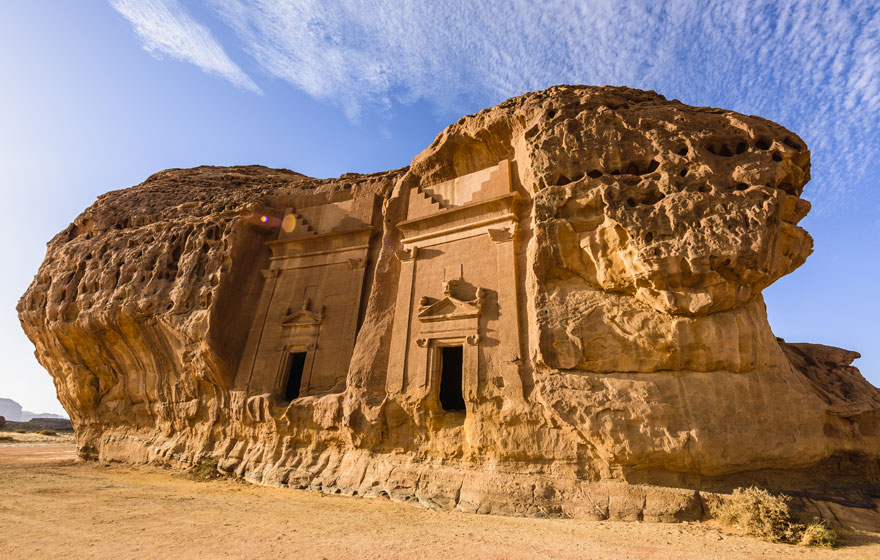 Located about 1,000km northwest of Riyadh, AlUla is one of the oldest cities in the Arabian Peninsula. It's also home to Hegra, a UNESCO World Heritage site.

In January 2020, a group called 21, 39, a nonprofit initiative of the Saudi Arts Council devoted to promoting art and culture in Jeddah, Saudi Arabia’s second largest city, mounted a city-wide event of exhibitions, public art and symposiums featuring local and international artists. (The name 21, 39 refers to the city’s geographic coordinates.) The clash of old and new that is Saudi’s art scene resonated in the streets of Al-Balad, Jeddah’s historic center that dates to the 7th century.Video works and neon sculptures could be found wedged into the small alleyways as well as dense blocks of houses made of coral stone from the Red Sea. Now in its 7th year, 21, 39 has become an important portal through which the international art world can come to Saudi and Saudi artists can gain more exposure.

The 2020 edition, curated by Maya Al Khalil, the former director of Athr Gallery in Jeddah, explored unexpected collaborations between the arts and sciences to tackle climate change, an area of vast experimentation and possibilities. Al Khalil says, “There is a very genuine effort to build the infrastructure and to empower independent initiatives. It is so important to collaborate across disciplines such as art, science, and sociology for example.”

Saudi artists like Al-Saleh welcome the greater freedom to experiment and greater international attention that government support affords them. “There is a lot of raw talent to be harnessed and polished, and the only way to get there is for the government to invest in the educational infrastructure,” Al-Saleh says.

Mohammed Hafiz, Co-Founder of Athr Gallery, one of the Kingdom’s most prominent platforms for artists, believes it is too early to pass judgment on the country’s burgeoning culture and arts scene. “Arts in Saudi Arabia is a very dynamic scene, it’s changing rapidly. The system is still not finished. This is a national ecosystem, part of a national strategy, so it takes time.

“What we can assess today, however, are positive indicators such as international experts taking interest in the Kingdom’s arts sector, the growing number of artists gaining international exposure, artists who are turning their craft into viable careers, the great support given to the sector and the belief of the leadership in our national arts scene. These indicators tell you much more about the country’s arts landscape story than merely the investments being made.”

Others we spoke to expressed the need for greater diversification in the funding of culture, calling for the private sector to become more involved in supporting Saudi’s cultural scene, including encouraging an already significant growth in the interest of private collectors.

“One of the government’s priorities is to improve the legal and regulatory frameworks that will enable more private initiatives in the arts and culture,” says Saif Sammakieh, Partner and KSA Office Head for management consulting firm Oliver Wyman. Sammakieh specializes in public sector and policy and is co-author of its Funding for Culture 2020 Report. “The target is to have the private sector engage in the form of philanthropy towards the arts, investment in creative industries, and corporate sponsorship.”

The goal is to make very visible and ongoing presentations like those at AlUla a gateway for international engagement that will further cultivate the cultural sector across the Kingdom and extend into the development of other areas as well.

As independent curator Al Khalil puts it, “The way I think about is that this is as a necessary step.”

The National Portrait Gallery’s biennial Portrait of a Nation Awards and Gala is one of Washington, D.C.’s premier cultural events, honouring contemporary Americans who have made an impact on the nation.

A Seat at the Bloomsbury Group's Dinner Table

The Charleston Trust preserves an iconic farmhouse in southern England—and, as important, it looks to continue the kinds of discussions that took place there between great artists and thinkers. Brunswick speaks with its Executive Director and CEO.