Michael Garin, CEO of Oscar-winning Image Nation Abu Dhabi, explains how, unlike the rest of the world, movie production continues in the UAE.

Over a 50-year career that’s taken him from Time Inc. to co-founding Lorimar-Telepictures and on to ING Barings, media industry veteran Michael Garin has had a hand in producing everything from “Dallas” to the Oscar-winning rock-climbing documentary “Free Solo.”

With a large proportion of the world’s population currently under some form of lockdown due to COVID-19, people are consuming unprecedented levels of content. According to the Global Web Index, more than 80 percent of consumers in the US and UK alone say they are watching more. Broadcast TV and online videos, such as YouTube and TikTok, have proven the most popular platforms, while more than two-thirds seek pandemic news online over any other activity. 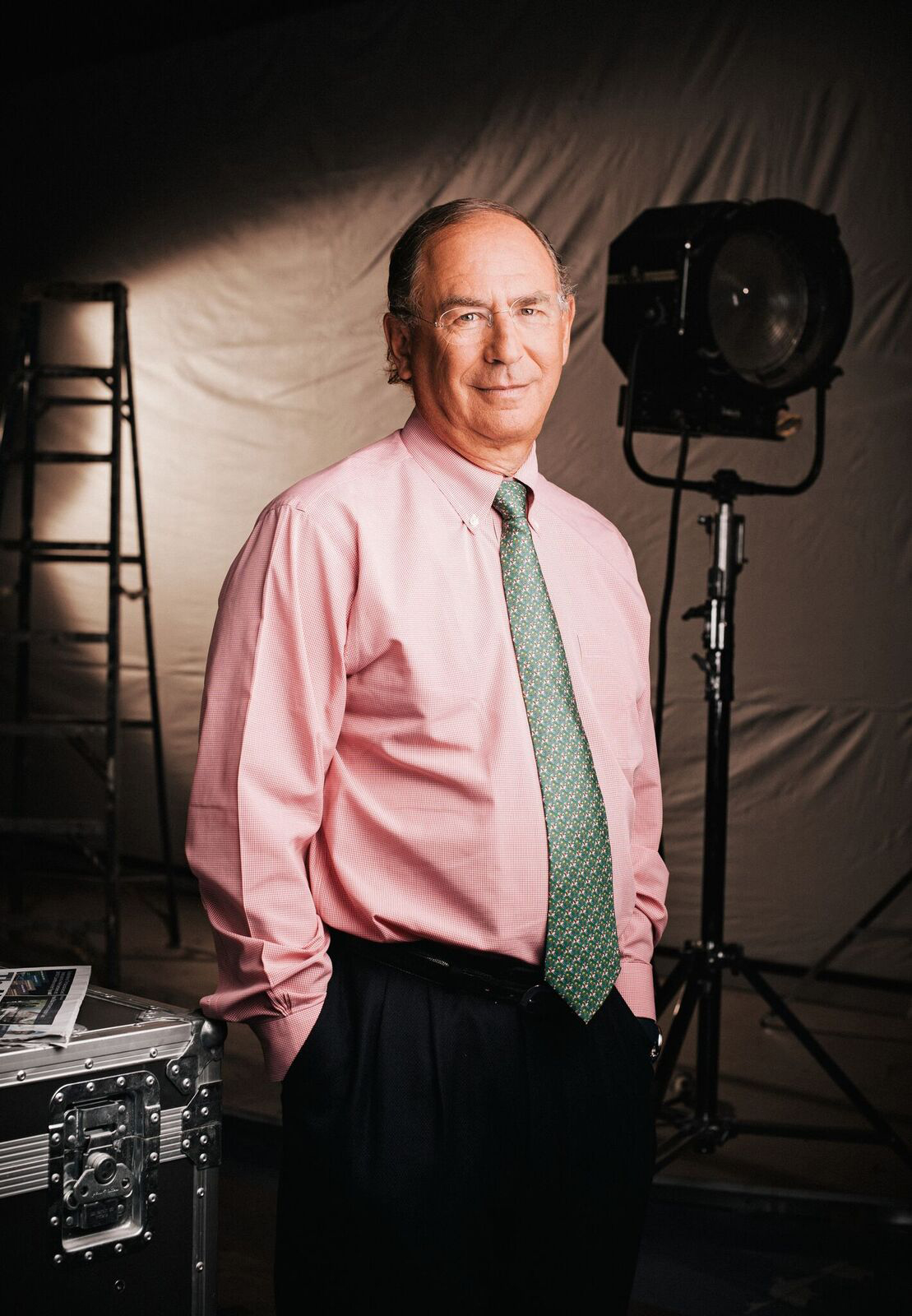 Yet the pandemic presents unprecedented challenges for the media and entertainment industry, with stalled Hollywood production, plummeting advertising expenditure and the spread of disinformation and misinformation.

Mr. Garin shared with Brunswick’s Ailsa Martin and Heather Salmond what he sees for the future of media and entertainment, along with how the UAE managed, amid the COVID-19 outbreak, to safely allow filming and production to continue.

Isolated at home, people are turning more and more to TV and film. Is it just to fill time, or is there a special magic bringing people together?
This situation underscores the general importance of film and TV in people’s lives, because they reflect the human experience. People enjoy sharing joys and tragedies. They can identify with these stories, see archetypes that mirror some of their own issues.

In the time of coronavirus, it’s a different togetherness and a different form of sharing. When you can’t connect in-person, indulging in the screen or the written word to make these connections is a comforting alternative. As a result, people are exploring content that ordinarily they would never have viewed.

For me, that’s been “Crash Landing on You”—a Korean Netflix series, one of the best television series I’ve ever seen. I never would have watched that if it weren’t for the current situation.

We have nearly 100 million dollars worth of production taking place as we speak, so post-pandemic planning is really about continuity rather than re-starting.

Cinemas are closed, releases delayed. In many countries, film and entertainment industries are struggling. What does the post-pandemic future look like?
I’m glad you asked this, because this has differentiated the UAE from nearly every other country. We have managed to continue production as a result of the great job the UAE has done to protect residents and nationals alike. I believe Iceland is the only other jurisdiction in the world that can say that.

We have nearly $100 million worth of production taking place as we speak, so post-pandemic planning is really about continuity rather than re-starting.

This will transform Abu Dhabi into a magnet for production, because our response to this crisis addresses so many misconceptions and fears about working in the Middle East. The pandemic has really demonstrated the UAE’s ability to protect people and businesses. It’s shown that the country is a safe and stable haven not just within the region but even compared with more developed nations.

In the UAE, we’re lucky to have enlightened leaders who put their people and the future ahead of themselves. That’s certainly not true of many resource-based economies.

Here, the leaders are custodians of the oil wealth, investing it wisely for future generations. And that value system extends across all aspects of society, where we see the UAE’s investment in education, healthcare, infrastructure and women’s empowerment benefiting citizens as well as expats from more than 200 cultures who live and work here. By developing strategic sectors—entertainment, tourism, healthcare and other industries—the UAE has leapfrogged from a resource-based to a knowledge-based economy.

Don’t forget there are only nine million people here, and less than a million are Emirati citizens. So, making big bets about the nation’s development requires strategic decisions.

Among Mr. Garin's production credits is “Free Solo,” which won Best Documentary at the 2019 Academy Awards.

A central part of your role is building that strategic entertainment sector and training up professionals. Can you give us a snapshot of this and why it’s distinctive in a young country?
Everyone in the entertainment world has heard stories of the legendary William Morris mail room, where titans of the industry such as David Geffen, Barry Diller, Ari Emanuel all started their careers.

In the US and other established markets, entertainment is a very hard business to get into. The mail room and these tough, low-paid, low-profile jobs filter out people who are only attracted by the illusion of glamor or don’t have the drive necessary to succeed. But at the same time, they’re an incredible platform to learn, prove yourself and to begin building a personal profession network—essential in any industry, but critically important in ours.

But you can’t have a mail room if you don’t have a company. In the UAE, we don’t have an industry that has existed for 100 years as in America. We have to build careers at the same time as we’re building an industry, so we have had to create alternative solutions to training and development.

We never hire anyone at the entry level without an internship, so they can see what the industry is really like—the hours, the challenges, the labor. And we can see whether they have the attitude, potential and the fortitude to succeed.

I have never witnessed as much raw talent as I have in the UAE. It’s a rich dividend of a 75-year investment in education, but without a lot of internships or film schools, rigorous training never existed here before Image Nation was established.

Mr. Garin is CEO of Image Nation Abu Dhabi, which created the documentary series “History of the Emirates.” It aired on National Geographic and was narrated by Jeremy Irons.

I often explain to people that I’m a terrible skier but an excellent tennis player. I first skied in my senior year of high school. I was 17, very athletic, I didn’t want to be on the baby slopes, so I went straight up to the top of the mountain with my friends. But with no training, by the time I decided to take the sport seriously I could never overcome the many bad habits that I developed. I could never be a really good skier.

But I learned tennis from lessons, so I played it the right way from the beginning. And can still enjoy a good game today.

When we find the right people, we nurture them to develop their talents. Seeing many of these people is like watching a time lapse film of flowers blooming; they’re growing and flourishing right in front of our eyes. It gives me great confidence in the future of the industry.

You’ve had a long career. What’s the secret to running a successful media firm?
As you know, I’m 74. I’ve had a pretty long career—52 years. The fundamental belief that drives everything I do is that the organization’s culture is the most important element of success.

As a CEO, I see my principal job as getting the culture right: hiring the right people, providing the resources they need, and getting out of the way.

The first company I helped create, Lorimar Telepictures, became the largest television company in the US. Before we sold it to Warner for $2.4 billion in 1989, we made many of the most successful series on television including “Dallas,” “Knots Landing,” “People’s Court,” “ThunderCats,” “Full House,” “Alf” and long-running daytime talk show “Ellen.”

“Justice,” an Emirati legal drama which Mr. Garin produced, was picked up by Netflix and is now available in 27 languages.

At one time, we had Peter Chernin who went on to run Newscorp, Brad Grey who graduated to run Paramount, Bernie Brillstein, the legendary Hollywood manager, Les Moonves, the former CEO of CBS, Bruce Rosenbloom who ran Warner Television and Jeff Schlesinger who runs Warner Television now, all working for us at the same time. These guys were all killers, and my challenge was to make sure they weren’t killing each other. In an ego-driven industry, that’s not the easiest task in the world.

Everyone at Lorimar Telepictures eventually understood that the competition wasn’t across the hall, it was across the street. I know we were successful at this because 40 years later, I e-mail monthly with many of these people. And that’s all about culture.

Interestingly, the coronavirus has accelerated this transformation, because virtual meetings require a much greater degree of transparency, connection and collaboration. At a certain point, that becomes self-reinforcing as people find that by working together, they can achieve things that they couldn’t on their own.

This model is different than television has seen before. Most streaming platforms operate on the Hollywood-style export model: we make the content and sell it all over the world.

In the past five years, we’ve seen entertainment consumption change completely as on-demand streaming services become the norm. What’s the next great trend for the industry?
The biggest and most fundamental change in the last 50 years is from linear access to random access. When I was growing up, primetime started at 8pm and the network’s challenge was to keep its audience throughout the evening with a lineup of demographically compatible programs. And you had print newspapers and magazines that you read from cover-to-cover.

Now we have on-demand, random access to information and entertainment, so people can watch and read what they want at any time. It’s a great benefit, but the consequence is people have lost that sense of discovery. When you’re binge-watching, you’re watching something you already knew existed.

But this period of isolation has forced people to change their patterns of consumption. They are discovering quality content from countries and regions they never explored before, and it’s accelerating the shift from primarily local content to global viewing.

This model is different than television has seen before. Most streaming platforms operate on the Hollywood-style export model: we make the content and sell it all over the world.

The Netflix model is analogous to the model that the music industry has used for decades: a mix of global and local repertoire. Their regional companies are profitable with artists you or I have never heard of. And occasionally you get a breakout global star like BTS from Korea or Adele, and their work can be distributed around the world to maximize value.

This is the local-global model that Netflix is now using. Their global content attracts subscribers, but it’s complemented by regional content like “Money Heist,” “Crash Landing on You,” “Unorthodox, Narcos,” or our own series “Justice,” which can be seen on Netflix in 27 languages and is one of the most popular Arabic-language series they have.

Under quarantine, people are more open to sampling this kind of content, and because it’s compelling television they’re enjoying watching it. I think this will create a lasting appetite for a more diverse menu of content—a new trend that will benefit audiences and producers alike.

Heather Salmond is a Partner and Head of Brunswick’s Abu Dhabi office, where she works alongside Ailsa Martin, an Associate.

The Wizard of Ads

How deep insight into products and consumers transformed one man into “The Father of Advertising.” By Matt Shepherd-Smith.

Putting the Art in Smartphones

Smartify, an app that was once rejected by almost every major museum, may now help them reopen safely in an era of social distancing—and transform how they engage audiences. Brunswick Arts’ Fanny Guesdon speaks with co-founder Anna Lowe.