“Leonard led a superb team that worked with Paul Volcker and an expert group to revitalize the World Bank’s anti-corruption work,” says Mr. Zoellick, now a Senior Counselor with Brunswick and a Principal of its Geopolitical practice. “These efforts included both actions against wrongdoers and preventative work based on lessons learned. Then Leonard organized a ‘Corruption Hunters Alliance’ to support courageous investigators, prosecutors and judges taking on the rot of corruption in governments around the world.” 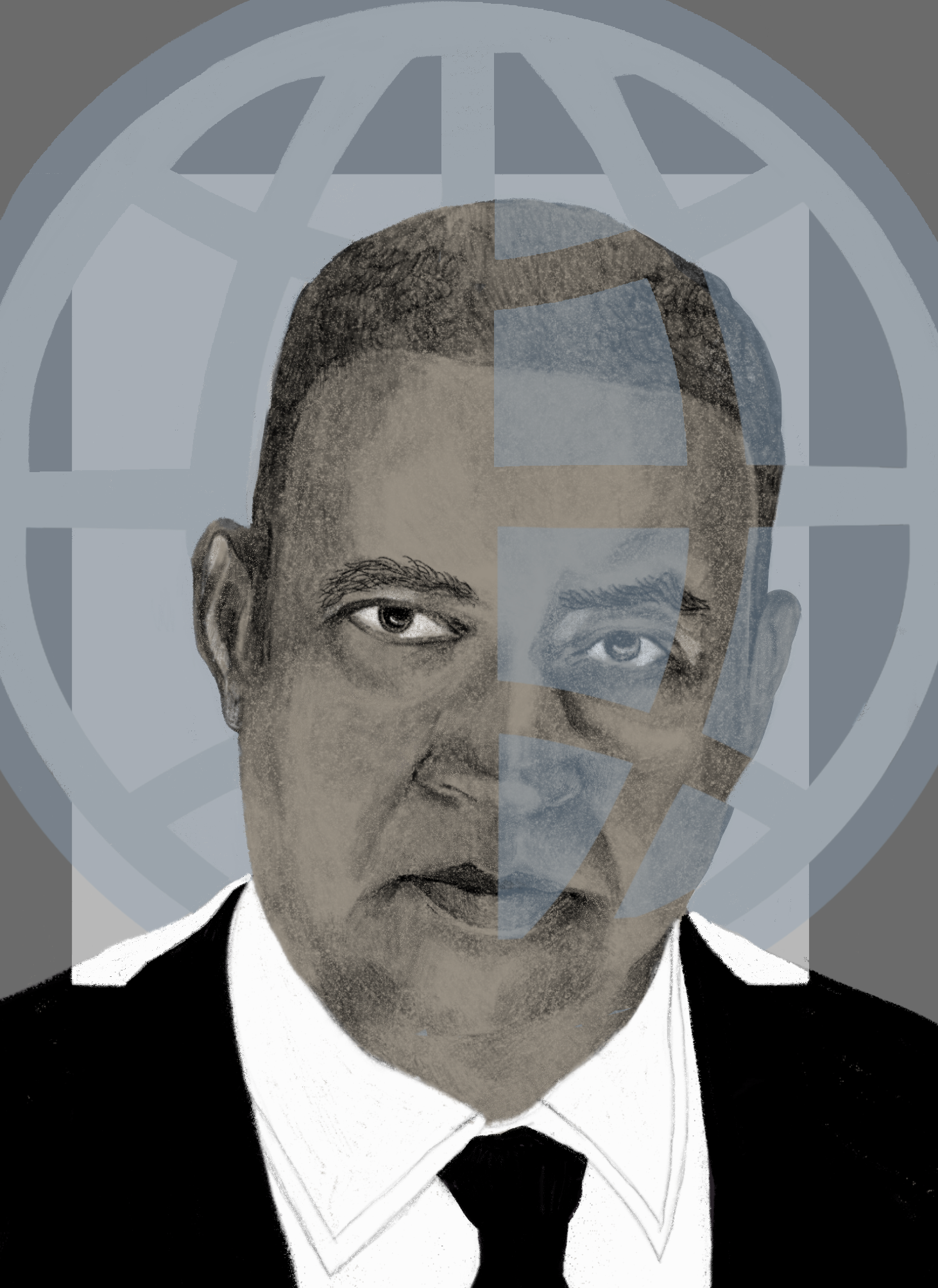 A native of South Africa, Mr. McCarthy grew up witnessing and experiencing injustice firsthand, as well as dreaming of combatting it through the law. As a law student, he took hope in reading about Brown v. Board of Education, the landmark case in which the US Supreme Court in 1954 ruled that segregation in American public schools was unconstitutional.

Following Nelson Mandela’s election as President of South Africa in 1994, Mr. McCarthy, by then a seasoned prosecutor, was named Director of Special Operations, making him the nation’s highest-ranked investigator and prosecutor of organized crime.

At the World Bank, he expanded the integrity department’s investigative and enforcement actions against corruption in countries and businesses.

Its list of debarred companies not only grew dramatically but, as a deterrent, the bank also began publishing the list. Mr. McCarthy recalls that Mr. Zoellick took the mission seriously.

“Bob called a meeting every morning at 8:30, and every morning he would ask what the bank was doing to fight corruption. So myself and others charged with this issue had to be prepared with a response, and had to show we were taking action. Fighting corruption became part of the DNA of the institution.”

The pushback from implicated companies and countries was often intense, but no more so than what Mr. McCarthy had experienced fighting crime in South Africa.

In his back pocket he carries a copy of Theodore Roosevelt’s 1910 speech declaring that “Credit belongs to the man who is actually in the arena, whose face is marred by dust and sweat and blood.” Says Mr. McCarthy: “I’ve been in the arena.”

As the founder of LFMcCarthy Associates in Washington, DC, Mr. McCarthy now advises companies on how and why to ensure that their business practices are legal and ethical.

Was it an effective deterrent to start publishing the list of firms debarred by the World Bank?
Absolutely. By doing so, we signaled to the market that these are the terms on which we do business. And people really started taking the World Bank seriously as far as anti-corruption is concerned.

You’ve said many times that the price of corruption is paid by the poor. How is that?
If a set of government officials are involved in robbing from the public till, they deprive poor people of taxpayer money. That’s one part of it.

A second part is if people in the private sector pay money for government business, they distort resource allocation, creating a playing field that’s not level, and that ultimately impacts poor people.

The IMF said in its last paper that corruption was  a trillion-dollar industry. That’s a trillion dollars stolen from taxpayers. The experts I’ve talked with say that figure could go as high as between 3 and 5 percent of global GDP.

I think it’s one of the 10 most pressing issues facing the world today. It was Bono who said that the biggest cause of poverty is corruption. It inhibits economic development and perpetuates inequality.

When it starts creating the turmoil in foreign countries you’ve seen in the Middle East, in southern Africa, in Latin America, then the suffering of the poor just multiplies.

We’d be gullible to say it’s only a Third World or a developing-country problem. It’s absolutely everybody’s problem.

What’s encouraging is that CEOs are telling their staff that compliance trumps profit, that reputation can be the equivalent of equity capital, that an ethical business can increase their profits.

At debarred companies, or companies that engage in corruption, are top executives typically aware? Or is it individuals out in the field?
It’s a mixture. At the World Bank, we saw instances where top executives were complicit. In the past, it was probably easier to blame it on the guys in the engine room. But I think with whistleblowing and the change in technology, and the quality of investigations, things that didn’t come out in the past are now coming out.

A law firm I work with did an assessment of what it called “C-suite at risk.” And their statistics showed that 53 percent of the people involved in misconduct were either at the CEO level, the managing director level or the vice president level.

Your firm advises executives in both avoiding corruption and dealing with it when it surfaces?
I’m really trying to help the private sector get ahead of the issues. I try to convince executives that a clean business is a very smart business. You can do good, you can run a clean shop, you can make money. You can be marvelously successful while doing the right thing.

Do you ever hear from top executives that bribes are necessary to win contracts in particular countries?
That was very much the going mantra in 2008. But I do think the financial crisis changed the corporate calculation. Regulation is tighter. And it’s not only in the US. You look at Europe, South America, even parts of Africa.

I think that narrative about having to pay bribes is dying slowly. As recently as 1999, bribes were still tax deductible in parts of Europe. That has changed. But it still happens. Just read the news that comes out of the Justice Department and SEC every day.

What’s encouraging is that CEOs are telling their staff that compliance trumps profit, that reputation can be the equivalent of equity capital, that an ethical business can increase their profits.

I was talking the other day with the general counsel of a very large company that had a very public corruption problem in 2008, and he noted that their share price before that scandal was $68. After they cleaned up the company and became very public about their anti-corruption policies, incorporating those policies as an operating principle, their share price rose to $115.

There’s research showing that organizations with a strong culture of integrity have up to 20 percent higher profitability. I’m not a market analyst, but I think that’s the future. I think that’s the story to tell. That’s the new incentive.

Statistics showed that 53 percent of the people involved in misconduct were either at the CEO level, the managing director level or the vice president level.

Is it sufficient for a company to require its employees to watch an anti-corruption video?
It’s a good start. At the World Bank, we created an ethics/anti-corruption online compulsory course. But it has to be more than just that.

If I were a CEO of a major corporation, I would put my staff through training with the US Foreign Corrupt Practices Act manual. Study it and apply it. It’s really well done. I wish there were a worldwide equivalent of the FCPA manual.

I also think top management should take ethics and anti-corruption training and then themselves take that training down the ranks, so that it’s not outsiders doing it. Then the staff starts saying, “This is who we are as a company.”

How many countries have an equivalent of the US Foreign Corrupt Practices Act?
It’s growing. All 44 OECD economies, major emerging market exporters and a number of developing countries have laws criminalizing foreign bribery. About 169 countries have signed up to the United Nations Convention against Corruption.

But the issue for me is not whether they have a law but whether there is a system in place for enforcing the law, a system for actually holding people accountable.

In part because Donald Trump years ago called the FCPA a “horrible law,” there’s a perception that his administration is less interested in enforcing it than previous administrations. Is there any accuracy to that?
Not in my view. The US is still 10 years ahead of the pack. No system is perfect, but the US is still very much leading in this arena.

If you do business in the United States, you play by the rules, or there’ll be consequences. That’s my take on it.

If I’m the CEO of an international company and my company forms a partnership with a company inside a foreign country where I’m doing business, am I liable for my partner’s behavior?
Yes. Under the current dictates of the law in the US and other countries, you could be liable for the actions of your joint-venture partners, your subsidiaries, or your agents.

It’s because of that that the Justice Department and the SEC have been able to effectively act in places like Nigeria and Mozambique.

I think there’s a lot of logic to the argument. It’s an effective deterrent. That’s why I believe that companies that list in the US are better able to access the capital markets. Shareholder value will increase. Because everybody knows that somebody is watching.

How can I ensure I’m teaming up with a partner with integrity?
There’s a duty to monitor. If you look at many of these cases involving corruption, it’s almost tantamount to willful blindness. Someone was asleep at the wheel. Someone didn’t do his homework.

If I’m a CEO and I want to go do business in low-income or emerging markets, I would certainly ask: “Who’s the partner there who lives up to our standards?” And you do your due diligence.

I think what good corporations are doing now in high-risk environments is that they expect warranties from their partners. Secondly, they expand the integrity infrastructure that they have to those partners.

When I was at the World Bank, a big company wanted to acquire part of a smaller foreign company, and the due diligence they conducted just drove everybody crazy. And I said to the staff, “That’s the way you do it.”

In environments where corruption is rife, you can develop things like integrity pacts. And you make it all public. You disclose a lot of information, not just in your financials, but as these projects unfold. You can also hire an integrity monitor, an outsider focused just on that and reporting to the board and top management.

I would almost encourage big corporations to communicate with local law enforcement to say, “We have this project in this country, and we want to be sure that it works according to the rules.”

Harry Clark is a Senior Counselor to Brunswick.
Kevin Helliker is Editor in Chief of the Brunswick Review, and a Pulitzer Prize-winning journalist. Both are based in the firm’s New York office.