A number of trends—some local to Japan, others global—are converging to make a historic surge of shareholder activism in Japan more likely, and the resulting pressure on companies more intense. This activist spike is set to take place while Japanese businesses are already facing mounting demands from an increasingly complex and fluid group of shareholders and stakeholders—and while activists already investing in Japan operate with greater sophistication.

Against this backdrop, the challenges facing Japanese companies are clear. So too is the opportunity for those that are proactive in engaging and telling their story to the audiences whom activists will try to win over.

Under the administration of former Prime Minister Shinzō Abe, the Japanese corporate governance model saw a series of far-reaching changes. Audit and supervisory committees were created, the definition of independent directors enhanced, and greater disclosure around cross-shareholdings and conflicts was mandated. These changes emphasized shareholder engagement and heightened transparency on the ownership of institutional investors and related proxy voting.

Japan’s Corporate Governance Code was further updated in 2021, incorporating stronger governance requirements as well as measures that mandate more disclosure around diversity and sustainability. The Tokyo Stock Exchange now requires companies listed at the top end of the bourse to “comply or explain” on a requirement to have one-third of the board comprised of independent directors. Taken together, these regulatory changes have set new expectations for corporate transparency and opened new doors for shareholders to exert greater pressure.

Activists regard Japan as an attractive target by virtue of the scale and depth of its capital market. In many sectors, even the second- or third-largest company represents a meaningful prize. In pursuit of these, activists have employed increasingly sophisticated campaigns. ValueAct, Elliott, Oasis and Third Point have all waged successful campaigns in Japan by positioning themselves as long-term, solution-oriented investors aligned with the company as well as shareholders.

The data all points in the same direction: Investors are seeking information from a broader range of sources, and those sources are increasingly online.

Adding to the Pressure

The pressure from activists is magnified by the fact that Japanese companies’ shareholder bases have become increasingly global. Asset managers such as BlackRock, Vanguard and Fidelity all have a sizable footprint in Japan—and all expect high levels of transparency in their portfolio companies.

At the same time, institutional investors in Japan generally have a much lower percentage ownership stake compared to the United States. Whereas 61% of shares of all Russell 3000 companies in the US are held by institutions, that figure in the TOPIX Index in Japan is only 27%. As a result, Japanese companies must communicate to a diffuse shareholder base that often has a wide range of expectations about governance and transparency.

Meanwhile, stakeholder capitalism’s growing momentum has added to the number of constituencies with which Japanese corporates need to engage in their defense against activists—particularly for campaigns that aren’t purely financial or short-term. Traditional investor relations has broadened from simply having a dialogue with institutional investors to conversations that now include government, employees, media and the public. 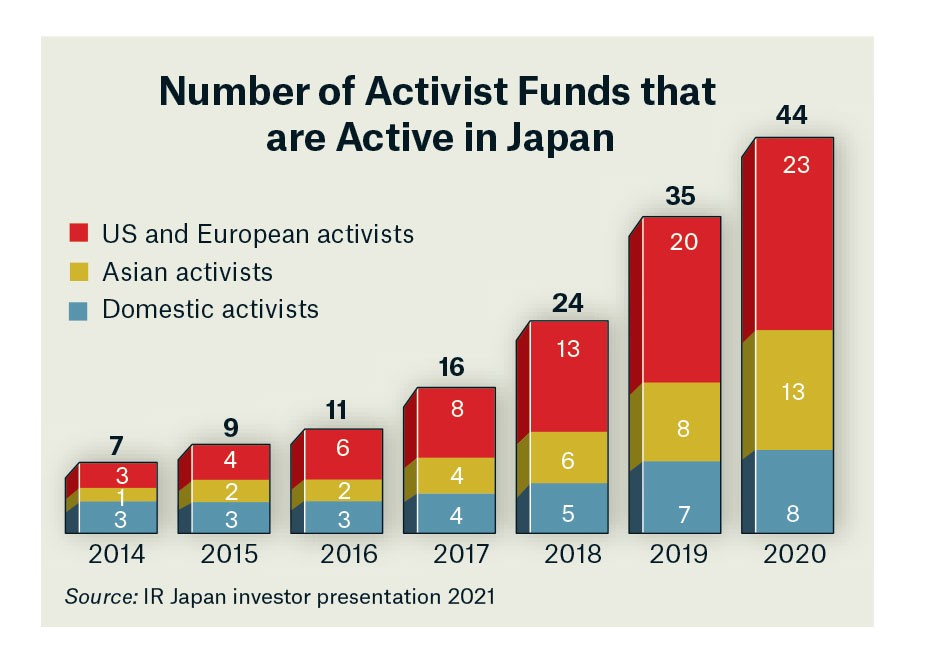 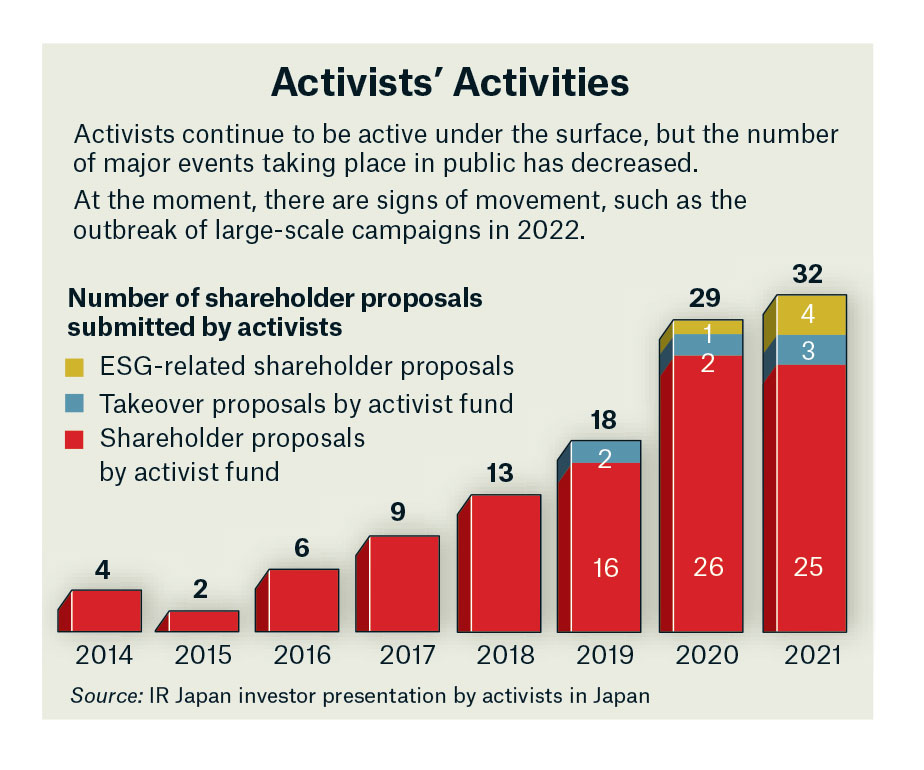 The Decisive Role of Digital Communications

It takes time to build online relationships with stakeholders, develop content, and build a team to effectively distribute that content across digital channels. Such abilities and relationships are valuable for any company—but they are vital for one that uncovers an activist shareholder.

In Brunswick’s 2020 Digital Investor Survey of institutional investors, we found that more investors than ever before are relying on digital sources to make investment decisions. Since then, COVID-19 and hybrid work environments have served to accelerate broader digital transformation trends.

Among more than 500 institutional investors surveyed globally, 75% of global investors and 68% of Japanese investors used digital sources to make an investment decision. Investor relations websites are the top digital destination for investors and the most trusted digital source of information. The data all points in the same direction: Investors are seeking information from a broader range of sources, and those sources are increasingly online.

Leading companies are reimagining their investor communications to become more virtual and digital. Many start by redesigning their corporate and investor relations websites to make them more dynamic and personalized. Another important step is developing content strategies to engage investors with transparent, comprehensive and cohesive information. For companies in Japan, making these materials available in both Japanese and English—and both versions easy to find—will help appeal to local and international investors.

Digital opens the door for richer storytelling to all stakeholders—not just investors—and can bring the business, its people and its products to life through film, animation and interactive features. Sumitomo Corporation, for example, highlights each of its business lines with videos, infographics and case studies. Kao uses a novel ESG Data Hub to disclose non-financial indicators
with stakeholders.

It’s not enough, however, to build a resource-rich website and expect visitors to come to you. Shareholders, just like other public stakeholders, are accustomed to information coming to them via social media and other digital platforms. Companies need to engage their stakeholder audiences on their preferred platforms. That means telling an equity story with a consistent cadence of digital-first messages through corporate social media accounts, online events, YouTube and hyper-targeted digital advertising.

Hitachi, for example, simulcasts its events online and posts its videos to YouTube. Z Holdings developed a digital-first integrated report portal featuring data visualizations, while SoftBank Group has taken the unexpected approach of livestreaming its earnings via Twitter.

Similar creativity needs to be employed in engaging financial media. Investors are increasingly consuming podcasts and newsletters, presenting opportunities for companies to expand media relations beyond the traditional financial outlets.

Building greater resilience begins with better preparation. Anticipating the digital strategies activists may apply helps companies better prepare for them. The goal, however, is to not simply build a defense strategy, but to develop digital capabilities that empower a company to tell its story with greater speed, clarity and effectiveness to the audiences that matter most.

Craig Mullaney is a Partner based in Washington, DC, specializing in leadership, Japan, and corporate digital communications. He is a New York Times bestselling author, and a trustee of the United States-Japan Foundation.

Yoichiro Sato is a Partner based in Tokyo. He was previously a Vice President at Goldman Sachs, and from 2013-2015 served as Prime Minister Shinzō Abe’s special assistant on foreign affairs issues at the Office of the Prime Minister of Japan.

Ema Shingai is an Associate based in Brunswick’s Hong Kong office. Kyoko Kado is an Account Director based in Tokyo.

The day after his retirement as General Counsel for Panasonic, Laurence W. Bates talks to Brunswick’s David Ashton about his personal stake in transparency and his long career bridging cultures.