An attendee stands before a Black Lives Matter mural with George Floyd’s image at the start of a candlelight vigil and march in Minneapolis October 14, 2020. The gathering was in honor of what would have been Mr. Floyd’s 47th birthday.

Brunswick’s Jon Miller looks at the landscape of challenges ahead for business.

As the lockdowns of 2020 began, Brunswick hosted a series of webinars looking at the expected societal impacts of COVID-19 and exploring the implications for business. One of the themes we stressed was that the pandemic would trigger a multiplier effect on the issue of inequality—a vicious spiral in which the pandemic would exacerbate inequalities, and inequalities would exacerbate the spread of the coronavirus.

And that’s exactly what happened. The pandemic quickly drew attention to the stark inequalities within many advanced economies: The poorest have been hardest hit by the health impacts of the disease, and also by the economic shocks that followed, even though they are often critical workers on the front lines. The rich, meanwhile, were better able to insulate themselves from the worst of the pandemic—even enjoying a stock market rally.

And then on May 25, George Floyd, a Black American man, was killed in Minneapolis by a white police officer, an event captured on video as it happened. The gruesome footage- shook the world. Mass protests took place in the US against racial injustice, but were also echoed in more than 60 countries—an unprecedented spontaneous global mass response.

Many business leaders and corporations were quick to speak out in support of Black Lives Matter, and against racial injustice and against systemic, structural racism. However, there’s a risk for leaders who speak up but don’t have anything meaningful to say on the underlying economic inequality issues—after all, companies are regularly challenged about fair pay, pay gaps, worker welfare, corporate tax, share buybacks, CEO bonuses or dividends. Responses on racial inequality need the same deliberation to avoid being seen as mere lip service. 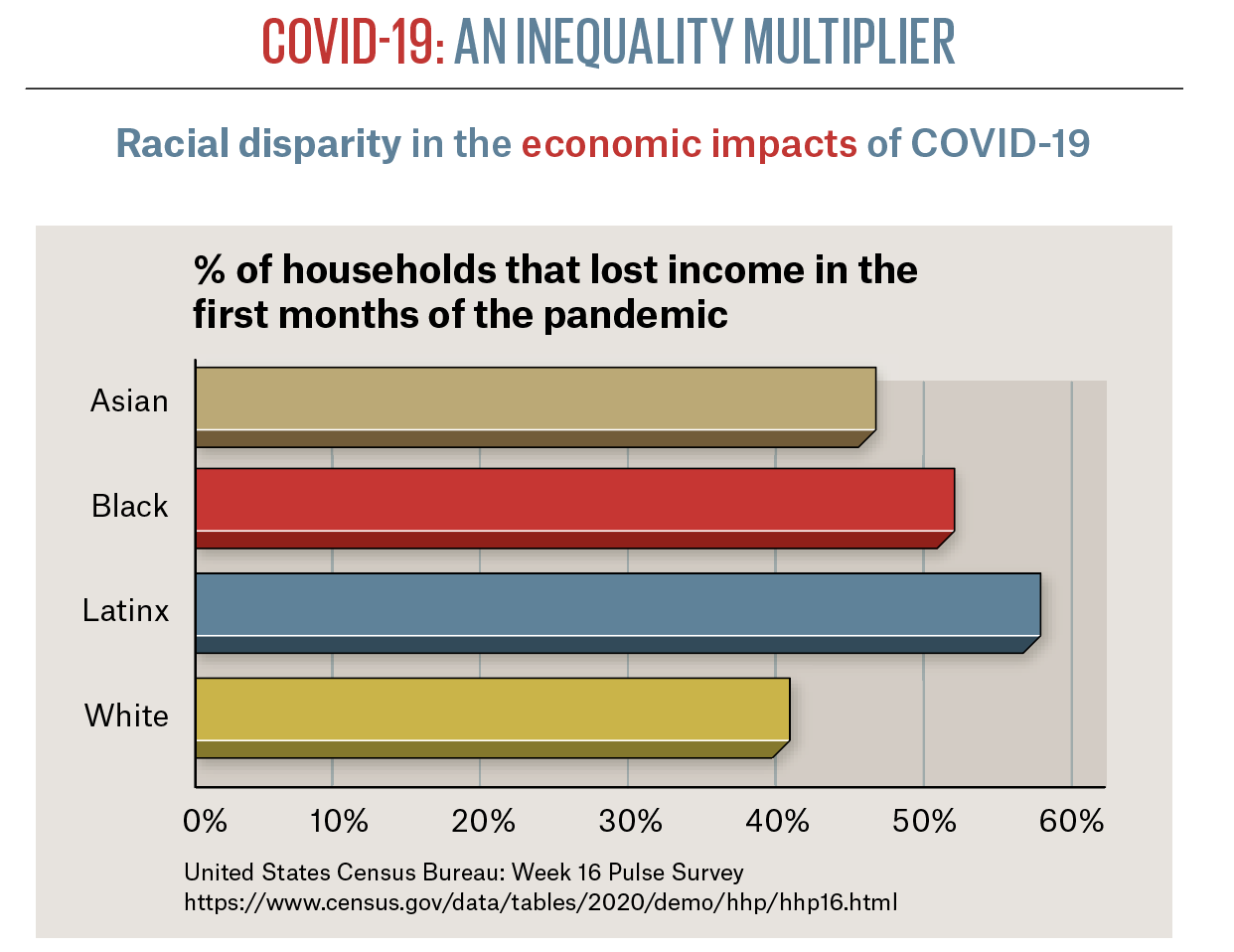 What do businesses need to know about this complex, cross-cutting set of issues? What are the risks? What are the opportunities to show leadership? Inequality is the Issue Focus for the second Brunswick Social Value Review, where we explore these questions. We begin by looking at the data on inequality, and we describe how the different dimensions of the debate connect in our Issue Map (Page 8). We hear from John Rogers, founder of Ariel Investments, the first Black-owned asset management firm, and a Director at  McDonald’s and Nike, on why “Black Wealth Matters” (Page 11). Nigerian LGBT+ activist Bisi Alimi talks about the importance of taking an intersectional approach to diversity issues (Page 23). Lord Karan Bilimoria, president of the Confederation of British Industry, talks about the launch of Change the Race Ratio, a new campaign to set targets for racial diversity in business leadership (Page 21); and John Rice, the founder and CEO of Management Leadership for Tomorrow (MLT) talks about a breakthrough certification program aimed at helping Corporate America turn its pledges and promises on racial equity into tangible change (Page 18).

Inequality is not a single-issue challenge; it has many faces. To help business get to grips with this, and to unlock new ways of companies looking at where they can play a positive role, we have developed an Issue Map of Inequality.

Across all the dimensions of diversity—including race, ethnicity, gender, disability, sexual orientation—the map shows a negative loop between the drivers of inequality and the impacts of inequality. For example, children from lower income households will have lower levels of educational attainment and worse health outcomes, which in turn impacts their ability to generate income and accumulate wealth, while the reverse is true for higher income households. This helps explain the long-term trend in the data showing that inequality is growing.

Within this loop we can see the main issue areas of challenge: Employment, which is associated with a Living Wage and Conditions, and also Inclusion & Diversity. Employment is also linked to Education, with its ties to Income and Housing. And of course Health includes Mental Health and Substance Use. Justice—Access to Legal Services and Policing—is a major dimension in the conversation about inequality, as is Social Mobility, linked again to Inclusion & Diversity. For businesses, this map links to a growing conversation about the Future of Work, impacts of the Gig Economy, and AI Automation. And, ultimately, all of this adds up to Life Chances.

To explore these dimensions further, we will look at key associated data points in the following pages.