The country’s romance with the typewriter is far from over,  says Brunswick’s Khozem Merchant

For a measure of the typewriter’s role in the Partition of Imperial India – seriously – consider the following quote by the founder of Pakistan, Mohammed Ali Jinnah: “I will tell you who made Pakistan. Myself, my secretary and his typewriter.”

Is that irreverence from the enduringly joyless Jinnah? It certainly remains a matter of mirth today for Rajesh Palta, a third-generation typewriter dealer and repairer in Delhi and a beguiling raconteur of typewriter tales.

“Typewriters are long-distance runners,” he says, as we tour his tiny shop, a dusty tutorial on the history of the contraption. “Electronic typewriters last 10 years; laptops can be upgraded in a year. But manual typewriters can endure for 50 years without much repair.” Fixed and repainted by hand, these behemoths are on sale at Palta’s Universal Typewriter Co, an outlet representing a cottage industry of collectors, admirers, users and repairers of the indefatigable instruments.

When Pakistan was yet putative, Palta’s father, Diwan Chand Palta, a salesman for the American typewriter manufacturer Remington, fled the city of Lahore, inside present-day Pakistan. He took with him four boxes containing the best-selling Model 12 machines, on whose keys the history of India was both made and recorded. Foreign brands held a monopoly under Imperial rule at the time; independent India sought an indigenous model. Such a product carried a message of empowerment, economic self-reliance, national modernity – and, of course, it allowed useful things to get done, in triplicate. Today, the continued popularity of the old machines serves as a mild, homegrown rebuke to the global craving for up-to-the-minute upgrades.

The Universal Typewriter Co is a humble home for the nationwide curiosity that surrounds the old machines. Despite the availability of computers and digital printing services, many repaired manual typewriters are still sold at the shop each month.

The maker of India’s own brand was the Godrej family, a powerful Mumbai manufacturer, then and now. Jawaharlal Nehru, India’s first prime minister, leaned on patriarch Naval Godrej to support his industrial self-reliance – a portent of the current government’s Make in India impetus.

With Remington already assembling machines in Calcutta, Godrej wanted to create a domestic competitor. India’s first typewriter rolled off a Mumbai production line in 1955. A flawed copy of a US model, it had an erratic ribbon movement that induced a fading print. It would be nearly two decades before Godrej could produce a machine that could usurp Remington as the market leader. In the 1980s, the US brand was finally done in by militant labor unions in Calcutta.

When the industry peaked in the early 1990s, most of the 150,000 locally made typewriters were Godrej. But the rise of electric typewriters and computers posed existential threats. Even with exports to eastern Europe and Africa, the new millennium found Godrej living on the edge. In 2011, the Godrej facility, the last typewriter factory in the world, closed, attracting global attention.

Yet, the typewriter endures. India’s vast bureaucracy is still the “eighth largest generator of manually-typed words in the world,” says the Godrej-commissioned history, With Great Truth and Regard (Roli Books, India). As recently as March, All India Radio, part of the state-owned broadcaster Doordarshan, ordered and paid Rs34,800 ($541) for “two numbers Godrej latest model prima typewriter English Keyboard” (sic).

In rural areas, where most of India’s 1.3 billion people live with patchy power supplies, manual machines are common – not just sensible but necessary. In addition, many public sector employers feel typewriters are still the best way to train new hires in touch typing. In Maharashtra’s bureaucracy, exam-tested typewriter skills are a must for prized data entry work.

As these examples show, the typewriter is no mere anachronism but, in fact, points to the larger forces at play at the heart of India’s modernization: a typewriter-trained bureaucracy slowly moving online; parlous power supplies that force the rural majority to retain the manual instrument for communication with the world beyond; and skills training for the new economy to prepare many of the 1 million entrants to the labor market each month (see “Cashless,” Page 7, for more on India’s economy). 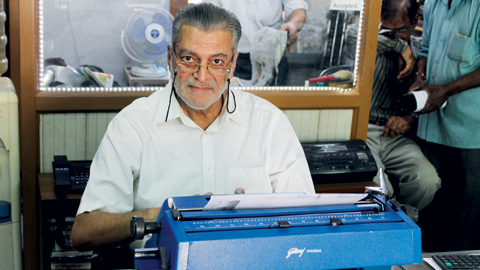 Rajesh Palta, proprietor of Universal Typewriter Co, sits at a machine made by Mumbai-based manufacturer Godrej.

These all meet in a uniquely Indian way at the nation’s law courts, under a backlog that estimates say will take decades to deplete. Even with progress being made in taking court proceedings online, a cottage industry thrives involving rows of perspiring men outside of courthouses, hammering away at typewriters propped on makeshift desks – a stool, for instance, or the back of a bicycle. Courts require documents in triplicate. Using a typewriter and carbon paper is cheaper and more reliable than printing from a laptop, computer or printer. Such street-side self-employment is an important part of the local economy, and reflects “the sociability of the streets as an outside workplace,” according to the Godrej history.

The typewriter’s social role has long been chic: in 1970, Bollywood’s Bombay Talkie celebrated the romance of women and work with a song and dance, set against a giant typewriter. In the 1980s, Godrej used the marketing skills it deployed to sell its soaps and locks to launch national typing contests. Both celebrated and aided a social revolution to a new clerical order: women in offices and India’s caste-based social fences quietly falling to allow more mingling in the new, typewriter-dominated workplace.

That social appeal is still notable today. Young people in particular want the old machines, Universal Typewriter’s Palta says. “They say a typewriter allows them to focus on their creative skills – and not get lost in a technical tussle when using laptops.” His shop receives regular inquiries from youngsters, “yearning for the creativity unleashed by using a manual.” Sidharth Bhatia, editor of With Great Truth and Regard, described this trend as “hobby typing” after watching a teenage girl, with her father beside her, tell a puzzled Palta about the creative buzz she felt when writing on an ancient typewriter. Her father bought it.

Palta says his four decades in the trade make him the uncontested first call for curious teenagers or those needing “any typewriter things across India.” Nearby, a colleague was on a call with a buyer. Palta gestures to the phone: seven more ancient, coal-black hulks repaired and working like a dream, heading for Chennai, south India, he says.

Khozem Merchant, former President of Pearson India and a correspondent for the Financial Times, is a Partner in Mumbai and leads Brunswick’s India business.