The Greens: "Things Will Be Different" | Brunswick

Robert Habeck and Annalena Baerbock, federal co-leaders of the Green Party, appear at a party leadership meeting in Berlin in August.

The Greens: "Things Will Be Different"

“What I really want is to take charge.”

This was the blunt take of Germany’s Green Party leader Robert Habeck, (“Das, was ich eigentlich will, ist die Verantwortung übernehmen”), whose party was often forced simply to watch from opposition sidelines during the first months of the COVID-19 pandemic. Such grand ambitions make the coming months even more important for the party, if it is to build on the surge in popularity that has positioned it as a force to be reckoned with in the Bundestag.

Four decades after its foundation, the former “anti-party party” Bündnis 90/Die Grünen, or Green Party, has become an integral part of the German political system. It is now part of coalitions in no less than 11 of the 16 state governments, and it currently seems unrealistic that a national government can be formed after the next federal elections in September 2021 without its participation.

The participation of Green parties in high-level politics has also been growing beyond Germany’s borders in recent years: At the 2019 European Parliament elections, the number of Green MPs increased from 40 to 56, while in Austria, the Greens have found themselves in government for the first time ever, having entered into a coalition with the conservative Austrian People’s Party (ÖVP) in January of this year.

In view of the corona pandemic, the European Greens are demanding that politics not return to business as usual. “The economic stimulus programs must therefore be thought of in European terms or coordinated across European countries—and linked via the Green Deal, for example—so that all countries in the European internal market can develop,” says a Green policy paper on combatting the consequences of the pandemic. The idea is to take greater account of the needs of small and medium-sized economies and thereby realign the economy for the whole EU. In the view of the Greens, strengthening multilateral alliances such as the WTO would provide an opportunity to use the crisis for economic and social change.

At the 2019 European Parliament elections, the number of Green MPs increased from 40 to 56.

No one really saw all this coming 40 years ago. Having been formed out of a broad collection of student and popular protest movements in the 1960s and ’70s, the German Greens entered the Bundestag in 1983, where they were viewed with suspicion by the established parties. Forming a coalition with the Greens seemed out of the question. On several occasions over the years, notably in the 1990s after reunification with East Germany, the party lost critical support and had to fight for a return to the German Parliament.

But in the spring of 2019, hundreds of thousands of people took part in the “Fridays for Future” climate demonstrations. By June, polls recorded an enormous leap in Green support. The party won 20.5 percent of the vote nationwide in the 2019 European elections, with big wins as well at other regional polls. The escalation of the debate on climate protection, one of the party’s core issues, spurred new growth in its ambitions. With the high poll numbers of mid-2019, some in the party leadership began even to dream of moving into the Chancellor’s office. But in the wake of the COVID-19 pandemic in spring 2020, the popularity of Angela Merkel’s governing coalition rose sharply while the Greens saw their poll numbers slip to well below 20 percent, showing how unpredictable political prospects can be.

Yet even if the Green Party has to redefine its role in times of crisis and economic downturn, they are sure to be involved in numerous political processes over the coming years at all levels of government. At the Federal Party Congress in Bielefeld at the end of 2019, the party’s will to take charge—to be the party in power—was repeatedly emphasized. The tone has been that of a party capable of governing. No longer do they need to woo only left-wing votes, but also the bourgeois milieu, implying a rejection of some of the “utopian” demands of the past.

Are Bündnis 90/Die Grünen on the way to becoming a new popular party? And how much radicalism and adaptation can and must a party afford if it wants to represent broader sections of the population? These are questions that not only determine the future of the party itself, but also influence important decisions in German politics.

Avant-garde or conformist?, edited by Brunswick Partner Michael Wedell and Berlin publicist Georg Milde and to be published in October by Christopher Links Verlag, gathers prominent contributors who want to explore the character of the party. Included are important voices such as the newly nominated SPD candidate for chancellor Olaf Scholz and Germany’s Federal President Frank Walter Steinmeier, who gives a very clear analysis of the Green’s development to where they are today: “The Green Party has changed this country, not because it fought against ‘the system,’ but because, in respect for the rules of democracy, it dared the ‘long march through the institutions’—and obviously arrived safely at the other end. The history of Bündnis 90/Die Grünen shows If you want to change democracy, you must first see yourself as part of it.” 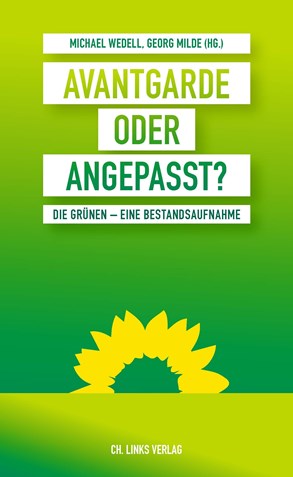 In the first section “Against the Light,” the Green’s political competition has its say one year before the federal elections; in the second, “In the Mirror,” Green politicians look at their party itself; and in the third, “In Profile,” the Greens are examined from the perspective of civil society. The contributions shed light on where the Greens come from, how they have changed over time, and what their new role might be. A wide variety of positions are expressed. Olaf Scholz reminds us that the Greens and SPD are not cut from the same cloth, although the CDU politician Philipp Amthor claims that “the Greens are and will remain a left-wing party,” a sentiment contradicted by Dietmar Bartsch, parliamentary leader of the Left Party in the Bundestag: “The Greens weren’t originally a left-wing party.”

A quarrelsome volume filled with quarrelsome characters— the book aims to facilitate debates, such as the conversation between Luisa Neubauer and Winfried Kretschmann that was conducted especially for the title, which shows the young generation has a much more radical attitude towards ecology. Avant-garde or conformist? makes it clear: Either the Greens are shaping the present, or they are being overtaken by it.

The fact that the Greens now find themselves in no less than 10 different party constellations and rankings in various coalitions at state level—whether with the Christian Democrats (CDU) in Hessen or as part of a minority government with the Social Democrats (SPD) and left-wing Linke in Thuringia—demonstrates both the opportunities and risks associated with openness in all directions.

Despite their changed starting position, the Greens’ are still going into upcoming elections looking strong and Green participation in the next federal government still seems realistic. The momentum of last year’s “Fridays for Future” has levelled off. Bundestag President Wolfgang Schäuble (CDU) pointedly described that surge as a “wave of sympathy” on which the Greens “have recently been sailing strongly with the zeitgeist.” In any case, great opportunities are opening for the Greens. With outside influences—from Fridays for Future to the COVID-19 upheavals— it’s now up to the Greens themselves to take advantage of those new opportunities.

The fact that the Green’s new policy platform is much shorter than its predecessor from 2002 underlines how the party is much more open to coalition than before. The former “Agenda Party” was mainly occupied with theory rather than practice. The best example of the party’s transformation: while the Greens once took issue with technology, they now view it as part of the solution to the problems they want to tackle.

“We want to draw the contours of a resilient democratic order and a crisis-proof society. That is why we are determined to see 2020 not only as a year of crisis but also as an opportunity for new perspectives,” the party says. “It should stand for the beginning of a new phase of politics, for the politics of a new era in which our economy will be in balance with nature. An epoch of cooperation, alliances and collaboration, of international solidarity—2020 can be the turning point: from here on, things will be different.”

In concrete terms, this points to demands ranging from a social-ecological mobility policy that leads to changes in the transport sector, to the development of a green market economy, more investment in education and digitalization, and a “new social security promise” with solidarity-based citizens’ insurance and “social services that secure our livelihoods.”

We want to draw the contours of a resilient democratic order and a crisis-proof society. That is why we are determined to see 2020 not only as a year of crisis but also as an opportunity for new perspectives.

“This draft is the answer to the outdated concept of the old ‘people’s parties’ of the 20th century,” explained Michael Kellner, the federal managing director of the Greens, when presenting the first version of the policy platform, which is currently being discussed within the party. “It defines us as a modern, cooperative party who can make a claim to represent a majority of society.”

Katrin Göring-Eckardt, faction leader for Bündnis 90/Die Grünen in the Bundestag, explains what distinguishes her party from its political competitors: “The idea of alliance has changed the Greens and is perhaps more valid today than ever before. It has changed from a historical self-description to a promise for the future. The old traditions of Christian and social democracy are losing their binding effect—in Germany and in other mature democracies even more so. Aligning your politics according to your origins and social milieu no longer counts for much in a liberal and individualized world.

“However, one must actively commit oneself to an alliance. This is in line with our political understanding of engaged citizens, who stand up for their interests and freely decide what they want and with whom they want to join forces. Our alliance is passionately committed to its goals—saving the environment and climate, and preserving our planet.”

Recently, the Green leadership has not only declared its aim to shape the political debate across all areas of politics, but explicitly claims a leading role for itself in turning debate into policy. This new self-confidence is showing results: Should the party form part of a federal coalition next year, they will attempt to push through a general speed limit of 130 kilometers per hour (80 miles per hour) on German motorways as quickly as possible. Other plans are likely to follow, such as an additional levy for greater animal welfare. If voters’ reactions are anything to go by, the time until the federal elections next year promises to be exciting.

Read the German translation of this article here.

Michael Wedell is a Brunswick Partner based in Berlin. He previously spent 10 years at METRO AG, where he most recently headed the Corporate Communications and Public Policy department. He also served as Director of Corporate Affairs at Dresdner Bank and Head of Public Affairs and Government Relations at Vodafone Germany. Together with the publicist Georg Milde, he is editor of the forthcoming book of essays on the Green Party, "Avant-Garde or Conformist?"

The fate of the global economy does not rest on the US election, says Dr. Moyo. “It’s bad, whatever happens.” By Kevin Helliker.

The fate of the global economy does not rest on the US election, says Dr. Moyo. “It’s bad, whatever happens.” By Kevin Helliker.