Joke's on You | Brunswick
Brunswick Review The Crisis Issue

How to transform online pranks to advantage.

One afternoon last may I discovered that people online were poking fun of my hometown, Kansas City. Spurring their ridicule was a photograph of a tourism poster. 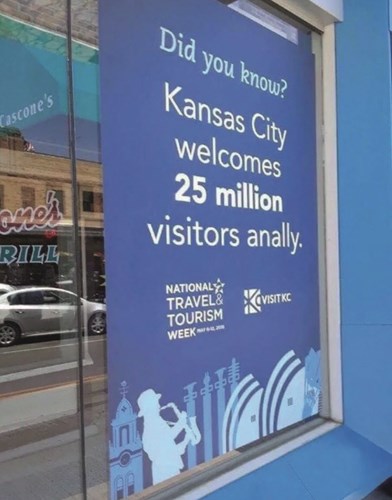 “Kansas City Welcomes More than 25 Million People Anally,” it said. That misspelling, I feared, would reinforce a bi-coastal perception of my Midwestern home as a backward Cowtown where people don’t know how to spell. It was posted on a Twitter account called You Had One Job, a collector of accidentally funny photographs. Within hours, the posting had more than 1,000 re-tweets and was gaining momentum on Facebook.

It took me only seconds to discover that the photograph was a fake. Visit KC, a local tourism agency, proved it by posting on Twitter the actual sign, with “annually” correctly spelled. On May 7, the day You Had One Job posted the fake photograph, the Kansas City Star quickly published a story correcting the record. Less than 24 hours after posting the photograph, You Had One Job took it down.

Still, the fake photograph continued making the rounds on social media, amusing readers eager to believe that Kansas Citians can’t spell. Wondering what my hometown should do, I sought the advice of Austin Rathe, a Brunswick digital specialist who previously ran or helped run various political campaigns, including Tim Kaine’s successful run for the US Senate in 2012. Although Austin knew nothing about Kansas City – he’s British – he understood the anguish of seeing one’s little-respected hometown mocked yet again. Austin is from Liverpool, a city well acquainted with snubs (despite having produced John Lennon and Paul McCartney).

When he saw the fake photograph, Austin laughed. “It’s funny,” he said. “It’s quite a good Photoshop job.” Then he proceeded to put me at ease. “If you Google it now, as I just did, the news coverage is all about how it’s fake,” he said. The effect, he added, is that the correct ad has been seen by millions more people than would have seen it at the Kansas City trolley station where it was hung. “Kansas City got the benefit of the joke,” he said.

Any organization can fall victim to a prank. The bad news is that it can be impossible to anticipate. “If Kansas City were doing some risk audit around reputation, this prank would have been impossible to foresee.” The good news is that online pranks can be relatively easy to correct, for organizations prepared to move fast. “Speed is paramount.” As obvious as that sounds, many companies aren’t prepared to act fast. “At a lot of places, social media is outsourced or operated by one part of the company or executed on a day-to-day basis by relatively junior staff members. Unless you put a social media crisis plan in place, it may not be clear who can put something out on your Twitter feed right now. Who will answer that phone at one in the morning? Who can press the red button and correct it straight away? Do we have the right mechanism, the right process, in place for a quick response? Have we rehearsed it three times?”

What if, in the KC case, the misspelling had been real? “Then you’ve got to think carefully about how to get in on the joke, how to apologize or correct it while saying, ‘Yeah, very funny.’” As an example, he notes that KFC, after running out of chicken in the UK, ran a full-page newspaper ad featuring the chain’s iconic bucket – but with its famous three letters rearranged to say, “FCK.” “They apologized in a way that was funny,” he says.

Months later, the fake KC photo continues popping up on social media. But Austin says not to worry. “It’s making the rounds because it’s funny. But the message that it’s fake is out there, prominently, so no one is taking away the impression that people from Kansas City don’t know how to spell.”

Austin Rathe is a Director in Brunswick’s specialist digital and social media team.

Kevin Helliker, Editor in Chief of the Brunswick Review, is a Pulitzer Prize-winning journalist. Both are based in New York.

Singing from the Same Song Sheet

How to form a winning chorus from your leadership team.