When Mary Wittenberg runs down the streets of New York, strangers yell hello. When she walks, people stop to tell her that she changed their lives. Her jogging partner, Raul Damas, says, “Running in New York with Mary is like touring a city with its mayor.”

Her fame derives from a position that she left two years ago. For 10 years ending in 2015, Wittenberg served as Chief Executive of the New York Road Runners, a nonprofit that organizes dozens of running events a year. The most famous of them – the TCS New York City Marathon – shuts down 26.2 miles of city street on the first Sunday of every November so that the world’s largest field of marathoners can run past more than two million cheering spectators. As the director of that race, Wittenberg every October became the most visible sports executive in New York, overshadowing her counterparts at the Yankees, Mets, Giants, Jets and Knicks. In press conference after press conference each October, Wittenberg offered tutorials on how to inform, humor and charm the media, all with a deep sense of authority. “Wittenberg Runs the City,” a New York Daily News headline once blared.

At NYRR, Wittenberg helped persuade multitudes of ordinary people to slap on sneakers and hit the pavement. Her running partner, Damas, personifies the Wittenberg effect. He wasn’t a serious runner until he joined the board of NYRR, and fell under her influence. Now he finishes marathons fast enough to qualify for the prestigious Boston Marathon. “Mary makes those around her better, and she also makes you want to be better,” says Damas, a Brunswick Partner.

Now Wittenberg aspires to become a fitness Pied Piper for the world. Two years ago, Richard Branson, a founder of London-based Virgin Group, hired Wittenberg away from NYRR to run a new subsidiary called Virgin Sport. The move created intrigue in the fast-growing endurance-sports industry: what exactly would Virgin Sport do? Would it follow the lead of fast-growing industry giants like World Triathlon, owner of the Ironman brand, by acquiring existing races?

Fitting for an entrepreneur of Branson’s standing, the answer is a new concept called the sports festival. Anchored by a half-marathon run, the weekend-long event also features shorter runs, non-stop fitness classes, music, food and physical-activity challenges for children. Some events are free, many not. Virgin Sport expects as many as 20,000 participants per festival.

Wittenberg says sports festivals will place greater emphasis on camaraderie than competition. “Sport doesn’t have to be intimidating, and when it’s not intimidating it connects us with others,” she says.

Thirty years after Wittenberg won the Marine Corps Marathon, she looks fit enough to vie for that title again. Mornings, she runs nearly seven miles to Virgin’s New York office in Greenwich Village. At lunch, she often leads her staff to the gym for an hour-long cycling or boot-camp class. Evenings, if her two teenaged boys can spare her for an hour, she may slip away to a yoga class around the corner from her family’s home.

“Being fit makes a huge difference in your endurance and resilience in the workplace,” says Wittenberg. As Virgin Sport’s top executive, she goes by the title Chief Exercise Officer.

In an interview at her offices, wearing jeans and a Virgin Sport T-shirt, Wittenberg offers a few lessons from her career as an endurance athlete and executive. In particular, she offers a communications lesson that she learned the hard way – when a major hurricane struck New York less than a week before the 2012 marathon. 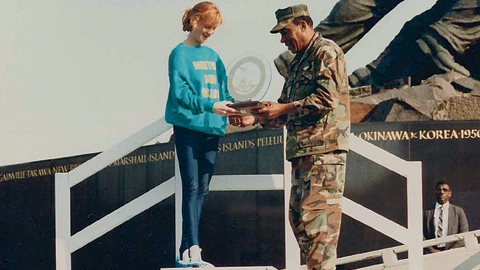 Mary Wittenberg on the winner’s podium at the 1987 Marine Corps Marathon in Arlington, Va., a race she finished in 2 hours and 44 minutes.

Boss be darned: work out!

Arguably it’s in the financial interest of fitness executives to encourage exercise. But there just happens to be a mountain of scientific evidence for the health-enhancing and quality-of-life improving benefits of exercise.

So here’s Wittenberg’s main prescription for endurance: at lunchtime, leave your desk and go to the gym. If you can’t do it at lunch, do it at 3 p.m. If you think there’s too much work facing you to spare the time to exercise, then that’s all the more reason to do it, she says, because physical activity increases one’s efficiency, even if many bosses fail to realize that. “Bad bosses who expect you to sit at your desk all day – that is a hurdle we need to overcome,” she says. “I mean, who can live like that?”

Don’t let yourself be defined by the present moment

As the eldest of seven children in a sports-obsessed Irish-Catholic family in Buffalo, Wittenberg failed as a kid to stand out at sports, including running. She became a cheerleader, but didn’t give up on sports, taking up rowing with some success. Then as a lark, she entered a 5-kilometer run – and won.

It turned out that the cardiovascular benefits of rowing had unmasked her potential as a runner. From that followed the glory of winning a major marathon, and a long career in charge of the world’s largest marathon. None of that would have happened if, as a non-competitive child, she’d given up on her athletic ability. “It’s never about any one moment,” she says.

Using a basketball analogy, she says, “You may sink a three, and one second later it doesn’t matter. When Steph Curry misses a three, he’s still Steph Curry. You go through a rough patch, or a period of confusion, and you’ve just got to keep going.”

“It’s never about any one moment… You go through a rough patch, or a period of confusion, and you’ve just got to keep going”

Know when to pause

Watching the Academy Awards this year, Wittenberg found herself sympathetic to the now-infamous gaffe by award presenters Warren Beatty and Faye Dunaway. Beatty, supposedly announcing the Oscar for Best Picture, opened the envelope and found that it was the award for Best Actress, which went to Emma Stone of La La Land. On stage in front of a large theater audience and larger live television viewership, Beatty hesitated. Instead of saying, “I don’t think this is right,” he simply showed the wrong card to Dunaway, who mistakenly announced La La Land as the winner.

Wittenberg understands the position they were in – the difficulty and necessity of pausing under pressure long enough to get it right. But pausing doesn’t come naturally to Type-A people like Wittenberg. The whole idea behind endurance athletics is to keep going when your body and mind scream, “Enough!” Sometimes, though, it’s necessary to second-guess both the urge to keep going and the urge to quit – especially when the whole world is watching.

For Wittenberg, that lesson was driven home following the devastation of Hurricane Sandy. The historic storm struck New York only days before the 2012 New York Marathon. The instinctive response of an organization run by and for distance runners was to declare that the race would go on.

After all, that’s how it had been after 9/11. Six weeks after the 2001 terrorist attack devastated New York, the city’s big marathon took place as usual. Because planners and runners would not be cowed, the race that year inspired the entire nation.

In the wake of the hurricane, NYRR and city officials naturally chose the same route and declared the race would go on. But when the full impact of the storm became clear, NYRR had to reverse course. The city resources required to pull off the marathon were needed instead for cleanup and recovery. The race was canceled with only two days’ notice.

Almost five years later, Wittenberg says she still thinks everyday about how she could have handled that differently. “You wonder could we have said, ‘We don’t know if we’re going to go on,’” she says.

That decision would have caused some confusion, particularly for international runners needing to decide, only five days before the marathon, whether to fly to New York. But it might still have been a more appropriate response, she says.

As she puts it, the message for them could have been: “We think we’re going on. But you decide if you’re going to fly over or not.”

Now the Chief Exercise Officer of Virgin Sport, Mary Wittenberg is the former President and Chief Executive Officer of New York Road Runners, where she oversaw the TCS New York City Marathon and several other races, events and programs that draw over 300,000 yearly participants.

An active-lifestyle company in Sir Richard Branson’s global Virgin Group, Virgin Sport creates Festivals of Fitness, community celebrations around athletic events. The UK and US host the first festivals in 2017.

Kevin Helliker is Editor-in-Chief of the Brunswick Review, and a former journalist for The Wall Street Journal.

In the wake of the fall of Kabul, a nonprofit’s focus shifted almost overnight from empowering young women to evacuating them. Brunswick’s Preston Golson reports.