Poppy Jaman is passionate about building a global movement that promotes mental health and well-being in the workplace. Long before COVID-19 made it an inescapable consideration for every company, she was working to raise mental health as a strategic issue on board agendas, from her position as CEO of the City Mental Health Alliance. Although based in London, CMHA is a global organization in eight countries with plans for further expansion.

As a young mother, prior to entering the mental health field, Jaman had her own struggles with mental health. That personal experience has helped power her career in this space for over 20 years. She saw firsthand how a good job and working environment can support mental well-being and fill lives with a sense of purpose and accomplishment. Her resolve to lean into this issue was only strengthened by the financial crisis and the global pandemic, periods that saw many people struggling with their mental health and forced businesses to face into the challenge. 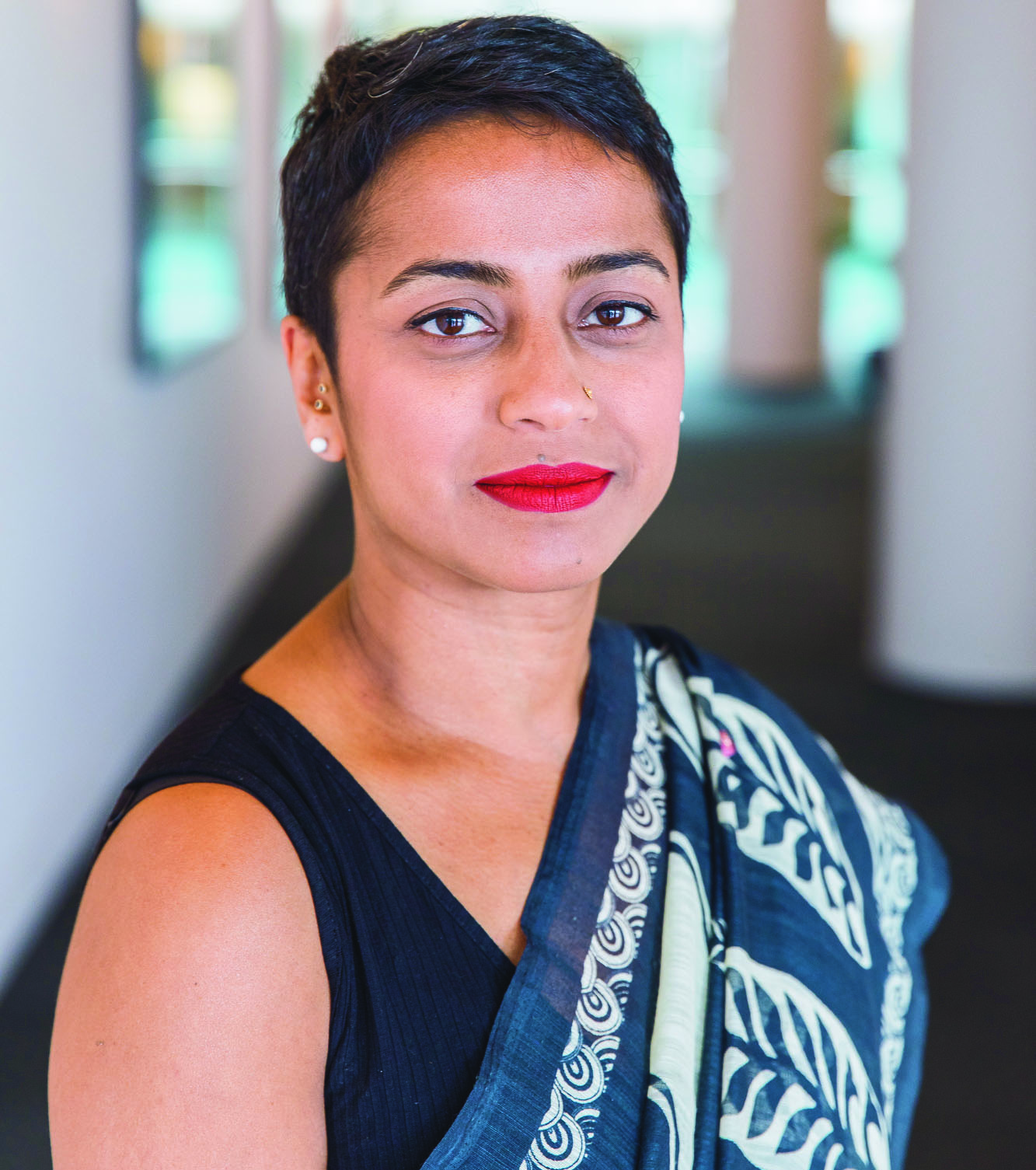 “I have a North Star,” she says. “I want to create a world where my children never contemplate suicide as an option. That’s what drives me. I know what I’ve been through, and I know so many people that have lost people to suicide.”

Brunswick’s Ann-Kathrin Richter spoke with Jaman about the status of mental health in corporate life today, her work at the head of the CMHA and the organization’s plans for the future. There is much that business leaders can do, by challenging themselves and their people to reimagine their business as a space for health creation.

What sets the City Mental Health Alliance apart in the ecosystem around mental health?
We are a dynamic, purpose-driven social enterprise and a membership organization. We are probably one of the only organizations in the world that can have a compassionate dialogue on mental health and well-being with business leaders as well as civil society and government. We sit at the center of that Venn diagram, as a translator and an interpreting service for businesses. Businesses trust us, and governments and academics come to speak to us about leveraging the changes that business can drive on the issue. I see us as an anchor organization in the ecosystem.

How does CMHA create change?
We’re business-led, expert-guided. We’re not clinicians telling businesses what they should be doing. We are not trying to sell them the next silver bullet, because there isn’t one. Our starting point is business leaders recognizing mental health and well-being as a business issue that they need to act on.

There are three elements to how we create change. One is storytelling, that’s our signature element. Back when we started there wasn’t anything like this out there. We create safe spaces for storytellers, including our first board members. Michael Cole-Fontayn told the tragic story of losing his wife to depression and becoming a single parent. He was at the time the Chairman of BNY Mellon. Brian Heyworth told his story of a breakdown and then being employed by HSBC. He’s now our Chair. And John Binns, then Partner at Deloitte, told of a breakdown and recovery. So, you have three men—a banker, a lawyer and a management consultant—at the peak of their careers, talking about their mental health. That was significant because people weren’t talking about their stories. It all began with storytelling.

The third element is peer learning for well-being leads—people in HR, Diversity & Inclusion, and now increasingly dedicated Well-being leads. We facilitate them getting where they need to get to.

What do members find most valuable about being part of CMHA?
I think the first thing they’d say is that they love being part of the community—networking and learning from each other. This is the one place they come together on the issue and there’s no competition. Discussing what didn’t work in their experience is particularly important, so that businesses don’t have to repeat each other’s mistakes. We run seminars, information exchange sessions and roundtables supported by experts to facilitate this sharing.

The second thing is our evidence-based Thriving at Work Assessment, which provides each organization with an individualized report they then use to build their mental health and well-being strategy, and chart their progress against. Helpfully, they can also benchmark themselves against their industry peers. We award badges according to performance. The first rung is “committed” and the top is “health creating.”

Our vision today is to inspire health creation. That is a huge leap from where we began a decade ago.

And how did you enter the story of the Alliance?
My own recovery from mental health struggles was because of a good job. Having a job that gave me purpose, financial security and an identity that was not my diagnosis.

I genuinely believe that work feeds us. I was suicidal. I was hanging on by a thread. This job was an incredibly healing part of my journey. It gave me a purpose to get out of bed. People valued me. I was able to test my talents. I was always a good communicator. So, all of these things that developed were about me as a human being and building resilience and building capacity and capability—that’s what good work is about, isn’t it?

The idea for the Alliance arose later, in 2011. I was running Mental Health First Aid, and my personal vision was to make workplace mental health “a thing.” Linklaters was rolling out mental health first aid in part of their organization as an experiment and I invited Nigel Jones, who was responsible at the board level for their health and well-being strategy, to speak at an event at the House of Lords to showcase their work.

At the end of that meeting, Nigel approached me to tell me that this conversation had been brewing in the City for some time now and whether something could be done about it? I got involved pulling the right people together.

Initially however, we only had three founding members; there were several potential members that wouldn’t go live or put their name to it until we had a bigger group. And that speaks to the stigma that was there. No company wanted to stand out doing this thing called “mental health”—they expected repercussions for the business. There was a real worry that it would damage your brand. But by 2012 we had gotten together 10 founding members and 10 years later we have 65 global members and are almost in eight countries, so that’s exciting.

How would it look if 100% of people could get early intervention through work? How much would this contribute to the prevention agenda and the well-being agenda? It would take the burden off the health services, as well as business, because it would mean fewer people taking time off sick longer term. So, if you could get this right in the workplace, you’d actually have a big impact on the wider ecosystem.

When you first set out launching the CMHA what was the thing you were hoping to achieve? How does that compare with now?
In my gut, I knew we could create a global business-led organization that takes this issue seriously, and that if we did that, we would create magic. Our vision today is to inspire health creation. That is a huge leap from where we began a decade ago. Now we’re going: How can jobs be designed to create health?

Create a Culture of Well-being and Psychological Safety

Provide and Signpost to Accessible Resources, Tools and Support

CMHA frames its goals for organizations around three strategic principles or “Pillars” for mentally healthy workplaces. These align with the CMHA Global Thriving at Work Framework. The Pillars are themselves supported by a list of standards that organizations are expected to strive toward.

What’s happening next, what are the big agenda items for the Alliance looking ahead?
There are two big things on my radar: We need to think about metrics on mental health and well-being; and we need to take our work global.

We have seen the conversation around the “S” in ESG gather momentum over the past couple of years—how to pin it down and measure it. Mental health and well-being need to be at the heart of corporate governance and one way to do this is by getting businesses to report and measure progress—investors should demand progress from business. It would mean reporting on psychological health and safety, as we already look at physical health and safety. This can help businesses create social value where workplaces offer early intervention through education, resources, assistance services that are culturally accessible. After working with our members for 10 years, we can bring together what we have learned collectively and use it to create an ESG frame.

That said, we also need greater clarity on what works and for whom, and what doesn’t. Businesses have a critical role to play in that too. So, going forward I want to form partnerships with academic institutions and with business. The employee assistance program, for example: Who does it work for? Who doesn’t it work for? We need to build the evidence around this to make scaling up effective. Bringing more academic rigor to what we know so far is important now.

As you go global, do you think it is possible to accelerate what took a decade in the UK?
Most of the businesses that we work with are global and they increasingly must think about mental health and well-being as a global issue. So, we have chapters in the UK, Australia, Hong Kong and Singapore and we are now developing new chapters to extend our reach globally.

When we started conversations in Portugal, for example—and we’re also having early conversations in Russia—it was exactly the same conversations as 10 years ago: We’re talking about “mental illness.” Can we accelerate that conversation? I hope so. Let’s get the storytelling going and draw on collective experience. We’ll get from “awareness raising” to “health creation” in three years and if we have data on what works to back it, we could be even quicker.

Tell me a bit more about how you think about businesses as “health creators”?
We are facing a global challenge where we are looking at burnout and depression, but then there is also this state called “languishing” where you’re not full of energy and also not hopeless. You’re sort of in the middle. I think quite a lot of us are in that state today because we’ve gone through this horrendous experience with the global pandemic.

So how do we make sure that the people who are languishing don’t move into burnout or hopelessness? How do we prevent that? It’s time to talk about mental illness and about how we promote well-being so we can capture the people affected in the middle. The businesses that are starting to be “health creating” are those that recognize mental health and well-being as of strategic importance for the business.

Ann-Kathrin Richter is a Director for the Business & Society practice at Brunswick, based in London.

The Business of Equity

Diversity, equity and inclusion must be embedded into all the activity of an organization. Brunswick’s Deepali Bagati speaks with Deloitte Global Inclusion Leader Emma Codd.