Two separate reports by the Association of Corporate Counsel, a professional organization of more than 40,000 lawyers in 85 countries, reveal that in-house counsel around the world are wrestling with similar challenges.

Increasingly, they are working on cross-border issues, struggling to stay abreast of a constantly changing regulatory landscape and the implications these changes have on risk management, intellectual property, and mergers and acquisitions. A majority of lawyers reported that complying with privacy and corruption laws, both inside and outside their jurisdictions, is especially challenging.

As is true for leaders in the boardroom and the C-suite, data protection and cybersecurity are high on the radar of senior legal counsel. A growing number of chief legal officers (CLOs) and general counsel expect to expand their roles to manage this risk. These senior lawyers also cited constraints relating to budget and headcount as obstacles weighing on their minds.

Asked to manage a growing volume of increasingly complex tasks, corporate lawyers are keeping pace the old-fashioned way: taking on more work themselves while also working long hours. Almost half (49 percent) of in-house counsel polled by ACC reported an increased workload over the past 12 months.

Companies with an annual revenue of $3 billion or more are likely to be targeted by a regulator; CLOs in Europe, the Middle East and Africa were most likely to report their companies faced regulatory scrutiny 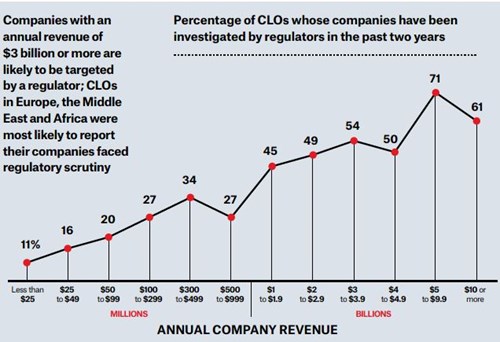 The challenge of compliance

Privacy was the most widely cited issue facing in-house counsel within their jurisdiction – it was the top concern for five out of the eight regions polled. Corruption also featured prominently. Forty-one percent of respondents from the Asia Pacific region felt complying with local corruption laws was a serious challenge, as compared with only 4 percent in the US and 8 percent in Canada 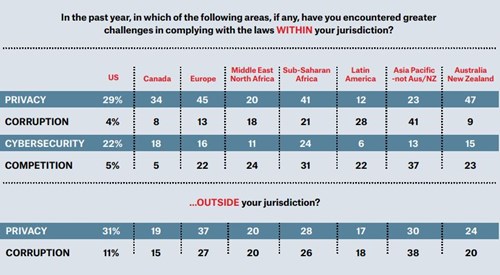 Having cross-border responsibilities is becoming the norm for in-house counsel. Europe topped the list, with 86 percent of respondents reporting their roles involved multinational activity 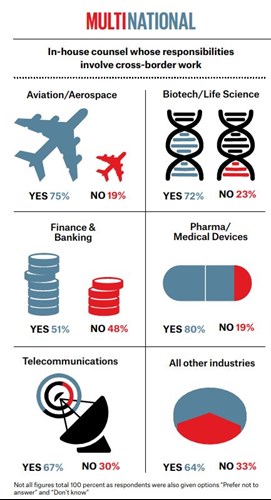 The stuff of nightmares

57% of CLOs/general counsel expect their work in cybersecruity to increase, while only 7 percent are very confident their companies' data is secure

One of the fastest rising concerns among senior legal leaders is data security. The healthcare industry remained the most heavily affected, with 49 percent of healthcare CLOs reporting a breach within the last two years. CLOs were less concerned about M&A and corporate litigation than they were a year ago 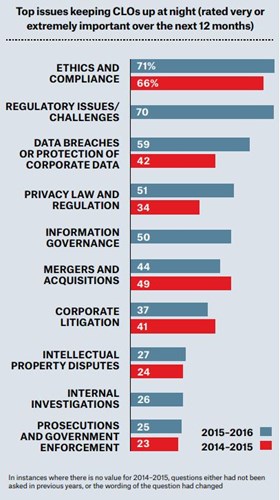 The total value of global M&A deals in 2015 was the highest on record. Globally, 40 percent of in-house counsel worked at a company that experienced a merger or acquisition in the past year 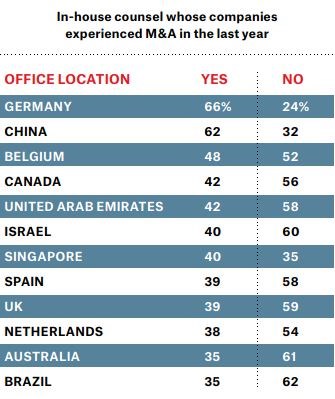 The largest global community of in-house counsel, the Association of Corporate Counsel works to promote the professional and business interests of in-house lawyers working across the private sector. This research is drawn from two separate ACC reports: the ACC Chief Legal Officer 2016 Survey, which polled more than 1,300 Chief Legal Officers and General Counsel in 41 countries; and the 2015 ACC Global Census, in which more than 5,000 in-house counsel from 73 countries participated.

New UK regulation and standards call for solicitors and directors to act with integrity—but we’re not quite sure of what that legally means. Sarah de Gay, General Counsel at law firm Slaughter and May, suggests a way forward.