In 2008, Miguel McKelvey and Adam Neumann co-founded Green Desk, a company that retrofitted and parceled out empty office space to small-scale entrepreneurs and freelancers. Their first location, in Brooklyn, filled quickly and they saw the demand for what they were offering – not just space, but also services that members would
no longer have to pay for on their own, along with a network of fellow members. They wanted to go bigger, so they sold Green Desk and used those funds to open WeWork, a company with a similar business model but greater emphasis on scale, community, and both the power and appeal of collaboration.

Their vision has resonated far beyond Brooklyn. By the end of 2017, WeWork will have more than 200 buildings in over 50 cities, across five continents, and it’s aiming for a million members by 2020. Its members increasingly include not just startups but also mid-sized enterprises and major global corporations such as IBM, Amazon and Ford.

WeWork is also advising companies on office redesigns and collecting troves of user-based data that give a fascinating picture of how people work in this day and age – how much space and how many desks they need, what technology they use, how they interact with each other, and more.

Over the past year, the company secured a $4.4 billion investment from SoftBank Group and the SoftBank Vision Fund, of which $1.4 billion will fund WeWork’s expansion in China, Japan, Southeast Asia and Korea.

McKelvey, a trained architect who had been overseeing all of WeWork’s design and building efforts, recently assumed the title of Chief Culture Officer. He’s now working to determine how the company can best support its own people, so they can “create their life’s work.”

That means building engagement into everything WeWork does. It means making people feel like part of the culture from day one. It means letting people know his door is open if they want to talk about the workplace, their salary, or their hopes for personal and professional development. And it means finding new ways to offer rewards and incentives that are both linked to the larger WeWork ethos but also individualized –“hyper-personalized,” in McKelvey’s words – to demonstrate that the company recognizes employees’ contributions and their willingness to go along for the ride. Below, McKelvey talks to Brunswick about WeWork’s “hyper-personalized” approach and the culture that underpins it.

As we’ve expanded, we’ve seen that our culture isn’t an outcome of our success; it’s fueled it, at every stage. Maintaining our culture, living our values, being authentic about it all – that really matters to us. We have to be consistent in what we say and ambitious about how we pursue it. And we have to build that into our relationships and our engagement with our own people, too, whether they have been with us for a long time or just started last week.

We start by connecting people through the design of the workplace, the space we share, because the space is essential to people’s everyday experience. It’s an expression and a facilitator of the overall culture. It helps us create a positive energy, an atmosphere that encourages people to feel part of a community, something larger than themselves. That helps them feel like they’re being supported in their effort to create their life’s work, and feel like they are progressing on that journey every day.

It’s in the design of our stools and chairs, the lighting, the width of the hallways, the conference rooms, even the coffee we serve – everything you see, and some things you don’t see, when you walk into the office. This goes for our members, too, and it’s an ongoing process because we want to understand how people are using the space – are there small groups of people who want a quieter work space, for example? – and how we should respond to that.

In terms of how we reward people: we look at salaries and titles and those elements of the work experience. But we’re going beyond that, asking how we can find ways that are meaningful to them, as individuals, to show we appreciate what they’re doing and the contributions they’re making. What gesture from us or a manager or a colleague will make their day better, open up new possibilities, or remove an obstacle that’s preventing them from doing their best, most fulfilling, most productive work?

We want a hyper-personalized process, based on personal relationships with our team members. Can we help someone get their MBA, if that helps them, and in turn helps us? If they move out of the city but then need a car, can we help with that? Maybe they’re music fans, and really want to go to Coachella or some concert; we can get them tickets to show that we see the great work they’ve been doing. Or maybe they had a child recently and an Amazon gift card could help cover costs for diapers or blankets or whatever else they might need.

These are all things we’ve done. We’ve also sent groups on trips to places like Australia and Mexico, trips that don’t count against vacation days and give them the opportunity to get to know another place, another culture, to break down silos between people from different departments and give them a chance to see things that might refresh and inspire them, that they might bring back here.

We’re also expanding our wellness programs, because being healthy and feeling energized is a huge part of being productive. As we build out our HQ, we’re improving the facilities so people can have access to fitness classes, yoga and other programs. We’re tracking how people use them as well. That helps us make improvements and it helps us see how we can best package these services into a product we can offer members, for themselves and their employees. That’s one of the cool things about our growth: as we become bigger and we work through our own increasingly complex challenges, we become more qualified to create solutions for other companies with similar challenges. 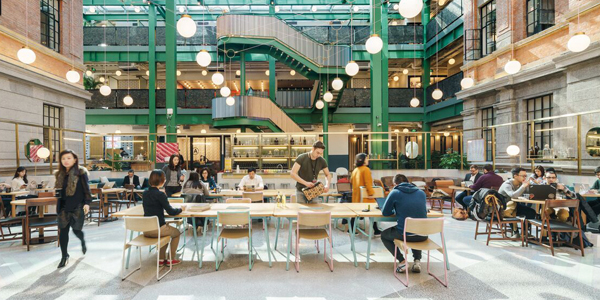 A WeWork building in the Jing’an district, Shanghai’s central business area. According to the company, the building used to be a
“historic London-style mansion” that housed artists and galleries. Rumors are the building was also once an opium factory, and a warehouse for the infamous East India Company. Today, renting a private, one-seat office costs 3,790 yuan ($570) per month. In addition to the building’s amenities, complimentary coffee, tea and beer on tap are included.

Measuring the outcomes of all this, the engagement it leads to, is a challenge. We’re working on that. But if we can grow this personalized rewards approach, that should point us in the right direction.

We get input from our people from the outset. At our summer camps – our version of the corporate retreat, which we had in August – we ask, what would you want as a “small thank you,” a “meaningful gesture,” or “high impact gratitude”? We received a range of answers: a small thank you would be a “free Friday” out of the office; a high-impact gratitude might be a trip to the flagship TED Conference. People also told us what personal experiences they’d like to have. When we awarded bonuses, we offered people the option: cash, or pay for that personal experience. Ninety-eight percent chose the personal experience. We’re still developing more systematic applications of this hyper-personalized idea.

The trick is keeping it personal as we continue to grow. We’ve got more than 3,000 people now, across the world, and that number is going up. We’re in China, Japan, India, and southeast Asia, in cities across Latin America, Europe and America.

While our people team is going out and finding people who fit this place, my job with the culture team is to make sure the place fits them, too

We have an India team, for example, that I spent time with at our summer camp. They’re passionate, just awesome, and they feel aligned with the mission and excited to get on with things. I need them to know it’s not going to be another year, at the next summer camp, before we spend time together again. But I also don’t know when I’ll get to India again, or when I’ll get to our other offices. So I’m thinking about how to replicate that personal engagement with all our people, globally, whether it’s communicating digitally and trying to give it some of the same feel, or continuing to build out our team and finding regional culture representatives who can do the same kind of thing, and who can help us determine if there are differences in the various locations that could or should impact how we design rewards and recognition for our people there.

Best case, we would have done this before, built a process and had it in place before we opened these other locations. Then we would be scaling them. But we didn’t. And I know we still work a lot by intuition and we need to be more systematic. We have data scientists on our people team now. It’s not like we’re going to say, “Oh well, we missed the boat, it’s too big, let’s not bother.” We’re not going to stop growing, and we know how important this is for employee engagement, for our culture and our company’s future. So we are going to pursue it with the same rigor that we use to build out our locations. We’re at the forefront of innovation when it comes to designing and shaping hundreds of thousands of square feet around the world – we’re going to apply that same approach in our systems, operating methodology, and in our ambition for our people.

We’ve always had extraordinary ambition, and been willing to ask more of ourselves than a rational person might think is possible. It applies to how we approach our people, too. So even though there are challenges to doing this the way we are doing it, we’ll keep pursuing our ambitions, coming in every day and doing the best we can to make it happen.

Part of my job now is making sure we’re doing everything we can to build and maintain that, to encourage, support and inspire our people. While our people team is going out and finding people who fit this place, my job with the culture team is to make sure the place fits them, too, and supports them, so they stay motivated and engaged, so they do their best work, so we all grow together. Because it’s our people who have gotten us this far. And it’s going to be our people, if we do right by them, who get us where we want to be.

McKelvey spoke with Sarah Lubman, a Partner who specializes in telecom, media and technology, and Phil Zabriskie, a Director in the US Business & Society team. Both are based in New York.

The UAE has created a new government post: the Minister of Happiness

The employment contract as we know it is dying and being replaced with a new style of entrepreneurs, contractors and the gig-economy