I fought the law and I won

As a businesswoman, I have a long history of fighting for achievement in territories typically reserved for men. None of that prepared me for my recent battle with the Securities and Exchange Commission.

In 2015, the SEC sued me for fraud. The accusation stung in all sorts of ways, not least because of how I was raised. My three siblings and I grew up in a loving home committed to hard work and appreciation. We were taught that we are best defined by how we touch the lives of others. We call this “our father’s values.” My siblings all made public service their lives’ work.

My parents are first-generation Americans; their parents, Russian immigrants. I was raised in the Bronx, then Teaneck, New Jersey, where I played competitive tennis, achieving national recognition before attending Yale University, where I played on the varsity team.

During my sophomore year in college, my father was diagnosed with brain cancer and died. Feeling the need to care for my mother and younger brother, I married during my junior year and upon graduation headed to a coveted analyst role at Morgan Stanley.

I hadn’t planned a career in business. But what is by design temporary becomes permanent by necessity. By 23, I was the single mother of a beautiful daughter, working 100-hour weeks in Mergers & Acquisitions. During the next decade, as an investment banker at Goldman Sachs, Merrill Lynch and Kidder Peabody, I scrambled in fear to meet the relentless demands of male-dominated Wall Street while fulfilling my responsibilities as a mother.

In 2000, I realized that I could combine my Wall Street experience with my “father’s values.” Back when he passed, I learned first hand the devastation that a working parent’s death wreaks upon a family. Now I decided to dedicate my life’s work to saving other families from what mine had experienced. The “dignity of work” became my passion, drive and mission. I set out to design a business model where value would be built for investors while improving life for workers. Patriarch Partners, named to honor my father’s values, was born.

I invented a patented financial model that allowed Patriarch to raise funds to buy deeply distressed companies. Once we acquired them, we worked tirelessly to restructure and reignite them, attempting to save jobs and build value. Over 17 years, we have restructured 243 companies, saving 700,000 jobs. Of this, I am most proud. 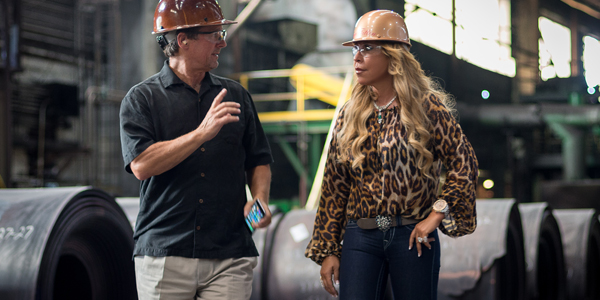 Tilton’s Patriarch Partners seeks to restructure and rescue distressed American manufacturing companies. Her companies include MD Helicopters, a maker of commercial and military helicopters. She serves as its Chairman and Chief Executive Officer. She says saved jobs are the true measure of success.

After the financial crisis, when the government bailed out Wall Street banks and large companies but not small or mid-sized manufacturing companies, I spoke out loudly and wrote boldly. I feared that creating a populace of the permanently unemployed would lead to violence on the streets of America.

In December 2009, the SEC began an informal investigation of my business. I cooperated fully, certain that all would be fine once the agency understood the sui generis nature of my funds and the nuances of distressed private equity. But the SEC claimed to find evidence of fraud and offered me a settlement. Because I had complete confidence in the integrity of my business practices, I refused to settle, and the SEC officially sued me for fraud. I now understand why no one on Wall Street fights the SEC. The allegations cast a shadow so large it was nearly impossible to manage my business. When banks went to the sidelines, worried about reputation risk, I alone provided the funding to my operating companies, maintaining as many as I could during this fight. During a 14-day trial, I spent four days as a witness, fighting to protect my companies and employees.

On September 27, I won. An SEC in-house judge threw out the so-called case against me. While many observers had bought into the SEC’s unproven narrative, my employees never lost faith or abandoned me. So this victory and vindication is not only for me but for my employees, all tens of thousands of them.

Coming out as Transgender in Corporate America

Turning Down the Volume on Fear

Dr. Pippa Grange has helped football stars calm their nerves before penalty kicks and coached CEOs to succeed in ways that aren’t soul-destroying. She talks with the Brunswick Review about finding purpose and managing fear.