The legacy of the Powell Memorandum | Brunswick
Litigation

The legacy of the Powell Memorandum

Two months before he was nominated to the US Supreme Court in 1971, Lewis F. Powell Jr wrote a confidential memo to the US Chamber of Commerce that ultimately changed the course of business litigation for decades. Then a Partner at law firm Hunton & Williams, Powell encouraged a sweeping advocacy campaign in defense of capitalism’s reputation – a call being sounded again today with equal urgency.

The Powell Memorandum, as it became known, is an example of sharp legal thinking applied to a complex public relations challenge. In the stormy Vietnam War era, American opinion of business had soured, driven in part by left-leaning politicians, but also, more troubling to Powell, by mainstream media and thinkers. The solutions he identified were simple: weighing in on important court cases through friend-of-the-court briefs and working to achieve equal air time for pro-business messages in the media and in schools. But what these steps required was not so simple: a coordinated effort on a large scale by leaders at the highest levels of corporations of all sizes.

In the years after the Memorandum, the advocacy of individual companies and interest groups such as the Chamber became much more sophisticated. Powell’s prodding helped fuel the tort reform movement. Over many years, a coalition that included the Chamber’s Institute for Legal Reform, the American Tort Reform Association and many individual companies applied consistent pressure to legislatures, regulators and courts to successfully stem the tide of class action lawsuits, curb massive damages awards and raise the bar for tort filings. These efforts have undeniably gained businesses a degree of protection from frivolous (and sometimes not so frivolous) litigation.

Where they have been less successful is in addressing the perception problem. As American businesses face an increasingly skeptical public, they must find an effective way to defend the philosophy underpinning Powell’s memo – a fervent belief in the ability of business as a force for good in society.

Almost six years after his appointment to the US Supreme Court, Lewis F. Powell Jr posed with the eight other justices for what is considered to be the first-ever informal portrait of the entire court. The photograph appeared in the January 1977 issue of Smithsonian Magazine. 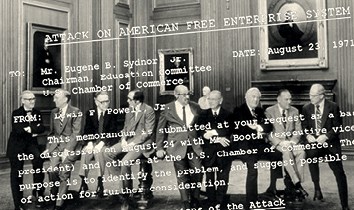 Emma Schultz is a Director in Brunswick’s Washington, DC office, advising on crisis and litigation.