When Singapore announced its independence on August 9, 1965, there was considerable doubt the former British colony would survive. It had no natural resources, no army, and internal unrest was a serious problem: More than 20 people had been killed in the city’s streets during race riots a year earlier. Two regional neighbors, Malaysia and Indonesia, were fighting an undeclared war, while another, Vietnam, was at war with the US. Singapore lacked land to grow its own food, it had nothing to export, and it even depended on nearby Malaysia for water. So many countries in Southeast Asia were crippled by corruption, poverty and dependence on foreign aid that a similar fate seemed almost geographically ordained for the tiny, new state.

Yet Singapore went from having roughly the same GDP per capita as Ghana (around US$500) to a higher GDP per capita than Sweden within two generations. It now ranks second on the World Bank’s ease of doing business scale behind New Zealand, boasts a near 100-percent literacy rate, and has an average life expectancy among the world’s highest. Its development has been called an “economic miracle,” and policymakers and politicians around the world invoke Singapore’s ability to defy the odds in rallying support for causes ranging from Brexit to replacing Obamacare.

The man behind the miracle was Lee Kuan Yew, Singapore’s “Founding Father” and Prime Minister for three decades. He would shape every aspect of the country’s development, from the way it was governed to how its economy ran, and in 1965, Mr. Lee needed to decide what Singapore’s national language was going to be.

At the time, Singapore’s population was around 75 percent ethnic Chinese, 15 percent Malay, and 8 percent Indian – proportions that still hold true today. Not surprisingly, the Chinese Chamber of Commerce urged Prime Minister Lee to make Chinese the national and official language.

In a 2004 speech, Mr. Lee recalled his response: “You must be mad, and I don’t want to hear any more of that from you.” He went on to explain his reaction. “Could we make a living with Chinese as our language of government and our national language? Who is going to trade with us? ... How do we get access to knowledge?” Such a response sounds odd today given China’s economic might, but in 1965 the average income in China was barely $100, adjusted for inflation. (Beginning in the late ’70s, China has enjoyed a “miracle” of its own: Its population has doubled, yet its average income now exceeds $8,200.)

Mr. Lee also made Mandarin Chinese, Malay and Tamil official national languages, putting all three – and the people who spoke them – on equal footing. “If we have only English and we allowed the other languages to atrophy and vanish, we face a very serious problem of identity and culture,” he wrote. “What would have happened to Singapore? Where would the Malays be, and the Indians, what future would they have? … The country would fall apart.” 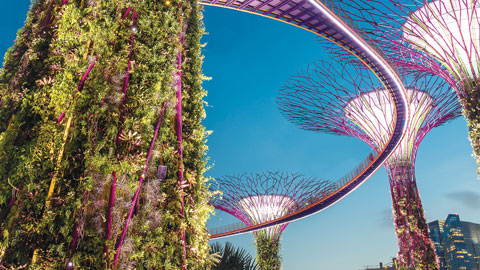 Since 1965, Singapore has grown by more than 50 square miles – "reclaiming" land by adding sand and soil to water. Gardens by the Bay, which features 18 man-made "supertrees," sits on some of this reclaimed land.

Mr. Lee gradually translated that decision into policy. His main focus was education. “However contrary to the concept of a homogeneous society, each racial group would learn his mother tongue as a second language.” In other words, all school lessons would be in English, except one class where students studied their “mother tongue.” This is how schools still operate today, though some teach multiple classes in these native languages. Students and families choose what their “mother tongue” will be.

The legislation of language persists in smaller ways, too. By law, Singapore’s national anthem, Majulah Singapura (“Onward Singapore”), can only be sung in Malay, though there are government-approved translations.

Such policies faced criticism. Some argued that those who spoke English at home had an unfair advantage at schools and in the public sector – the country’s largest employer for many years. A former colleague of mine, who is Singaporean, described it as a “kind of class system based on language.”

But Mr. Lee made no apologies for his choice. In 2011, more than 45 years after Singapore’s independence, Mr. Lee published Hard Truths To Keep Singapore Going, in which he restated his arguments for English: “It was the only decision which could have held Singapore together. If we had Chinese as a common language, national language, we would have split this country wide apart.” And in the direct, blunt tone Mr. Lee was known for, he added, “We would be foolish to have Malay or Tamil.”

The Straits Times, Singapore’s largest circulation newspaper, reported recently that English had overtaken Mandarin as “the language spoken most often at home.” Mr. Lee, who passed away in 2015, would likely have been pleased with such news. But, to Mr. Lee’s frustration, English acquired a local flavor as it became widespread: “Singlish,” a popular patois that adds Chinese, Tamil, and Malay influences. “Friday, can?” for example, is a way of asking if a Friday appointment is convenient.

Mr. Lee wasn’t a fan. “Do not popularize Singlish,” he said in 1999, the same year the government launched the still-ongoing “Speak Good English” movement. “We are learning English so that we can understand the world and the world can understand us.” Mr. Lee felt similarly about Mandarin. He wanted it untainted by Hokkien, Teochew, or Cantonese dialects, and had TV and radio announcers trained to speak a standardized Mandarin.

Of course, language wasn’t solely responsible for defusing Singapore’s racial tensions, nor for setting it on a path of economic success. Mr. Lee also oversaw tough policies on corruption, better public housing (which also forced all races to live side by side) and infrastructure, low taxation, and investments in education and healthcare for all sectors of society. Singapore’s location on the Malacca Strait, responsible for as much as 40 percent of the world’s maritime trade, certainly helped too.

Nor are the lessons from Singapore’s decision on language applicable to countries with vastly different economies, histories and cultures. The US has no official language (though a majority of states have passed laws naming English as theirs), while South Africa has 11, and its national anthem contains five of them. India’s constitution recognizes 22 languages, though Parliament is conducted in either Hindi or English. Canada has decreed French and English as national languages. Language almost everywhere has powerful political, cultural, and economic implications that cannot be ignored or swept aside.

But choosing English as the language of business and government for Singapore, at a fragile moment for a new nation, remains a bold decision that united the country and allowed it to attract vital investment from the West. Instead of Chinese and Malays and Indians being pitted against each other in a sectarian fight for control, the choice of English put them in a roughly equal position. But even Mr. Lee knew that choice would only take national unity so far. “Will we ever become completely homogeneous, a melange of languages and cultures? No,” Mr. Lee said. “Why did we take this route? Because we have no other choice.”

Edward Stephens is Deputy Editor of the Brunswick Review, and based in New York.

Brunswick’s Maria Figueroa Küpçü talks to Professor Tensie Whelan, Director of the Center for Sustainable Business at NYU’s Stern School of Business, about the need to reshape corporate leadership for the future.

Welcome to the second edition of the Brunswick Social Value Review, born of our belief that to be a leading company in today’s world you need to deliver financial value alongside social value.