In Millennials We Trust

Left holding the bag, they will correct the mistakes of their predecessors, says Brunswick’s Jennifer Huffman

Decades of borrowing against future generations and stretching the planet’s resources placed the human race in a precarious position—and that was before COVID-19. Count on us—millennials—to make a difference, partly because we have no choice, and partly because growing evidence suggests that we already are. To the “unluckiest generation”: We’re up!

In typical millennial style, I found myself spending a long time pondering the implications of a particular social media post. You wouldn’t think a friend’s Instagram story of an art exhibition in January would stick with you in June. But I couldn’t get Erik Johannson’s “Demand and Supply” (2017) out of my head. In that digitally created portrait, Johannson vividly captured the overdeveloped state of our planet: a city left precariously balanced on a spindly column of earth, the rest of its island home eaten away by the city’s mining.

We have built a world of luxury the Earth cannot afford. We are accelerating our massive credit card debt that paid for these decisions, yet somehow, the bill is never due, and our spending limit increases. No wonder the Edelman Trust Barometer finds that 56 percent of people believe capitalism does more harm than good. No wonder there is a large trust deficit in our institutions.

As if the picture were not already grim, in walks COVID-19. The pandemic shook up the status quo. However, it also created room for societal debates to take on a new urgency. People are trapped working from home, fearing potential unemployment or already working reduced hours, uncertain of what the future might bring, besides more drudgery.

Yet despite the strains of homeschooling and the binge-inducing call of Netflix, this moment has created more space for reflection than our hyper-distracted, smartphone-driven world normally allows.

Many of us are asking uncomfortable questions. Clearly we can live on much less. Why do we consume so much? Minority communities, already beset by below-average health, are disproportionately impacted by COVID-19. How does that reflect a just society? Supply chain workers are choosing between risking COVID-19 exposure or starvation. How can the West in good conscience subsist off the global poor? It is as though, for the first time, COVID-19 has many of us seeing Johannson’s picture clearly.

These questions aren’t new. But in this moment, they feel new. They have gained a critical relevance.

According to a Brunswick survey, 71 percent of British citizens believe companies become involved in societal and environmental movements for the sake of appearances.

Who will take the lead in answering them? Millennials should. Despite being what the Washington Post calls the “unluckiest generation,” a generation that the Atlantic says “doesn’t stand a chance,” we should push to spare future generations our experience. Yes, I am asking the worst-off generation to become the business leaders we need.

If we are going to use the crisis to acknowledge and embrace these questions, then “greenwashing” and “purpose-washing”—terms dismissing corporate sustainability efforts as all bark and no bite—must stop. According to a Brunswick survey, 71 percent of British citizens believe companies become involved in societal and environmental movements for the sake of appearances.

One reason for perceived “purpose-washing” is that business leadership has not put action behind mission and purpose statements. A Harvard Business Review survey found that executives believe a company’s purpose brings both internal and external benefits: 89 percent feel purpose drives employee satisfaction, 84 percent said it impacts a company’s ability to transform, and 80 percent say it increases customer loyalty. Despite this, only 46 percent of executives say their company has a strong sense of purpose. This gap is eroding society’s trust in business.

Millennials are especially skeptical about the authenticity of business intentions. In Germany, according to a Deloitte Millennials study, millennials’ trust in business’ intentions eroded drastically from 2017 to 2018. That study finds a declining belief among German millennials in the ethics of business and in the commitment of business leaders to societal improvements. German millennials are more skeptical than their peers abroad, though globally, our generation’s view is pessimistic. We shall see if post-COVID-19 studies indicate any positive shift. 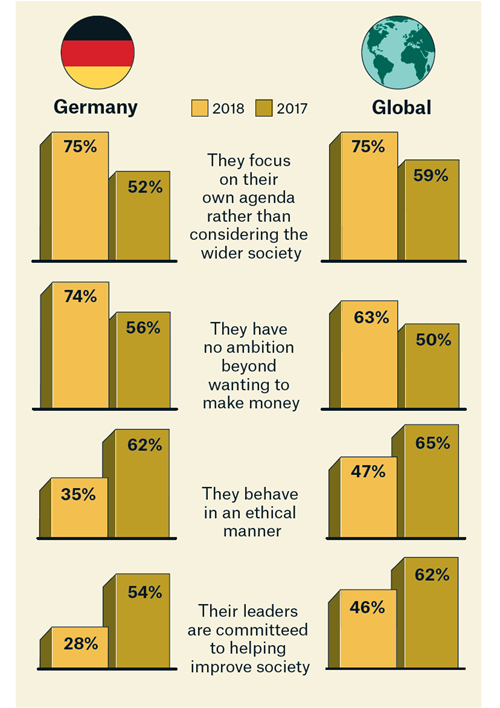 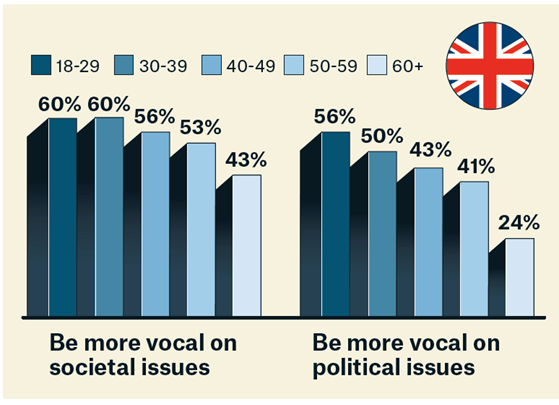 Millennials are not just calling on leaders. They’re becoming leaders. Many already are leaders. The average age of a first-time manager in the US is 30, meaning more than half are moving into leadership roles, says Korn Ferry. Of course, many who have taken non-traditional routes are already CEOs and have started their own businesses. And there are a lot of millennials out there—as of 2020, millennials currently represent 35 percent of the global workforce, the largest portion of any generation.

The composition of millennials will add to their influence. Millennials represent important societal issues they wish their leaders would support, particularly in terms of diversity and inclusion. Using the American example, 72 percent of millennial women are employed. When other generations were the same age (around 22-37), a lower proportion of women were employed (though GenX was not far behind at 71 percent). Broadly, American millennials are the most diverse adult generation in US history, with 44 percent of them belonging to a minority group. Fifty percent of this cohort also believes gender falls on a spectrum, rather than being binary.

These factors help explain why the CEO of the future will look different—and perform in a different way. According to an American Express survey, 70 percent of American millennials say that “the CEO role will no longer be relevant in its current format.” That suggests a greater sharing of power. In the same survey, 81 percent say that “a successful business will have a genuine purpose that resonates with people.” In other words, make purpose authentic. Eliminate greenwashing.

As of 2020, millennials currently represent 35 percent of the global workforce, the largest portion of any generation.

Millennials will be the ones to put words into action. Their experiences and accomplishments already prove as much.

They donate: Despite being the worst-off generation financially, in 2011 (yes, deep into the financial crisis), 63 percent of millennials donated to three or more nonprofits, according to the Millennial Impact Report.

They continuously self-educate: During the pandemic, 38 percent of millennials and 40 percent of GenZ have used the time to concentrate on personal development (compared to the average of 29 percent), a Kantar study found.

They are used to a precarious world: In 2008, US millennials were graduating during a recession, and absorbed much of the country’s earnings losses. Younger Europeans were disproportionately affected by high unemployment and part-time work. And COVID-19 has set millennials back further, representing the highest portion of the unemployed in the US, according to the Washington Post.

Millennials are ready to change the world for the better. We’re willing and able to live with less. In our view, struggling minority groups aren’t the distant other; they are us, our friends, colleagues, and partners. We know that putting ethics ahead of profit is not just the right thing to do; it’s good for business. We accept that our planet is doomed unless we act.

As members of a generation dealt a difficult hand, we have no choice. Each of us bears some capacity to lead. On the front lines and in the C-suite, we must be the change we wish to see. Let’s use this extraordinary moment between Zoom meetings and Netflix binges to “build back better” what previous generations left us. Let’s stop excavating the earth underneath us and start planting seeds. We can, and will, deliver.

Jennifer Huffman is an Associate with Brunswick in Frankfurt, specializing in M&A, crisis and sustainability. She previously worked in the US Congress, US State Department and the German Parliament.

Brunswick analysis offers four data-driven scenarios of how we might return to work—and ways companies can start preparing for each.