The celebrated author, academic and feminist speaks with the Brunswick Review

As one of western literature’s oldest surviving stories, The Odyssey boasts a number of firsts. It offers the first example of literary sarcasm as well as the first mentor – in the form of a character actually called Mentor. According to Mary Beard, the epic poem has another “first” to its credit: the first written record of a man telling a woman to shut up.

The woman being silenced is Penelope, a wife grieving for her missing husband. The man telling Penelope to “go to thy chamber and mind thy own housewiferies” is Telemachus, her son. Why does an exchange composed nearly 3,000 years ago matter today? Because, as Ms. Beard writes in her best-selling Women and Power: A Manifesto, “When it comes to silencing women, Western culture has had thousands of years of practice.”

To make that case – and Ms. Beard does, forcefully – she mines mythology and history, and examines a cast of characters ranging from Aristotle to Angela Merkel, Medusa to Margaret Thatcher. Ms. Beard’s writing has the dexterity and confidence that comes with being, as she’s often described, the world’s greatest living classicist. A professor at Cambridge, she makes regular appearances on talk shows in the UK, her op-eds appear in major newspapers, and she has presented documentaries on the BBC. An increasingly popular T-shirt reads: “When I grow up I want to be Mary Beard.”

Ms. Beard’s following stems not only from what she says, but also how she says it – an academic rigor combined with a refreshingly un-academic tone. In a recent interview with The Guardian, she equated the uncertainty around the UK referendum vote with “wanking in the dark.” In a 2018 blog titled “Why Classics Matter,” Ms. Beard described members of the Alt-Right as “spotty adolescents angrily typing out bile after their Mums have gone to bed.” The aforementioned Telemachus is a “wet-behind-the-ears lad.”

I asked Ms. Beard recently what she’d say to her readers – or T-shirt wearers – who are inspired by her unapologetic tone and the quality of her writing on the treatment of women, yet feel they can’t speak up without facing personal or professional repercussions. “That’s hard,” Ms. Beard said. “I would say to them that for years I was silent – but not now. The solution is a combination of bravery and the ability to recognize the words you hear yourself speaking as your own.”

Ms. Beard started lecturing at King’s College, London in 1979. Her first best-selling book came 36 years later, and was the 15th one she’d published, SPQR: A History of Ancient Rome. It made both The Wall Street Journal’s and The Economist’s “books of the year” lists, and was one of The New York Times’ 100 notable books of 2015. Her 2008 book on Pompeii led to Ms. Beard’s first appearance on the BBC, presenting a documentary on the ancient Roman city.

In Women and Power, Ms. Beard wrote about the grotesque responses she still receives after appearing on TV: “a load of tweets comparing your genitalia to a variety of unpleasantly rotting vegetables.” A.A. Gill, the deceased TV critic, wrote in 2012 that Ms. Beard was “too ugly for television” and “should be kept away from the cameras altogether.”

Ms. Beard’s response to Mr. Gill appeared in the Daily Mail: “There have always been men like Gill who are frightened of smart women who speak their minds.” She went on: “Maybe it’s precisely because he did not go to university that he never quite learned the rigour of intellectual argument and he thinks that he can pass off insults as wit.”

When responding to tired criticism that focuses on her appearance rather than her ideas, Ms. Beard’s tone can be wonderfully acerbic. But when building a case that women have been silenced and marginalized for millennia, and that the effects of this still linger – more than we might be comfortable to admit – Ms. Beard’s approach is measured and restrained, and resists oversimplifying history or reducing it to a tidy set of simple lessons.

“Western culture does not owe everything to the Greeks and Romans, in speaking or in anything else (thank heavens it doesn’t; none of us would fancy living in a Greco-Roman world),” Ms. Beard argues in Women and Power. But many of our ideas about leadership and the qualities that underpin it “still lie very much in the shadow of the classical world.” And the classical world was unquestionably a masculine one. 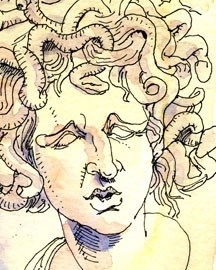 Medusa (above) "was one of the most potent ancient symbols of male mastery over the destructive dangers that the very possibility of female power represented," Ms. Beard writes in Women and Power.

A mythical monster, Medusa's look could turn a person to stone and her hair was a mess of squirming snakes. In some versions of the myth, she is born this way. In others, she was turned into a monster by the goddess Athena, as punishment for being raped by Poseidon in a temple dedicated to the goddess.

Medusa gets decapitated by the male hero Perseus. In most paintings and statues depicting the story, Perseus proudly holds the head aloft.

What does that have to do with today? Ms. Beard recounts how Hillary Clinton's and Angela Merkel's faces have been superimposed on to images of Medusa, with their male political opponents holding the dismembered head in triumph.

Is it really surprising that, with such shadows of the classical world looming, women who wanted to hold positions of power took steps to look and sound less like a woman? “We have no template for what a powerful woman looks like, except that she looks rather like a man,” Ms. Beard argues. That’s why Margaret Thatcher took voice training to lower her voice: “to add the tone of authority that her advisers thought her high pitch lacked.”

Research published last year by Tina Kiefer, a professor at the University of Warwick, suggests Ms. Beard’s not overstating the case. In the study, people were asked to “draw an effective leader.” Regardless of whether a man or woman was asked, the drawn leader was almost always a man. Describing the study to The New York Times, Dr. Kiefer said that even in the small number of drawings that were gender neutral, “the majority of groups present the drawing using language that indicates male (he) rather than neutral or female.”

This highlights another way women are separated from power and leadership: in our daily language. “In every way, the shared metaphors we use of female access to power – ‘knocking on the door,’ ‘storming the citadel,’ ‘smashing the glass ceiling,’ or just giving them a ‘leg up’ – underline female exteriority,” Ms. Beard writes. “Women in power are seen as breaking down barriers, or alternatively as taking something to which they are not quite entitled.”

So what can businesses do? Well, the starting point may be acknowledging that this lingering shadow exists, and that businesses can do something. “We mustn’t think that this is only for political institutions,” Ms. Beard says.

Ms. Beard’s written before – and still believes – that we need to start “thinking about power as an attribute ... not a possession. What I have in mind is the ability to be effective, to make a difference in the world, and the right to be taken seriously, together as much as individually.”

It seems a low hurdle to clear, but it’s one that many governments and businesses still regularly fail to even attempt. Ms. Beard applauds movements like #MeToo and the awareness they bring, but says that by themselves, they won’t be enough. “A hashtag is important – but it has to be converted into action.” As wary as Ms. Beard is of oversimplifying the past, she is as resistant to prescribing easy, simple solutions.

It somehow felt wrong to interview Ms. Beard and not bring up Ancient Rome, so I asked if there were any Roman stories she wished she could put in the morning reading of modern leaders.

“Well, the reason that Julius Caesar failed might be instructive. He was a populist dictator, with a very sure touch in talking to the people. But the elite killed him,” Ms. Beard said. “Make of that what you will.”

Edward Stephens is Deputy Editor of the Brunswick Review, and based in New York

The Talk at Brunswick: Speaking with Audra McDonald

The launch of the Brunswick Review’s new podcast features an interview with the Broadway and television star. By Carlton Wilkinson.

Successful struggles with cancer were a prelude to the challenges of 2020 for Lisa Nagorny and her family and taught her important lessons in appreciating the time you have.