How can corporate America turn its pledges and promises on racial equity into tangible change? John Rice, CEO of nonprofit MLT, has a plan—a certification, actually.

CEOs and leading companies have said that Black Lives Matter in their statements, in their tweets and in their advertisements. In late October, the nonprofit Management Leadership for Tomorrow (MLT) launched the MLT Black Equity at Work Certification to help companies pledge their commitment to racial equity once more, and loudly—only this time with their actions.

The Certification sets a rigorous, achievable standard for the traditionally nebulous topic of racial equity—providing a roadmap for employers who want to achieve Black equity in the workplace, and support Black equity in society. “The business leaders I hear from today genuinely want to make progress on creating equitable workplaces, they just don’t know how to do it,” says MLT’s CEO, John Rice. “Black Equity at Work mirrors how organizations plan and execute every other part of their core business, and every other aspect of ESG.”

The Certification, which has already been adopted by many leading companies including Amazon, Bain Capital and ViacomCBS, asks employers to commit to set measurable goals and develop plans to meet them in five core areas:

1. Having equitable Black representation at every level;

After employers submit that plan, they are eligible to become MLT Black Equity at Work Plan Approved. Becoming certified requires that employers demonstrate tangible progress in those core pillars; maintaining that Certification requires companies to follow through on the strategies they’ve submitted, and have their data and results reviewed by an independent third party. In 2021, MLT also plans to launch a separate certification for Latinx equity.

Mr. Rice founded the nonprofit in 2001, after a career that had seen him hold senior postings at the National Basketball Association and Disney. MLT has since advised more than 130 leading US companies on diversity, equity, and inclusion, while also propelling thousands of young Black, Latinx and Native American undergraduates to high-trajectory jobs, early career talent to top-tier business schools and mid-career professionals to senior leadership roles.

A month after the MLT Black Equity At Work Certification launched, Mr. Rice spoke with the Brunswick Social Value Review about its potential: “I believe it can help America’s employers shift from perpetuating the Black inequity problem to propelling the Black equity solution,” he said.

Why a certification?
There’s a conviction among senior executives and business leaders that the status quo isn’t acceptable. Look at their public statements, the diversity reports they’re publishing. You’re seeing the word “accountability” more. Good intentions and a “let’s do better than last year” level of rigor—which would never be acceptable in any other part of the business—just won’t cut it any more in racial equity, either.

We wanted to establish a comprehensive framework for racially equitable workplace practices to which organizations could manage and hold themselves accountable—because we believe that Black equity specifically, and racial equity more broadly, are achievable in any workplace whose leadership is committed and clear on how to proceed.

“To this point, how could you know if a company was racially equitable?”

What’s been the response to it thus far?
Incredibly positive. At the moment, we’re limiting the number of partners that we’re bringing on so we can refine the Certification engine and experience. But it’s been well-received.

One of the reasons, I think, is the Certification falls into the same kind of analytical construct for strategy and execution that leaders have been using and winning with throughout their careers. For any important opportunity, they define what success looks like in three to five years quantitatively and qualitatively. They manage to that strategy; they hold their team accountable; they have interim metrics; they have internal and external accountability mechanisms. The Certification brings the same rigor and accountability to racial equity that organizations and leaders bring to every other part of their business.

And it meets employers where they are today. The first step is forward-looking: developing a comprehensive three- to five-year plan. That makes it accessible to the private equity firm just starting on its racial equity journey, but it’s also accessible to the organization that’s been at it for a while but hasn’t made the progress that they’d hoped.

If we’re going to build the kind of momentum that will change the system more broadly, then we’ve got to strike a thoughtful balance. We have to build confidence among executive teams that developing and executing the rigorous plan, with the opportunity to become certified, will accelerate their organizations’ progress on racial equity—and even more, that by doing so, it will help their businesses become more profitable.

At the same time, it also has to remove excuses they’ve held on to and spark some tough, overdue conversations. What are they going to start doing that actually widens the road for people of color in their organization? What conversations are they going to have that they weren’t having before? Will they move beyond largely promoting from within and start a lateral hiring initiative to diversify their middle- and senior-management ranks? Are they going to add a board member rather than waiting for one to retire? What about the diversity of their suppliers? 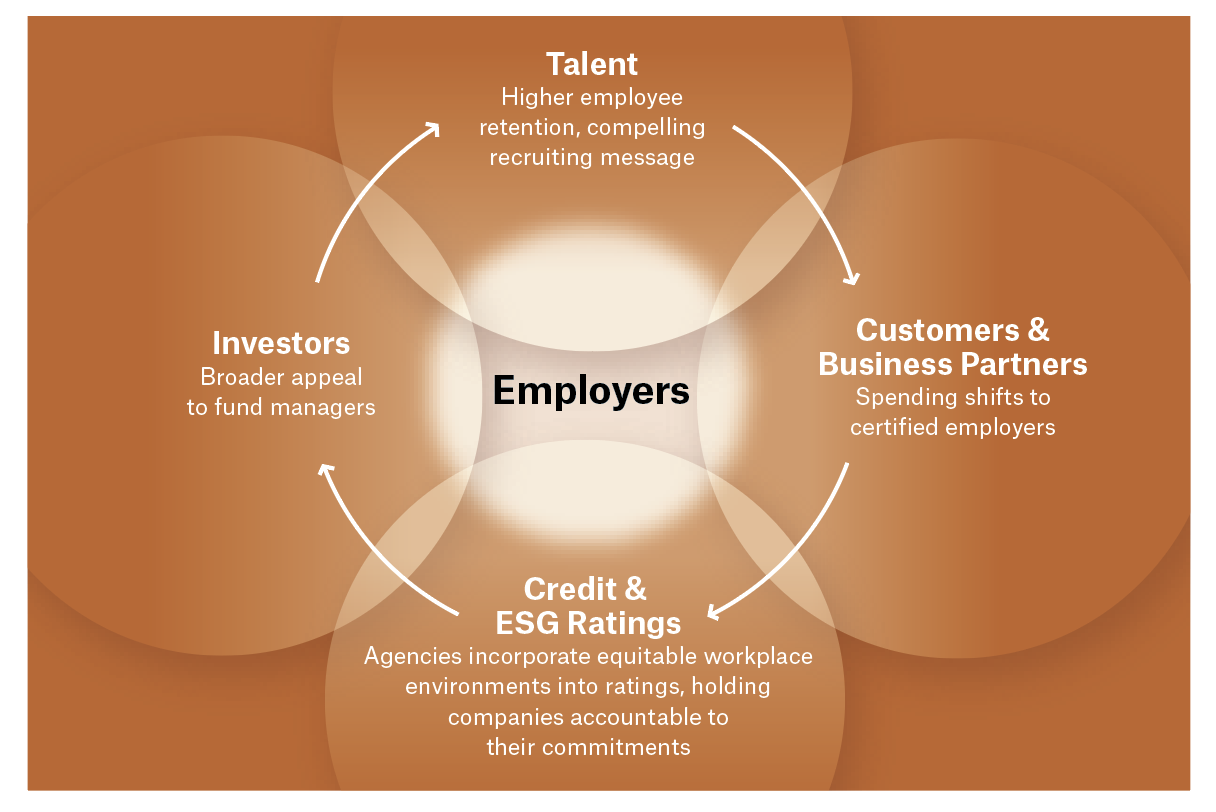 You mentioned systemic change—is it realistic to expect a Certification to deliver that?
We’re offering a comprehensive approach to move the needle on racial equity. And we’re creating visibility among investors, among employees, peers, credit agencies, clients. That’s a key part of this, building what we call “the influence ecosystem” needed for sustainable change.

To this point, how could you know if a company was racially equitable? Surveys and rankings tend to be industry-relative—and what does it mean to be leading a sector if the entire sector’s practices are sub-par and inherently inequitable? The Certification provides an objective, absolute standard, for the first time, of what “good” actually looks like on racial equity. That allows employers to be recognized and rewarded for taking on this challenge and making progress. In that sense, the Certification is about calling organizations in, as opposed to calling them out.

As leaders emerge, their peers don’t want to be left behind. If you aren’t stepping forward toward racial equity, you’re standing on the wrong side of racism.

Most CEOs have heard about the powerful business case for racial equity. Yet from their actions, they seem content leaving these benefits on the table. How do you make sense of this?
I think the business case is too conceptual. Most leaders understand the idea intuitively, but the path to become more diverse remains unclear—often because they’re not well-informed about why they are where they are today or what it takes for racial equity to drive bottom-line results in a business. All of that obscures, or outweighs, those longer-term benefits. When you don’t have a command of the topic, you lack confidence, which elevates your perceived risk of failure.

If, for example, executives continue to embrace the common but quantitatively false narrative that the pipeline of diverse African American and Latinx talent is too small, then they’re likely to conclude they have to compromise excellence to become more diverse—which cuts against the concept of better returns and improved bottom-line results.

We’re seeing a lot of those misconceptions challenged. Leaders are being confronted by facts they couldn’t see—or didn’t want to see—before. When leaders signed those statements saying, “We stand against racism in all its forms,” there were Black and brown employees and their white allies, saying, “Hold on, time out. Our lived experience is fundamentally inconsistent with what we stand for and what you just said you stood for externally.”

For the first time, there was a reckoning among white executives that they were on the wrong side of race. That’s what has elevated racial equity to an enterprise-risk level for organizations. Because how can you say you’re not racist if racism is alive and well in your own organization?

Anthony Applewhaite and Preston Golson are Brunswick Directors; Elizabeth Farlow is an Account Director. All are based in Washington, DC.

Turning a Page on Tech

To “cancel” or forgive? What is privilege, and can we recognize our own? How can a company demonstrate allyship? Nicole Reboe explores the answers with Kenji Yoshino, an anti-discrimination and civil rights expert.