A Storied Past, Present & Future

The Duke of Devonshire talks to Brunswick Arts about the economics of his family’s bookshop, Heywood Hill

Peregrine Cavendish, 12th and current Duke of Devonshire, operates a small, old-fashioned bookshop in Mayfair, a historic, neighborhood of London bordered by Hyde Park near Buckingham Palace. In the age of Amazon, Kindle and Apple iTunes, the economic model for garden-variety independent bookstores has evaporated. But Heywood Hill not only survives but thrives, through a combination of innovation and devotion by the Duke and his son-in-law, Heywood Chairman Nicky Dunn.

The Duke recently spoke with Brunswick Arts about the promise of the book business, as well as its challenges, and the growing global customer base for the shop’s specialized subscriptions and libraries.

The Cavendish family has a historic love affair with books. Andrew Cavendish, later the 11th Duke of Devonshire, was a regular customer at the bookshop founded in 1936 by Heywood Hill. Not only did he become a majority shareholder, he also married author Deborah Mitford, the sister of author Nancy Mitford, who worked in the shop.

The central family estate, Chatsworth, has served 16 generations and is home to a magnificent library of its own, with books dating back to the 16th century, including a first edition of a work by Thomas Hobbes – a resident of the house and tutor of the second Duke – and a prayer book with an inscription by King Henry VII to his daughter Margaret Tudor, Queen of Scots.

That’s a good place to start. I’m the only person of my immediate family who hasn’t actually written a book. My sister, Emma, has written the authoritative book on rag rugs. And Sophie, my other sister, wrote a couple of books. My mother is better known as an author, and she wrote quite a lot of books. My father wrote a wonderful book about a racehorse called Park Top, and a book of memoirs as well. So, they’re all writers. I tried and failed. It was too difficult, I thought.

Are you a collector of books yourself?

I don’t collect books as such; I do buy quite a lot of books, partly because of Heywood Hill and partly because I always hope that I’m going to read them and quite often don’t. [Laughs] I hardly ever buy old books. I don’t buy sort of library-quality books.

My taste has changed. When I was much younger, I’d read an awful lot of novels. I prefer contemporary, mostly non-fiction now. I read a lot of my family history and things to do with Chatsworth or the collections or painters or artists or whatever. If ever there’s a new monograph about a private house in England, I have to buy it. There are about 40 altogether in the library as sort of reference books. 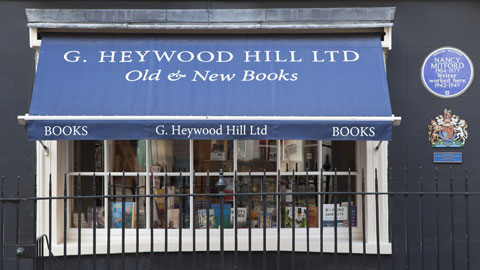 Founded by George Heywood Hill in 1936, the shop at 10 Curzon Street in Mayfair remains a landmark of literary life. During World War II, Evelyn Waugh saw it as a center “for all that was left of fashionable and intellectual London.” A scene in John le Carré’s 1974 novel Tinker Tailor Soldier Spy is set there.

Is that how buying turns into collecting?

All books – to somebody or somebodies – are very interesting to read; not all of them to everybody. People tend to buy books on subjects they’re interested in. But they’re also objects of almost a beauty, and certainly libraries are very beautiful rooms. They are important artifacts, and still are beautifully made.

As far as luxuries go, hardback books are very good value. I’d much rather read a hardback than a paperback. I do read sometimes books on a Kindle, but not very often. Hardback books are lovely things to have. And a room without books in it is quite a depressing place. I would hate to be in a room without a book, and I’d hate to go on a journey without a book, even if it’s only a half an hour train journey; not to have a book in one’s bag would be very unusual for me and I’m sure for most people.

So, people have always collected books for those two reasons: for the knowledge or the interest that they give and for the beauty of them as objects, particularly en masse. With both art and books, even if it starts off as trophy collecting, it finishes up being a real enjoyment. I don’t know of anyone who collects either books or art who doesn’t get more pleasure than they may have anticipated.

How has collecting changed in the digital age?

Obviously, the internet has transformed book collecting. Anybody with a computer has a hugely expanded reach. They find out at the click of a button what there is on what subject and where and how much. I don’t think that’s done quite a lot of bookshops much good, particularly shops selling old books as well as new books.

Certainly, at Heywood Hill, we’ve had to take this challenge on. We’ve had to raise our game as have all booksellers. But it certainly doesn’t mean the demise of the independent book shop. There are far fewer of them, of course. But as long as we can provide the service that we do, there will be a place for us. We sell a lot of copies of bestsellers. But we like to go beyond that.

One thing the team has done very successfully is provide completely bespoke services – including subscriptions – the digital world can’t provide that.

The subscription idea grows out of that effort to create bespoke services, yes?

Yes, and we’re launching one now in the US. We called it “A Year in Books.” This was largely Nicky Dunne’s work. He works incredibly hard and makes it great fun for me. I sort of stand back, but I cheer him on as best I can. The subscriptions idea has grown enormously and is incredibly popular. If there’s 12 books in the package and people find that nine of them are books they’ve really enjoyed, then one has to regard that as a great success. The number of repeat subscriptions we get is a testament to the care that the team takes.

And it differentiates us from other shops. It has been copied – inevitably, because it’s a good idea and a good idea is always copied. But we have a good reputation in this area. 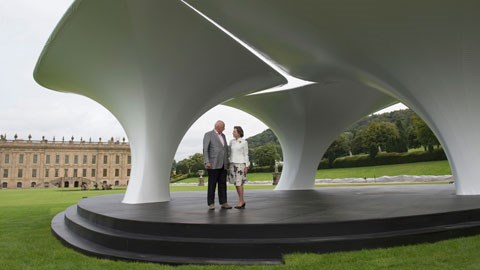 The Duke and Duchess of Devonshire stand beneath “Lilas,” a work by Iraqi-born British artist Zaha Hadid, at Chatsworth House, the family estate in Derbyshire, England. Chatsworth was founded by Elizabeth Talbot, later known as Bess of Hardwick, in the 16th century. The original house suffered deterioration and was rebuilt and finished into its current form in 1707.

In the 1950s, the family turned the building over to a charitable trust and opened it to the public. The Duke and his family live there now as tenants, but also stewards. He oversaw the first major renovation since the 1800s, restoring much of the gilded splendor that had been lost
to time.

How do you choose books for a specific person?

We have very knowledgeable booksellers – one is an Oxford graduate who reads over 150 books a year himself. Another’s been selling books for over 30 years. Nicky eats, sleeps and thinks books, when he isn’t with his family. When we get a repeat subscription, we can get to know the customer better, their likes and dislikes. And we encourage comprehensive feedback.

The subscription service is already in more than 50 countries. And we feel like the light from Heywood Hill beams onto all those countries. And customers will be beaming back.

We’ve benefited from extremely good word-of-mouth recommendation – the best form of advertising. But ultimately, it’s the books – the choice of books, that is the key. If that doesn’t work, nothing works.

Years before Nicky was involved in the business, my father worked with the staff here to create an Irish library. That was initially housed at Chatsworth and it is still in the family. Nicky’s picked up that idea and created libraries that are usually subject-specific.

He’s working on a library in France at the moment, which is aiming to tell the positive story of humanity across the centuries and the continents. So that’s quite a wide-ranging library. And his next project will be a library on capitalism for a fun management company. Then there’s a sports-specific library for an American, as an exceptional milestone birthday gift.

These are just a few out of the wide varieties of libraries we have been making. For those sort of collectors, Nicky will work with the architect or the interior designer or both.

People can spend at the lowest six-figures on the library – that’s not out of the way. But it’s a lot of books and it makes for a beautiful library. Compared with the price of contemporary art, that would buy you one picture.

What do you think about the importance of libraries for literacy?

That’s more to do with public libraries. I can only talk about this in the most general way. I’m well aware of the economic factors for local government at the moment. But lending libraries are a very important part of civilization, not only because they enable people to have access to books who would not otherwise, but also because they are a place for people to go where they’re safe and warm and they’re not going to be harassed by anybody and they can sit and read. It’s a safe-haven place to go. And that’s incredibly valuable. Libraries are a sign of civilization.

What are your favorite books?

I’m reading a book called The Colonial World of Richard Boyle, First Earl of Cork, because he is an ancestor and also because he had an incredibly fascinating career, particularly in Ireland. That was beautifully written by David Edwards and Colin Rynne.

Otherwise, I would have to say, anything by Adam Nicolson. The first book of his I read was called Restoration about the rebuilding of Windsor Castle, a fantastically interesting and exciting book even though you know the result at the end. He wrote another about the making of the King James Bible. He’s just a wonderful, wonderful writer on any and every subject – as good as it gets.

Roya Nasser is a Partner and Head of Brunswick Arts, the firm’s advisory arm for cultural institutions and charitable organizations around the world.