“Hi, David. This is Gary. I just got down here, and I want to make sure that you and your family get out of this situation safe and sound.”

“Hey,” said David Koresh, the leader of a messianic religious cult holed up in a compound near Waco, Texas. “So, who’d you say you were with?”

“The FBI,” replied the voice on the other end of the phone.

That was the first of countless conversations between David Koresh and Gary Noesner, the lead negotiator on-scene during one of the most infamous FBI sieges in US history. Following a vicious firefight between the cult, who called themselves the Branch Davidians, and the Bureau of Alcohol, Tobacco, Firearms and Explosives (ATF), the FBI was charged with managing the standoff, and Noesner was promptly ushered onto a plane headed west from his home near Washington, DC towards Waco. When he arrived, several Davidians and ATF agents were dead, and Koresh, the group’s charismatic and manipulative leader, was badly injured.

This was the situation Noesner stepped into, not yet knowing that it would become one of the biggest tests of his career, and one of the worst tragedies of the decade.

I first learned about Gary Noesner after watching Waco, a Netflix miniseries dramatizing the events at the infamous Mount Carmel compound near Waco, Texas in 1993. Partially based on Noesner’s autobiography, Stalling for Time, the series tells the story of the FBI siege and the decisions, on both sides, that led to the deaths of 76 Branch Davidians, including 20 children. Noesner, played by Academy Award nominee and perennial tough guy, Michael Shannon, is the voice of restraint throughout the crisis, pleading with his superiors to employ negotiation over violence, and locking horns with a frustrated tactical commander who was itching to storm the compound with guns blazing. 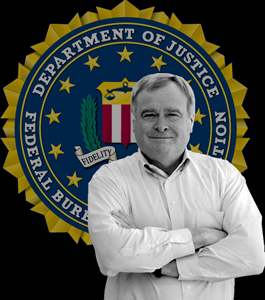 The approach to crisis that he staunchly advocated throughout his career seems particularly relevant today, in light of the national standoff between protestors and police. Wanting to learn more, I sent an email to Noesner through his website and he agreed to an interview. A few days later, I found myself face-to-Zoom with the legendary negotiator, discussing the strategies and tactics he employed over his long career, which culminated in his appointment as the FBI’s most senior hostage negotiator and leader of its hostage negotiation training program.

I asked Noesner if he thought the tools he learned to use as a negotiator could be helpful in establishing trust and respect between the disagreeing parties. “I think there's not enough listening on either side,” Noesner tells me from the kitchen table of his Virginia home. “If someone's protesting, rather than simply condemning them in some blanket fashion, we'd be better off saying, ‘Okay, what motivated you to come out here today? How do you see this issue? Does it impact you directly or are you empathizing with the people who have been going through this discrimination for years?’

“I think the biggest problem we have today is people aren't talking. They're shouting at each other,” he says. Tone, according to Noesner, is everything.

Hostage negotiation is “creating a relationship of trust in a fairly compact period of time,” he tells me. “We're trying to project that we're here to help them, to resolve the situation. We're sincere. We're genuine. We want to hear how they feel about what's going on and essentially why they're doing what they're doing.”

Noesner knew he wanted to work for the FBI fairly early on in life. He grew up in a mostly segregated town near Jacksonville, Florida in the early 1950’s. “I remember my parents sitting me down and telling me that segregation was not right, and emphasizing that we had a responsibility to look out for others less fortunate than us, regardless of their skin color,” he writes in his book. His inspiration to join the Bureau came from, believe it or not, an episode of The Mickey Mouse Club, when the characters traveled to the FBI headquarters in Washington, DC. He was fascinated by the investigative work and by the suave, black-suited agents he saw on the show. At that moment, he decided he would do whatever he could to become one of J. Edgar Hoover’s G-men.

He finally got his opportunity to join the FBI in 1972, albeit as a clerical employee. By 1976, he was promoted to field agent in the FBI’s office in Columbia, South Carolina and, a year later, was asked to join the Bureau’s Foreign Counterintelligence Squad, where he traveled the world chasing down and interrogating international terrorists.

I think the biggest problem we have today is people aren't talking. They're shouting at each other.

It was only in 1980 that he became seriously interested in the FBI’s negotiation team. Noesner tells me that the practice of hostage negotiation really started with the NYPD in the mid-1970’s and then “the FBI stole it, expanded its use and application, and pushed the boundaries of our knowledge of how it all worked.” Early negotiators were trained to slow down the situation and talk to the subject, but by the early-1990s, the FBI was looking for new tactics to improve the practice’s effectiveness. “That is when we glommed on to active listening [which] we got from the counseling community,” Noesner tells me. “I think that was the big change in negotiations; we realized that [there were] a handful of skills that were extremely effective in allowing us to come across as non-threatening, non-judgmental.” The difference, he says, is that people did not expect the police to show up to a hostile situation and play nice. “Now, all of a sudden, we're there saying, ‘Tell me what happened’ and ‘I can understand why you would be frustrated and I appreciate that.’” These tools change the entire dynamic of the interaction, he says.

Specifically, negotiators employ a variety of active listening techniques, including asking open-ended questions, labeling emotions and paraphrasing what the person said back to them. “Every time we're able to accurately reflect back those things that we hear, it's a powerful tool that lets the person know I hear you.” That was the first time, he says, that the FBI had a set of defined communication tools they could teach, test and measure when engaging in a confrontation.

It was at Waco that these techniques were really put to the test, as the onsite negotiation team worked day and night to bring a peaceful end to the standoff.

The first thing in these types of negotiations, Noesner says, is that “all the stimulus the subject receives should be consistent. It should say the same message.” It sends mixed signals to the subject if law enforcement agents say one thing and do another. “There'd been loss of life and wounded people and high drama, high emotions. Our job was to cool it off, deconflict, de-escalate, lower the confrontation, and slowly [go] about that process of establishing that relationship and that rapport that would allow us to have some influence.”

In strategizing how best to connect with Koresh, Noesner and the rest of the negotiation team opted to leave religion out of the discussion. Some religious scholars criticized the FBI after the fact for not enlisting them to debate Koresh’s theology with him, such as his messianic interpretation of the Book of Revelation. Noesner, however, says that scholars never would have been able to get Koresh to abandon his ideology. “I'm sure David would've enjoyed debating with them ad nauseam. But no minds would've been changed and nothing would've been accomplished,” Noesner says. In fact, there were times when Koresh would keep negotiators up all night debating religion and then during the day, couldn’t make any decisions because he was sleeping.

The Waco Siege ended on April 19, 1993 with the Branch Davidian compound engulfed in flames.

Instead, Noesner and his team attempted to appeal to his “more authentic, natural personality.” According to Noesner, “When we were in that other realm, that realm of normality with Koresh, that was the space in which we got people released.” The FBI generally does not try to talk somebody out of their beliefs, he says. “We just try to look for areas where we can make a connection and look for similarities and areas of understanding, and try to exploit [them].” Utilizing active listening skills, Noesner and his team were successful in securing the release of 35 people, including 21 children.

For some, however, such as the tactical commander at the scene, the trickle approach Noesner and his team were taking – that is, convincing Koresh to slowly let his disciples out one-by-one – was not quick enough, and frustrations began to grow.

“[The tactical commander] wanted to exert external pressure on the mistaken belief that the harder you push them on the outside, the more likely they are to cave,” according to Noesner. One “push” executed by the tactical team was broadcasting loud music and grating sound effects through speakers pointed at the compound at night. Another: flattening nearby cars with tanks in a show of force. The commander never realized that “he was fulfilling the paradox of power,” Noesner says, “and that the harder you push, the more likely you are to get resistance.” Despite, and likely because of, his protestations over the conflicting messages, Noesner was relieved of his position and sent home on day 26 of the 51 day siege. They wanted somebody “more amenable to aggressive tactics,” he says. The last time a Davidian peacefully exited the compound before it went up in flames was three days before Noesner’s dismissal.

Noesner cautions that, despite the FBI’s failures at Waco, he believes that David Koresh was to blame for the appalling outcome. Noesner says that Koresh “was a malignant, narcissistic, manipulative cult leader. [He was] as sinister and dark as, or far more than, was portrayed in the TV show.” The show came up short in their depiction of the way Koresh controlled his followers, Noesner explains. “They didn’t show his darker side. He was given the opportunity, every day, to lead his people out, to do the right thing. We made promises, concessions, accommodations.” Koresh wouldn’t budge. “At the end of the day,” Noesner says, “it was simply too much for him to give up being a living god.”

Noesner told me that after people surrender in a standoff, he always asks what was said that made them give in, and in various ways they tend to say the same thing: "I don't remember what you said but I liked the way you said it."

Talking to Noesner, it’s easy to see how powerful a thoughtful, relationship-based approach to communication can be, especially in high-stress situations. It’s “your tone and your demeanor, your likeability, your genuineness, your sincerity, those attributes are what make a successful negotiator,” he says. “That is the lifeline that people need.” In today’s time of unrest, let’s hope we take to heart the lessons of the negotiator, and learn to listen before we act.

Noam Safier is an Executive in Brunswick’s New York office.

The Rise of Japanese Rugby

Kensuke Iwabuchi, Chairman and CEO of Japan Rugby Football Union, talks to Daisuke Tsuchiya and Misato Nasukawa about building on Japan’s string of international successes in the sport.