Mirror, mirror on the screen, who’s meanest of the mean? Movies reveal how tarnished the image of corporations really is

In the 1987 movie "Robocop," a demonstration in the Omni Consumer Products boardroom goes horribly wrong when a prototype – a huge police robot called ED-209, designed to “pacify” urban areas – malfunctions and fills a young exec full of lead. “I’m sure it’s only a glitch,” the CEO tells the Chairman, as others gape at the bullet-riddled corpse behind him. “A temporary setback.”

The Chairman retorts, “You call this a glitch?” There’s a pause, a beat, before he delivers the punch line: “We’re scheduled to begin construction in six months. Your ‘temporary setback’ could cost us $50 million in interest payments alone!” 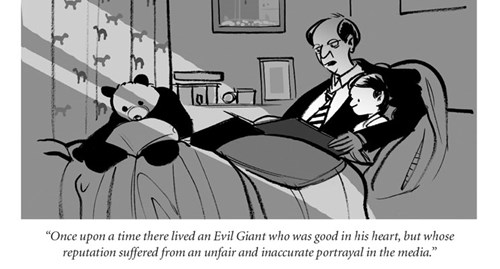 In a 2016 Brunswick Insight global survey, only 37 percent agreed that “businesses in my country are honest and trustworthy”; more than half, 59 percent, agreed that business leaders don’t understand the challenges most people face.

Hollywood zooms in on that mistrust. As early as 1927, the classic silent film “Metropolis” showed industry subjugating the lower classes for the benefit of the privileged few. In release after release since, the indictment of corporations has continued.

In the 2007 drama “Michael Clayton,” a whistleblower at a pesticide company is the target of the business’s general counsel, who transforms into a murderous monster – no special effects needed.

The lone hero fighting a sinister megacorp works because it draws from real life. The 2000 movie Erin Brockovich was based on the true story about a lawsuit against an energy utility for toxic pollution. Big corporations can sometimes do terrible things.

In sci-fi, that lesson is a trope: think Weyland-Yutani Corp. in “Aliens,” Tyrell Corp. in “Blade Runner,” Cyberdyne Systems in “Terminator,” Multi-National United in “District 9” – each company fights for its own ends against society’s interests. On TV, in the Golden Globe-winning series “Mr Robot,” a hacker battles “multinational CEOs that he believes are running (and ruining) the world,” according to USA Network. And in Syfy Channel’s “Incorporated,” amoral multinationals actually do run the world and create wondrous playgrounds for the elites, within walls built to exclude the poor rabble. A full 90 years after “Metropolis,” that theme still resonates.

This subject matter has been approved for all audiences: in the 1996 Disney remake of the classic, “101 Dalmatians,” fashion tycoon Cruella de Vil seeks to slaughter puppies for their fur. In 2014’s “The Lego Movie,” a child invents the story of a super villain named … “Lord Business.” His diabolical secret weapon: an old tube of Krazy Glue, with which he will make his vision of the Lego world permanent. “Now my evil power will be unlimited!”

Many parents of kids in the audience work for corporations – but laugh along all the same. Film and TV reflect the public imagination – but also help shape it. As Big Business has played the archetypal bad guy on screen, too often it has been cast as the villain-of-choice in real life, for regulators, policymakers, populist politicians – even employees.

It’s not Hollywood’s job to change such perceptions – it’s up to companies themselves. Business is a powerful engine of progress – raising the world’s standard of living, increasing life expectancy, giving us all the miracles of communication, health and travel that we take for granted. More than ever, corporations are part of the solution to global challenges – not just part of the problem. They need to be better at telling that part of the story.

Carlton Wilkinson is Editor of the Brunswick Review, in Brunswick’s New York office.

Brunswick’s Maria Figueroa Küpçü talks to Professor Tensie Whelan, Director of the Center for Sustainable Business at NYU’s Stern School of Business, about the need to reshape corporate leadership for the future.

Welcome to the second edition of the Brunswick Social Value Review, born of our belief that to be a leading company in today’s world you need to deliver financial value alongside social value.