After growing up sharing a love of rowing with his twin brother, Brunswick’s Scott Durant found himself alone on the Olympic podium in Rio

But if Scott hadn’t spent his twenties climbing a corporate ladder, he had a solid alibi. “I’d spent the last 14 years rowing,” he says. And he had an Olympic gold medal to show for it, earned as part of the British Men’s Eight in Rio in 2016.

Reaching the podium in Rio was the culmination of a dream that had bordered on obsession. Yet when the moment arrived for Scott, something was missing – his identical twin brother, Mason. They had entered the sport together at age 14. At home each night they had talked about training and competing strategies. They had shared a tattered copy of the autobiography of Sir Matthew Pinsent, a British rower who won four Olympic gold medals. They went so far together that both earned a spot on the British national rowing team. Then a back injury ended Mason’s rowing career.“I always kind of thought that if I made it, we both would make it,” says Scott. Instead, he wound up going to Rio with the British Men’s Eight alone. “Naturally, I was very pleased for him,” Mason says.

The pursuit of an Olympic career is largely solitary, even in a team sport such as rowing and even among twins. Scott describes his 14 years of training as a relentless effort to close the gap between his performance and his potential. “There was always someone who was better than me,” he says. “I would rather try and beat my own personal bests than focus on beating others.”

When they started rowing, Scott and Mason didn’t stand out. “I was never particularly good at sports as a kid, wasn’t someone expected to win a gold medal at the Rio Olympics. As an underweight, frankly weak and fairly soft 14-year-old boy, I was below average in every respect and failed to make my school’s top boat in my first two years of the sport,” Scott says. “In my first national rowing competition at age 15, my team finished fourth from last, out of 50 crews.”

But the twins persevered. “When we were 16 or 17, we realized that the more we put into it, the more we got out of it,” says Mason.

“All I ever thought about was rowing,” Scott says. “During school lessons I would plan how I was going to structure my next 2,000-meter indoor rowing test. I would daydream about what it must be like to row for Great Britain. I barely allowed myself to think past the goal of making the national team. The Olympics? The British Men’s Eight had won only one Olympic gold medal since 1912.”

To Scott that obsession was a blessing. “I felt lucky that I knew exactly what I wanted, something many of my close peers are yet to resolve,” he says. “A big part of this dream was having short-term goals. I was constantly trying to increase the distance I could row in 20 minutes on the rowing machine.”

His second year at Oxford Brookes University, Scott made the first team, after placing only the third team in the first year.“In five years at Oxford Brookes, I obtained undergraduate and graduate degrees in town planning while training six days a week, once or twice a day, for an average of three hours a day. By the end, I had rowed in boats that had won a lot of races at a student level.”

Mason and Scott still shared the dream of making the national team. Even though they rowed for separate universities, they won first place together in a boat at the prestigious Henley Royal Regatta race in 2012. “That was quite a big win, and doing it together added an extra level,” says Scott.

In 2009, a back injury nearly ended Scott’s career, besieging him with spasms that rendered him immobile. Eighteen months of physical therapy convinced him to train his entire body, especially his core. “If all you do is row, along with strength training that targets muscles needed for rowing, your body falls out of balance,” he says.

After college graduation, the boys worked together at the Oxford Brookes University sports center and trained together. Eventually, both made the national team, which provided a cost-of-living stipend. But their greatest source of support was their mother, Diane Durant, a teaching assistant and learning mentor in a local primary school. Their father died when the boys were 9, after a long illness that had left him incapacitated. Their mother was left a widow.

“I saw a lot of people around me who weren’t as well supported as Scott and I, in terms of the emotional and financial support our mother provided,” Mason says. “They didn’t carry on rowing as long as Scott and I did. We were lucky to have that support.”

“I have always done my utmost to support all my boys in whatever they have been passionate about and set their minds to,” Diane says. “For Scott and Mason, this was their rowing. They trained together throughout their time at school, culminating in them winning the National Schools Championship in the pair and beginning to row for their country. It was at this point that they were interviewed for our local newspaper, stating that a dream for them both would be to row in the Olympics.” 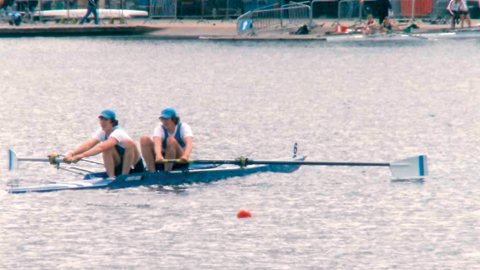 Scott and brother Mason in a “coxless pair,” a vessel that requires a great deal of teamwork between two rowers in order to power and steer the boat. The photo was taken by their mother, Diane, in 2006 – a decade before Scott would row his way to a gold medal.

The first couple of years on the national team were exciting. “Because the position came with a stipend, that meant I didn’t have to work or seek help from my ever-supportive mother,” Scott says. But another back problem flared up for Scott in 2014, causing him to miss practices. “After returning I couldn’t find my previous form, and I ended up in a boat at the World Championships that, if it had been 2016, would not have gone to the Olympics. Mentally, I found this very hard. It was one of the first times I had not achieved something due to underperformance.

“It felt like a failure, but it came at the right time. I was able to assess what had gone wrong and rectify that in time for Rio. It taught me things were never set in stone and that your situation can change at the drop of a hat. It showed that I was going to have to get everything right in the lead up to the Olympics.”

That same year, Mason received the career-ending news of a broken vertebra in his spine – a rowing-related stress fracture. “It was devastating for Mason to have to give up rowing and, as his mother, it was utterly heartbreaking to see this huge disappointment for him,” Diane Durant says.

Barely 18 months away from the Rio Olympics, Scott felt the pressure on him increasing. One bad performance could sink him. “On the national team, if you’re not good enough, they kick you out. I have been there when teammates have been told that they are to go home and not return, and it’s terrible. You wouldn’t wish it on your worst enemy. This pressure, and the fact that there are several athletes going for only a few seats, has the ability to break people.”

But Scott found within himself what might be called a separate peace. “I had already made the decision that 2016 was to be my last year of rowing, and now I was determined for the experience to be enjoyable. I knew it would be brutally hard. But just because something is hard, does not mean it is not fun. I intended to leave out all of the miserable thoughts of things I couldn’t control, and focus on the things I could control.”

Only three weeks before the Rio Games, Scott was notified by the national team that he had made the Olympic Men’s Eight. Both his girlfriend and his mother made plans to travel to Rio, as did Louise Charlton, his aunt and a founder of Brunswick. “He had worked so hard for this,” says Charlton.

One person not heading to Rio was Mason. The Olympics took place during a cycling trip across Europe that Mason had long planned with his girlfriend. “I rowed pretty much every single day of my life for 14 years, so when that career came to an end, I had to put that behind me,” says Mason.

That trip ended just ahead of the medal round for the Men’s Eight in Rio. Boarding a homebound plane in Slovenia, Mason had to shut off his phone just as his brother’s race began. He said he expected Team GB to win, even though they hadn’t finished first in any big races all year. “I spoke to Scott during that entire season, and from what he was saying, I thought they were the favorites,” says Mason.

Scott recalled the taut moment, crouched in a boat at the start line for several minutes before the race began. “It feels like you’re sitting on a box with a caged animal inside,” he says. “You can’t let it out until the right second.”

Great Britain won. “The feeling was indescribable,” Scott says. “I would sway between a state of complete euphoria and being on the verge of tears.” 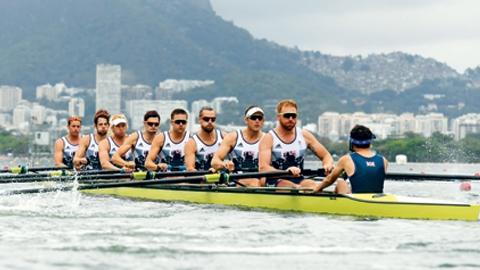 The Great Britain team rows in their first heat during the 2016 Rio Olympics. Scott Durant sits in the seat furthest from the camera – “the bow,” or the “one-seat” in an eight-person boat. The bow isn’t the most powerful rower – they usually sit in the middle of the boat – nor are they the one who sets the pace – that’s the “stroke,” at the stern, shown here second from right. The bow is typically light, and from that position, the rower is able to see all other rowers and call out if they see any issues with form or timing.

Witnessing that victory thrilled Diane Durant. “To actually realize a dream takes a certain kind of dedication, commitment and incredible hard work and single-mindedness that not everyone possesses,” she says. “That feeling of sheer pride and admiration for one’s offspring is overwhelming and amazing, and makes me feel privileged to be their mother.”

For Scott, euphoria quickly gave way to what he calls “a sense of emptiness.”

“My teammates felt it too,” he says. “No longer did we need to train toward perfection, sweating over the smallest detail. The regimented and planned timetable of training no longer existed. We were all free.

“A teammate described the feeling as ‘an alien sense of freedom, tinged with loss.’ Half of my brain was telling me to get up and train at 7:30 a.m. The other half was telling it to shut up and go out and celebrate.”

As the internal struggle subsided, Scott saw he needed to move on, to find the next challenge. After starting in December at Brunswick, Scott found himself seeking professional advice from Mason, who is now three years into his career as a water-management scientist.

Mason couldn’t be happier to field those calls. “Our relationship has always been one where we try to help each other out,” he says.

Kevin Helliker is Editor-in-Chief of the Brunswick Review, and based in New York.