Unearthed in the 1980s, statues from a transitional period of pre-history reveal the human experience in its most enduring aspects.

They were created over 8,000 years ago, perhaps to honor the dead: statues of men, women and children, among the earliest large-scale human figures, pre-dating Egypt’s Old Kingdom by about 4,000 years.

The figures were discovered in the ’Ain Ghazal region of Jordan, near Amman. An entire Neolithic metropolis, in fact, was uncovered in the 1980s, a city some 3,000 strong at its height. It arose in the 8th millennium BCE and lasted for over 2,000 years before being abandoned and returning to dust. 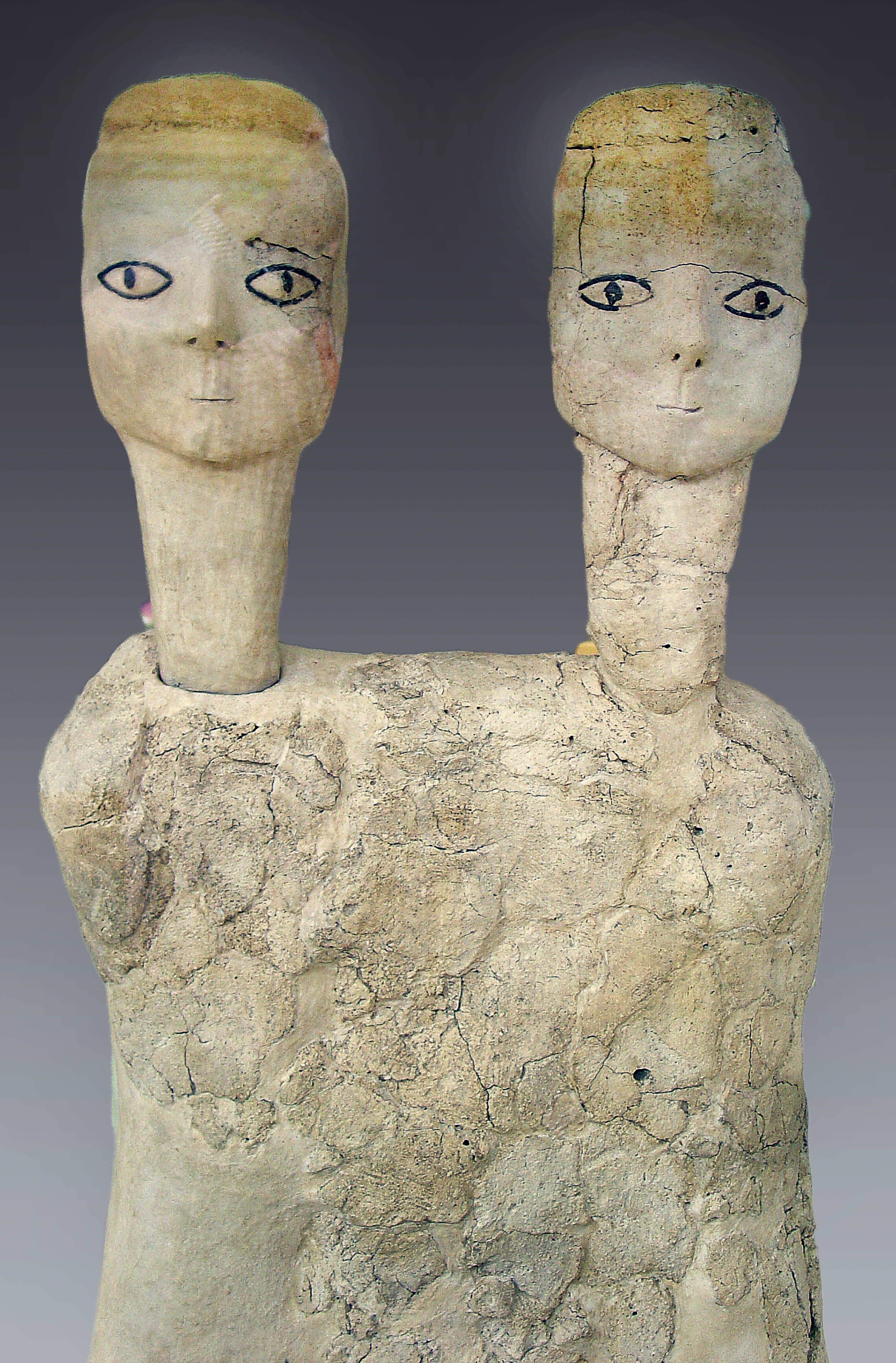 Dated between 6700 BCE and 6500 BCE, this statue is one of 35 such pieces of various sizes uncovered at the 'Ain Ghazal site in Jordan. This one is roughly a meter tall and currently housed in the Jordan Museum.

The period was a turning point in human history, the tail end of the stone age, just before the dawn of civilization as we know it. The statue makers had no writing, did not yet make pottery, but were in the process of shifting to agriculture from a lifestyle of hunting and foraging. They grew wheat and chickpeas, but also ate wild plants; raised goats and hunted; lived in sturdy dwellings of mud brick walls and smooth floors; they loved, quarreled, had children, sang, danced, prayed—and they buried their dead.

Presumably that’s the purpose of these statues: They are important ancestors, loved ones who died. Built with scarecrow-like skeletons of reed and twine that were encased in a lime plaster, the statues were clothed, painted and detailed to create eerily expressive figures. Some were freestanding. Some had two heads—marital couples? Friends? Siblings?

The figures are light on details: hints of breasts on what are believed to be the women, but no genitalia. More attention was given to the faces: gently flaring noses with nostrils, small mouths with slight lips, sloping cheekbones—and the eyes. The eyeballs bulge slightly and are set in sockets that sink back from the nose and eyebrow. The whites are whiter than the skin. Bitumen, charcoal and copper add colors and definition; dark pupils create a steady gaze. They’ve returned from the afterworld to look at us.

Probably there were rituals surrounding these artifacts, but all such details are lost in the darkness of prehistory. Once they had fulfilled their function, whatever it was, they were broken. The pieces were buried, just as the dead themselves would have been.

Painstaking restoration, involving cutting-edge techniques and years of highly delicate detailed work, brought them to displays in the Smithsonian Institution, the Jordan Museum, the Louvre Abu Dhabi and the British Museum. Much is irreparably lost. But what remains speaks to us across the vast gulf of time of all that has not changed, all that we still have in common with those ancient humans: craftiness, love and loss, spiritual rituals, unchanging wonder at our place in the universe, the tug of war with death.

Look into those faces, those eyes, and what looks back isn’t just an artifact, but the integrity of the human experience itself, in all its enduring mystery.

Carlton Wilkinson is Managing Editor of the Brunswick Review, based in New York.

She entered the water hoping to regain her mobility. She became a record-breaking aquatic marathoner. By Craig Mullaney.

Christy Brown, widow of the late CEO of family-run Brown Forman, wants to change the world through an emphasis on health. Brunswick’s Carlton Wilkinson reports.

A team of Oxford researchers led the world in identifying successful treatments for infected COVID-19 patients and offer a model for the future. By Ben Hirschler.