Successful struggles with cancer were a prelude to the challenges of 2020 for Lisa Nagorny and her family and taught her important lessons in appreciating the time you have.

Under stay-at-home orders, Brunswick offices have developed a new tradition: At day’s end, a colleague sends a short essay to his or her working-from-home office mates. Funny, sad, inspirational, philosophical—these notes are often sprinkled with favor recipes and TV shows. The Review is selecting a few to share.

I glanced at Hudson through the rearview mirror. He was sitting in the backseat of the car, peacefully reading his latest Dogman book, as if it was just another trip to see Abi and Bamboo (his nickname for my parents). He knew about coronavirus, in a 6-year-old kind of way. He knew that North Carolina would be safer for us, that his class would be online, that Abi would be his “teacher,” that he’d have a backyard—imagine! He’d have to leave his dad (my ex) behind, but Daddy would join as soon as he could. 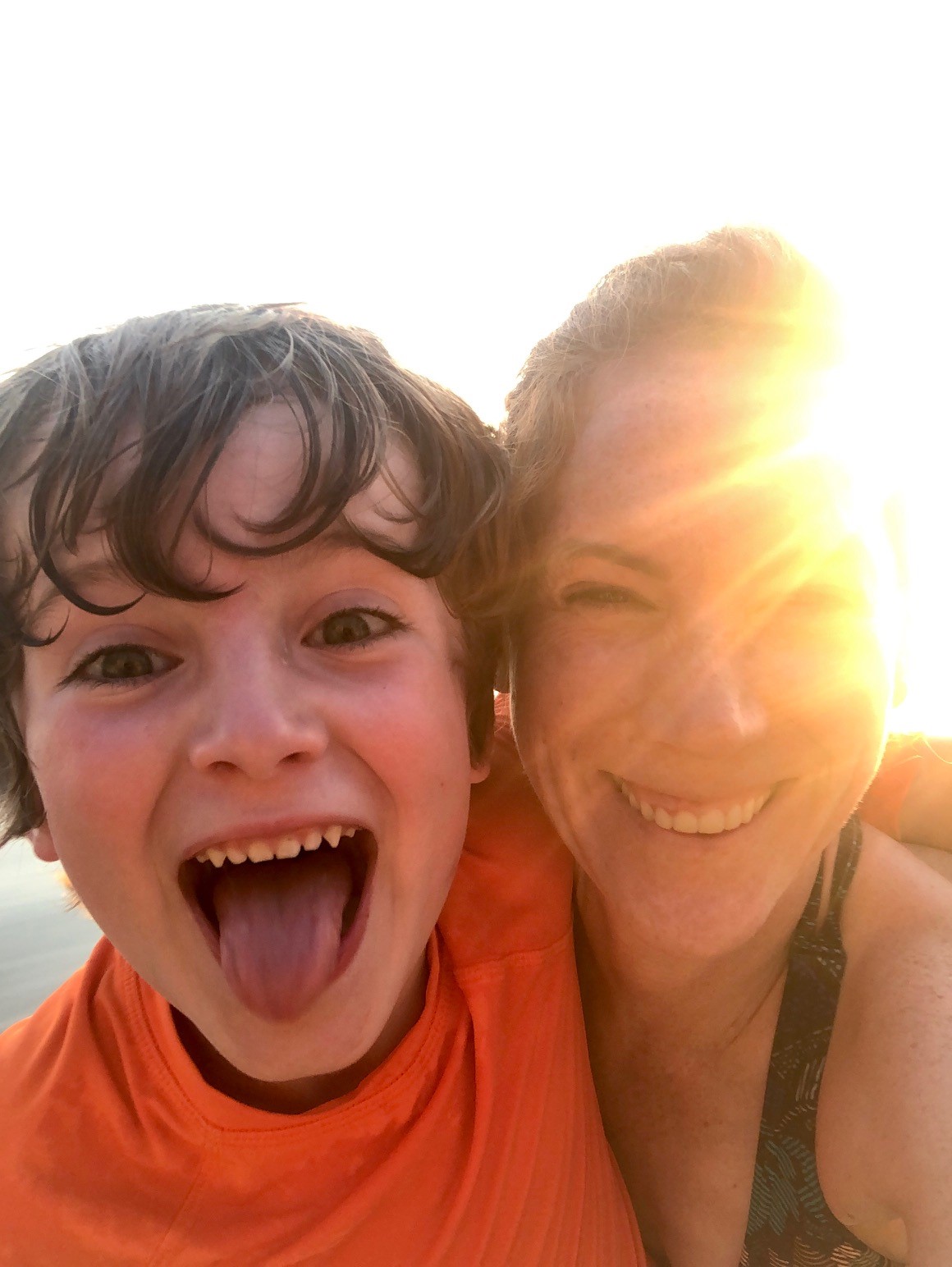 Ms. Nagorny and her son, Hudson

My parents were in their first year of retirement—my mom, a former teacher who would go on to joke she’d take her unruly middle school Spanish students over homeschooling a strong-willed 6-year old; my dad, a gritty, self-made entrepreneur whose actions taught me to never give up and to trust my instincts. I needed support; Hudson needed stability; we all needed family.

As I drove down to NC, I thought about how much we had been through. Two years earlier, almost to the day, my life turned on a dime: I was diagnosed with an aggressive form of breast cancer.

I was 36 years old with no family history. “Less than 1 percent chance,” doctors said. It still somewhat haunts me that I’m alive today only because of my persistence, perhaps ingrained in me from watching my dad never take “no” for an answer—and thereby achieve the seemingly impossible. I’m here writing this today because I didn’t accept the answers I was given. Not from the first doctor who said nothing was wrong. Or the fourth. Not as I teared up out of frustration, “I was a woman in the military, deployed to Afghanistan, trained not to complain. If I say something is wrong, I mean it!” Until a test—considered a longshot—ultimately led to my diagnosis; even a month later would have resulted in a markedly different prognosis.

I felt a wave of relief at finally having a diagnosis (I wasn’t a hypochondriac!), terrified of dying (Hudson mustn’t grow up without me!), enraged that this was happening to ME (why?), anxious at everything I couldn’t control and the unknown ahead. With a long road of surgeries, chemo and immunotherapy ahead, I realized I had a choice: be a victim, put cancer in the driver’s seat—or take charge and lead my best life.

And with that, I bought a season ski pass for the following year, fully realizing I’d still be in treatment. “The hell with cancer,” I said dispassionately. “I’m not missing another ski season.” I’d been waiting years to finally share my favorite sport with my son.

I went on living my life, often unbeknownst to those around me, thanks to Bobbi Brown bronzer and cold capping—a crazy invention where you literally freeze your scalp (by wearing a cap that’s -30° C!) to prevent hair loss during chemo. Life often didn’t look the same, but I took every opportunity to seize the moment when I was feeling well. I discovered if I chose to push forward with a positive attitude, extracting any goodness from a difficult situation, it made all the difference. It turned out skiing with Hudson—a couple hours on the slopes and a 7 pm bedtime—was just the right speed; no more nonstop laps while the chairs were spinning. It didn’t matter. Time with my son was more satisfying.

Prior to her professional career, the author served as a US Navy Lieutenant Junior Grade. She is shown here in 2007 during a deployment in Afghanistan.

I couldn’t have done this without the support of my family, friends and the firm. (I still feel so grateful for all the support and encouragement from Brunswick, a testament to what a special place this is. Seriously.) My mom took a leave of absence from work and moved into our two-bedroom apartment in New York to help with Hudson so I could return to work while undergoing treatment. My dad regularly visited from central Pennsylvania, so much so that he befriended a parking garage attendant and became a regular at Luke’s Lobster.

Until one day we were hit by another curveball. What my dad thought was back pain ended up being multiple myeloma, a rare, uncurable blood cancer. It was my experience that pushed him to get an MRI and as an active patient who also knew how to navigate the system, I was able to help fast track his diagnosis and treatment. In a sense, I saved his life just as he saved mine. Together, we went from my last chemo infusion to his first oncology appointment, not your typical father/daughter bonding experience.

By last summer, cancer was fully in my rear view; I was cured. My dad was in remission, for now. Life was good. No, life was AWESOME. We were all back in full stride, thinking ahead to all the possibilities of 2020. And then ...

So, there I was, driving down to NC, where my parents had since moved, reflecting on where we’ve been, anxious about what’s to come, and feeling powerless that my life was now being disrupted again. I thought about how some of the brightest silver linings emerged from these unexpected challenges ... the deep gratitude that comes with facing one’s mortality; appreciating the small moments, not just living for the big ones; closer relationships with my friends and family ... what would emerge from this experience? Remembering two years ago when I chose to live my best life despite the circumstances in front of me, I made that same pledge.

Each day when I wake up, I try to think of two things I’m grateful for and commit to two small actions, within my control, that will bring me a little joy.

Six months later, we are still in our family bubble, living life one week at a time. Despite all the challenges (why do my parents STILL interrupt Zoom calls despite there being a “do not disturb” sign hanging from my locked door?), despite all the fear, stress and loss this pandemic has caused, it’s provided us with an unexpected window of opportunity to spend time together—for my son to build memories with his grandparents that he’ll treasure for the rest of his life.

Each day when I wake up, I try to think of two things I’m grateful for and commit to two small actions, within my control, that will bring me a little joy. “What will make today great?” Sure enough, little by little, those small moments add up to something quite precious.

Six months ago, who would have thought that:

Who would have thought that TODAY, for the first time in his living memory, Hudson would be celebrating his birthday with both his parents and grandparents—together. The smile on his face says it all!

Lisa Nagorny is the Global Client Review Program Director at Brunswick and based in New York.

Half a World Away

What does “work from home” mean when work is New York, but home is India? Vedika Kumar, from Brunswick’s New York office, shares her pandemic perspective.

Half a World Away

What does “work from home” mean when work is New York, but home is India? Vedika Kumar, from Brunswick’s New York office, shares her pandemic perspective.

Plugging in a Carbon-Free World