Reputation on the world stage

Financial value is at risk as Chinese companies, in the lead for global M&A, struggle with the reputation of “China Inc.”

A recent Brunswick survey of senior M&A advisers, along with our “Perspectives” research among the general public – 43,000 people in 26 markets – paints a bleak picture for Chinese corporates. An overwhelming majority of the M&A advisers polled believe reputation has a significant impact on deal costs, both for an acquiring company as well as a target. This impact is particularly acutely felt by Chinese companies seeking to make acquisitions. Their reputation is seen as having a significant negative impact on their ability to get regulatory approval, shareholder approval and their ability to successfully merge after a deal has closed.

As Chinese companies step forward to play a bigger role on the world stage, how can they build the understanding and trust required to make them welcome acquirers overseas – and, in the process, lower their costs of doing business?

While many commentators in the past two years, especially those in the West, have been hailing the “death of globalization,” you would not know it by looking at recent trends and future projections in cross-border M&A. Recent Brunswick Insight research among M&A advisers, most of whom are senior lawyers and bankers across North America, Europe and Asia, shows high optimism that 2018 will surpass the solid volumes seen in 2017.

Central to this growth story is China. With rhetoric from the US administration focused around a theme of “America First” and nationalist movements in Europe threatening to gain serious traction in key elections, 2017 was the year that China stepped forward as the new champion of globalization. Speaking at Davos, it was Xi Jinping urging the world’s leaders to remain “committed to developing global free trade and investment” and to “say no to protectionism.”

There are clearly gaps between rhetoric and real action on both sides of the world. However, recent moves by the Chinese administration to open its economy and liberalize new sectors of the economy to inbound investment, as well as its Belt and Road initiative and continued support for specific types of outbound investments, reinforce the country’s positioning as a new leader for globalization.

This shift was recognized by a full third of advisers worldwide in our research, who see China’s Belt and Road policy as a leading factor driving global cross-border M&A, ranking ahead of shareholder activism (27 percent) and US tax policy changes (24 percent). Most advisers still expect China and US outbound M&A to lead the way in 2018. 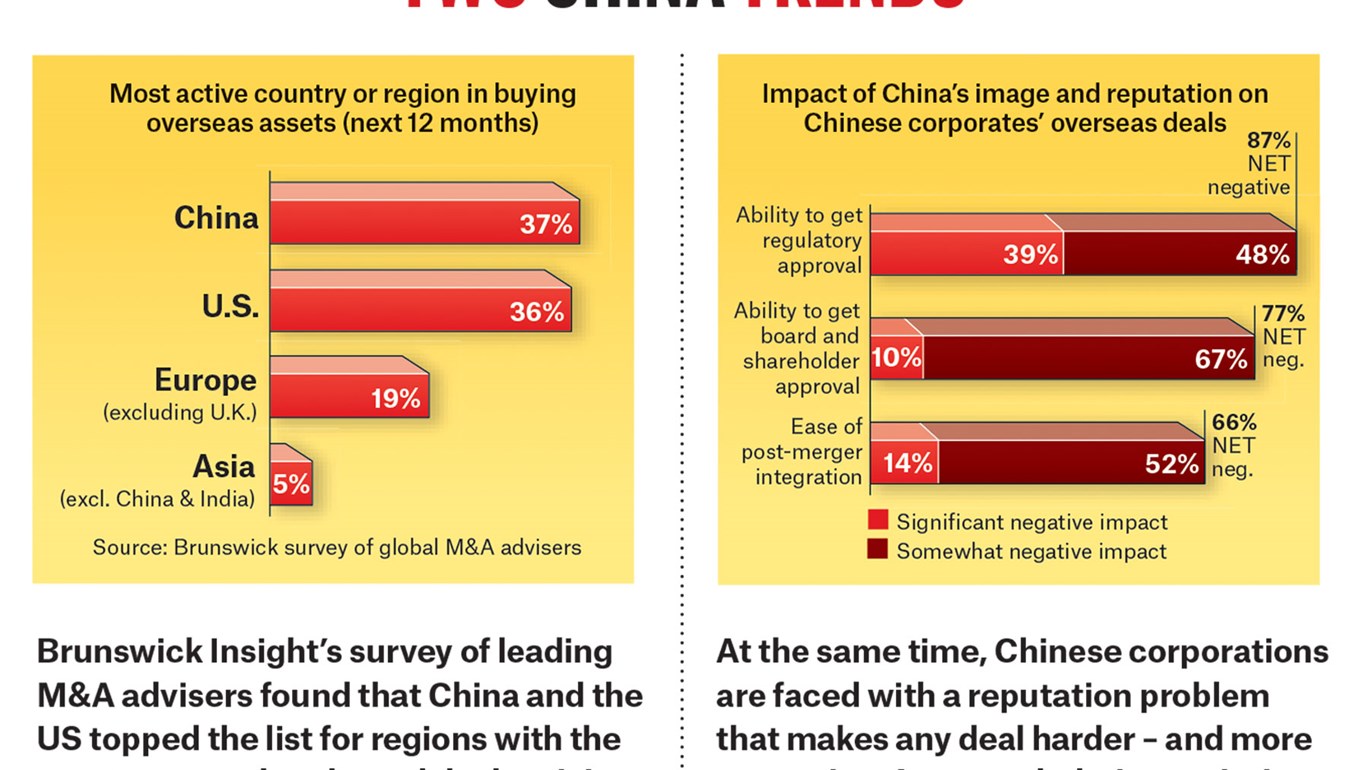 The role of reputation

There remains, however, a high degree of skepticism and concern internationally about China’s changing role in the world.

Perceptions of China Inc. are consistently lower than those of companies from other countries – and often by a significant margin. US and European citizens have a net negative view of Chinese companies. In many countries, this is compounded by opposition generally to foreign acquisition: in the US, Germany, Japan, Australia and France, a majority of the general public are both opposed to foreign acquisitions and have a negative overall view of Chinese companies. The risk of public backlash against Chinese investment in these countries is high.

Public sentiment and reputation challenges have a meaningful impact on the success of Chinese businesses trying to complete a deal, as well as deal costs. China has a long experience of difficult dealings with the Committee on Foreign Investment in the US (CFIUS), and it is facing similar challenges elsewhere. Recent investments in the German technology sector have stoked concerns among the German public – almost certainly a driving force for Germany’s decision to develop its own CFIUS-type body. Several other countries are following suit.

Among the global advisers canvassed in our recent survey, an overwhelming majority (87 percent) feel that negative aspects of China Inc.’s reputation undermine the ability of Chinese companies to get regulatory approval on overseas acquisitions. But the impact is felt to stretch beyond just the decision of the regulator:
77 percent feel the reputation of Chinese companies impacts negatively on their ability to get shareholder approval, while two-thirds (66 percent) believe post-merger integration is made more difficult because of perceptions about Chinese companies.

The implications for Chinese businesses are considerable. The reputation of the country and its companies – its “soft power” deficit – is currently a drag on its considerable global ambitions. Shifting perceptions is a long-term game and companies, Chinese or otherwise, can’t afford to wait until they are about to engage in M&A to build a positive image and profile. Nor can they expect to be able to gloss over concerns around how they are governed and operate.

In the long term, Chinese companies that seek to position themselves as global leaders in key focus areas like sustainability, business in society and corporate governance will be better placed to fulfill their international ambitions and enjoy lower deal costs. Even those that have not invested over the long term in establishing a good reputation can increase their chances of success in M&A by engaging with investors, regulators and other stakeholders in a clear, open and transparent way.

Looking ahead, there is hope. Chinese companies are showing the rest of the world the way forward when it comes to online retail, digital payments and fintech. Chinese innovation in these areas is shifting old stereotypes of China from being a follower to a leader. Just as China’s administration has leaned-in on key global debates around the environment and globalization, so too its companies can seize the opportunity to lead in the areas defining the corporate agenda in the future.

Tim Payne is a Senior Partner and the Head of Brunswick’s Asia offices. David Ashton is a Director and leads Brunswick Insight in Asia, the firm’s research department. Both are based in Hong Kong.

Eric Lebson and Joe Kelly, two veterans from the front lines of cross-border acquisitions, tell Brunswick's Alex Finnegan what to expect from new rules governing the Committee on Foreign Investment in the US.