Brunswick’s James Hallam and Charlie Booth dined with superstar triathletes Alistair and Jonny Brownlee. In a wide-ranging conversation, the brothers discussed being training partners – and each other’s toughest competitor

Crispy chicken. Indonesian curry. Sides of garlic bread and sweet potato fries. We’re moving glasses and plates to accommodate Alistair and Jonny Brownlee’s post-training dinner. “We try to eat a healthy, balanced diet on the whole,” says Alistair. “But you spend your life training, so you’ve got to enjoy food.”

In their native Yorkshire, where they still do much of their 35 hours a week of training, the brothers are local heroes. But if these two Olympic medalists – among the world’s best triathletes – walked past, you probably wouldn’t notice them. Six foot tall, wiry and boyish, they arrive in their matching puffa jackets and tracksuits, stopping briefly to say hello to some people they know at the next table.

“We get recognized much more since Mexico,” the 2016 Cozumel triathlon where Alistair famously had to haul Jonny over the last few meters of the course as his legs gave way, leaving him looking like “a wobbly horse” – a video viewed hundreds of thousands of times on YouTube. “Every few days I cross the street now and get people saying, ‘Make sure you drink lots of water’. I’m quite embarrassed by the whole thing. To get more recognition for losing a race than your Olympic medal, is really weird.”

The brothers are deeply connected to Yorkshire. Many of their training partners have been friends since they were teenagers. Jonny goes to their parents’ house for a roast dinner every Sunday. Their third brother, Ed, a veterinary student, can always be relied on to bring the Olympians down to earth: “He doesn’t care about triathlon at all. He could have come to Rio to watch us, but he didn’t want to.”

In an era of peripatetic athletes and footloose sports franchises, that ordinariness is part of the Brownlees’ appeal – and the counterpoint to their extraordinary achievements. At 29, Alistair has won triathlon gold in the last two Olympics and has twice been world champion. Jonny, younger by two years, has a world title of his own and followed up bronze in London 2012 with silver in Rio 2016.

Their capacity for endurance is remarkable. In the 2012 Olympic race, Alistair finished the 10 kilometer run in 29 minutes 7 seconds. That was only 96 seconds slower than Mo Farah’s time, who won Olympic gold for running the same distance on the track; Brownlee did it having already completed a 1,500 meter swim and 43 kilometer bike ride.

The training required to reach this level is predictably brutal. In addition to gym and physio sessions, they swim 20 to 25 km, cycle 500 to 700 km, and run 120 km or more every week.

While modern sports stars surround themselves with advisers, agents and coaches, the Brownlees have bucked the trend, taking responsibility for their training and race-day performance.

“I want to be stood on the start line knowing I’m completely responsible for what goes right or wrong,” says Jonny. “I’m not saying I don’t have a team – I’ve got the support of four or five people who I rely on.” 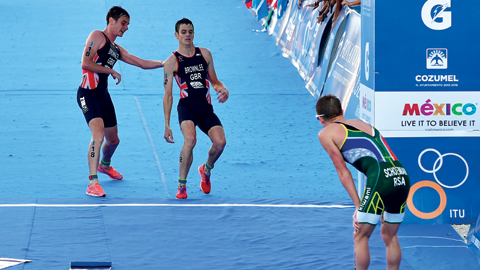 Jonny Brownlee (center), severely dehydrated, staggers across the finish line of a 2016 race in Cozumel, Mexico, with help from his older brother Alistair, who gave up his chance to win the race to support Jonny down the finishing chute. The story, and accompanying video footage, received global media coverage. Jonny says that when he’s out walking in his home town, people still playfully remind him to stay hydrated.

Alistair continues: “You treat coaching as advice, then you sit there and you make the decision.”

That responsibility is evident even in how they approach the night before a big race. Many athletes try to eat exactly the same meal every time – it’s part of a routine, another decision they don’t have to make, perhaps even a psychological crutch. The Brownlees don’t. Their logic: as long as you eat well and don’t get sick, eating a specific thing isn’t essential for performance. If you think you can only run on one particular meal, what happens when you forget to bring it to a race 3,000 miles away?

The same is true of superstitions in general. “When you’ve raced as long as we have and in as many different places, superstitions tend to fall by the wayside, because they never work out very well.”

They’ve stuck to a similar routine since childhood, a schedule originally based on Alistair’s school timetable. While having a familiar routine helps ensure you get out of bed in the morning to train (“If you give yourself an option, you’re in trouble…”) novelty and variation are also vital. “I get the impression that we enjoy our training a lot more than most people,” says Jonny. That means keeping things fresh with new training routes, and using longer loops rather than short, repetitive circuits. “You’d be amazed. Some people say it’s not really training unless it’s boring,” says Alistair. “I’ve had this argument with coaches, who say there has to be a certain type of monotony to training, so that you’re almost training your brain too. They see it as a kind of psychological weakness to try to avoid that sort of monotony. My response is that I think it’s a psychological inadequacy to need that monotony, and not to realize that doing exactly the same physiological training has exactly the same benefits without being boring.”

Both love what they do. But how do they find training, racing and, until recently, living together? “I think we’ve been very lucky that, on the whole, us working as a team has been advantageous,” says Alistair. “You want to train with the best people to push you on, so even if he wasn’t my brother it would be fantastic to be able to train like we do.”

But the brotherly affection belies a steely, ruthless streak, as the world saw in the 2016 Olympic race in Rio de Janeiro. Leading the race halfway through the final run, Jonny turned to Alistair and urged him to “relax.” Alistair did anything but, streaking away to win his second Olympic gold. “We work together as a team until we get onto the run. And then it’s every man for himself.”

For Jonny, training alongside his brother every day has been more of a mixed blessing. He speaks warmly about the comfort of lining up alongside his brother on the pontoon at the start of a race, but also reflects on the mental challenge of competing against the best in the world day-in, day-out: “He’s your older brother and he beats you in training, so maybe you go into a race half beaten.”

While they may be considered a pair by their competitors, sponsors and the media, the differences in their personalities become clear throughout our dinner. Alistair, the older brother, is quietly reflective. His approach is rational and hard-headed. At 18, he gave up a place reading medicine at Cambridge University in favor of triathlons, but when asked about the sacrifices he’s made in his life, he seems almost nonplussed: “It’s a choice you have to make to do what you want to do. I’ve never ever had to pore over a decision about seeing friends or doing a family thing – if it’s been for my sport, I’ve always just chosen sport. If you saw it as a sacrifice, you just wouldn’t do it.”

Jonny is bubbly, quicker to laugh and crack jokes, poking fun at his brother’s love of romantic comedies: “Living alone I can do what I want, like watching Leeds Rhinos or Leeds United on telly, rather than sitting getting bored watching Bridget Jones’ Diary and wondering if I should be doing some stretching.”

Living alone, near their parents and each other, the pair recognize the importance of separating training from life, giving themselves time to switch off after a hard day. Jonny says, “It’s something we’ve got wrong in the past. You’ve obviously got your training, but you’ve also got all your commercial stuff on top and you end up being very, very busy.”

The brothers rely on triggers to mark the end of their training day and the beginning of their evening. Alistair: “As an athlete – and it’s the same as a CEO of a company – it could literally never stop. But usually if I sit down and have a glass of wine, that’s the end of the day.” 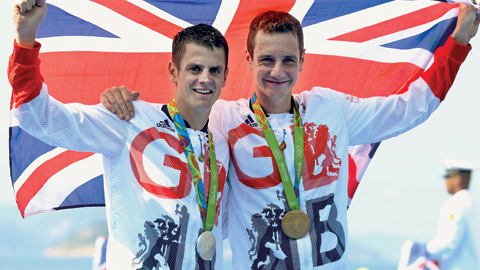 Alistair Brownlee (right) and younger brother Jonny became the first brothers to win Olympic gold and silver medals in the same event since 1960. Here, they stand on the medal podium in Fort Copacabana, Brazil, after taking the top two spots at the Men’s Triathlon race in the 2016 Summer Olympics.

New challenges are coming in 2017. For the first time in years, they won’t be competing alongside one another. While Jonny continues racing at the Olympic distance in World Series events, Alistair will compete in the longer half-Ironman – a 1.2-mile (1.9 km) swim, a 56-mile (90 km) bike ride, and a 13.1-mile (21.1 km) run.

“Ninety-five percent of our training is still together, we just don’t do as many runs together,” says Alistair. But the change marks a psychological fresh start for both brothers. For Jonny, it’s a big opportunity: “I’m excited, definitely. I hope it gives me chance to win something!”

Alistair will step into the unknown in September, when he expects to compete in his first half-Ironman event. Does he think he can win the longer distance at his first attempt, or is this first run about setting a benchmark?

“Nah, he thinks he can win it!” interjects Jonny.

“I think I can win,” Alistair agrees. “I probably wouldn’t be doing it if I didn’t.”

The brothers still have several years of racing ahead, but they have begun to think about life beyond triathlon. Both will seek a second career. For Alistair, that could mean a break from sport. “I’d like to at least try and succeed in something totally different and then come back to sport. I’d never go too far away from it. But I can’t see myself going into coaching.” Jonny talks about growing the Brownlee Foundation, the brothers’ charity that encourages young people across the UK to get into sport. “This year we’re going to have about 5,000 kids doing a triathlon. Hopefully in the future we can get 20 or 30,000. And then I’d also love to have a Leeds United season ticket.”

And with that we call it a night. The brothers, matching puffa jackets back on, stop briefly to say goodnight to the group of girls at the next table before disappearing out into the Leeds night.

It’s past 9 o’clock and they have a hard swim session at 7:45 the next morning.

James Hallam is a Director in Brunswick Insight, specializing in opinion research and stakeholder engagement. Charlie Booth is an Associate with Brunswick. Both are based in London.

Kew Gardens is seeking to help save the world, and perhaps atone for historical wrongs.