What Biden Could Say

A former Chief Speechwriter for President Clinton says Tuesday’s State of the Union is an essential platform for asserting leadership on Ukraine and on matters back home.

President Joseph R. Biden will deliver his first State of the Union address on March 1 amid soaring inflation, awful approval ratings, a persistent pandemic, sputtering legislative ambitions, and, as of last week, a world uncertain about how to deter Russia’s aggression against Ukraine.

Yet the speech need not be a globally televised act of contrition or defensiveness. To the contrary, says Brunswick Senior Partner Don Baer, “There’s an opportunity for President Biden to use this address as a turning point.”

Baer speaks from experience. Following the midterm elections of 1994, when Democrats lost control of both the House and Senate, the leader of that humbled party, President Bill Clinton, faced the daunting task of standing before Congress and the nation to deliver a State of the Union address. His Chief Speechwriter was Baer.

President Bill Clinton's 1995 State of the Union address was “the most important speech of his career,” according to CNN's Wolf Blitzer.

“The electorate had just endorsed the Republican Party in a dramatic fashion, and, if Clinton didn’t use the moment right, we all thought his political fortunes might never rise again,” Baer recalled in a 2007 essay in Politico.

As it turned out, the address marked the beginning of a turnaround culminating the following year in President Clinton’s successful campaign for re-election. “The most important speech of his career,” Wolf Blitzer of CNN declared from the White House lawn.

In Baer’s telling, that speech bore the fingerprints of innumerable advisors, all in the end overshadowed by the President himself. Handed a speech consisting of 5,800 words, President Clinton delivered 9,200, making it the longest State of the Union speech in history. Viewership data showed that the longer President Clinton spoke, the larger his audience grew.

“That night marked the beginning of an important lesson for me about presidential speechmaking in our times,” Baer wrote in Politico. “The American people crave a moment when they can commune with the one national voice they have left: the voice of the president of the United States.”

In an interview this month with the Brunswick Review, Baer notes that President Biden will address a changed world, one in which presidential Twitter accounts may have diminished the stature of the State of the Union address. A world with an “attenuated attention span.”

Baer served as a senior advisor to President Clinton from 1994-97, first as Chief Speechwriter/Director of Speechwriting and Research and then White House Communications and Strategic Planning Director. He was an outside advisor in the 2000 and 2004 Democratic presidential campaigns.

There are "two ways I see that President Biden could use the State of the Union address as a turning point."

Before his White House years, Baer was a media lawyer and journalist; afterward, he became head of Strategy and Development at Discovery Communications and later Worldwide Chair and CEO of strategic communications firm Burson-Marsteller. From 2014 to 2021, Baer was Chair of the Board of PBS, making him the longest serving PBS Board Chair in its 51-year history.

Looking back, Baer recalls that the process of preparing a State of the Union address began in October, with tension mounting as the date drew near. (Usually delivered in January, the speech was scheduled later this year because of COVID.)

Despite the dramatic difference between 2022 and 1995, Baer believes that the State of the Union address still can help save a presidency. 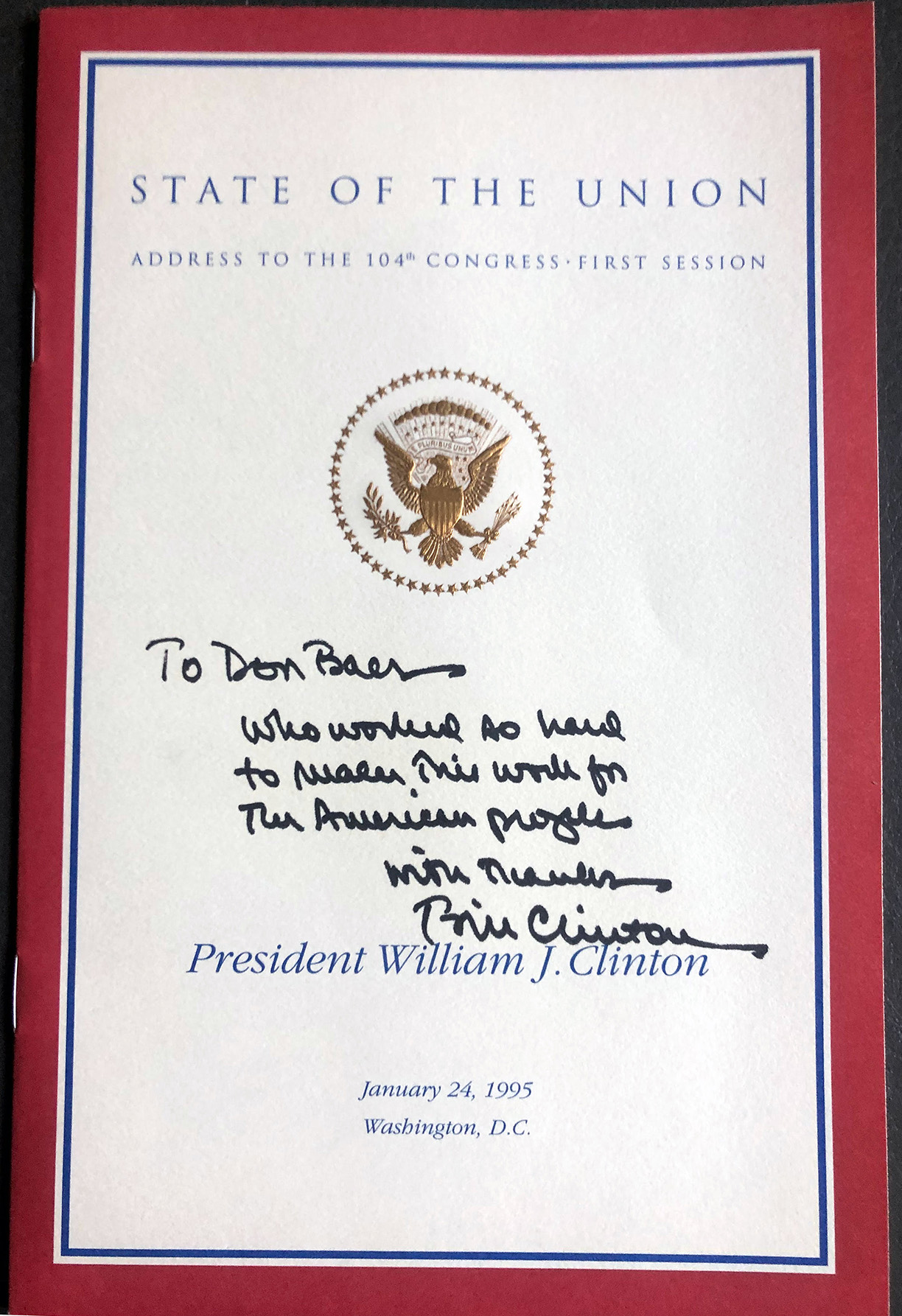 "To Don Baer," President Clinton wrote on this copy of the 1995 State of the Union, "who worked so hard to make this work for the American people."

How can President Biden make the most of this moment?
Given Russia’s outrageous invasion of Ukraine, it is more important than ever for the American president to do everything possible to pull the country together and to assert leadership at home and abroad. In fact, his response to that crisis could reinforce the first of two ways I see that President Biden could use the State of the Union address as a turning point.

That first way is, he could say: “All of this fighting between fellow Americans, all of this division, all of this polarization has to stop. It is defeating us as a country. It is weakening us as a people. It is keeping us from being able to build the kind of future that we want to be able to give to our children. What’s holding us back is not economic growth or opportunity. What’s holding us back is ourselves. Our own divisions. And that’s why we have to find a way around it.”

Of course, that’s been part of his message all along. But I think this is about making the point in a way that’s rhetorically more intense and real. “Look folks,” he might say, “I am 79 years old. I have many, many more yesterdays than I do tomorrows. But one of the things I know, and maybe I feel it more intensely today because I am advanced in my age, is that if we don’t stop this, if we don’t get right and come together as a country, we are heading for disaster as a nation.” And to be very stark and blunt and direct about it.

Then, to say to the members of the opposition party, “I know you don’t agree with many things that we talk about. I know there has been a lot of dispute and unfortunate rhetoric and unfortunate action all around us. I’m asking you to stop this. For the sake of our country and our children and our future. I’m asking you to stop it.” I could even imagine President Biden highlighting some Republicans, Liz Cheney being the most notable.

Then he would turn to the Democrats and say, “We have to learn to compromise for the sake of showing the people of our country we can deliver results to help them. We have to learn to come together around those things we can get done. And not allow the things that perhaps we can’t get done right now today to keep us from those that we can get done. I’m asking everyone in this country, whether you’re inside or outside of this room tonight: Stop a minute, look around and think about how much more we have in common than we have that divides us. How much more unites us than there is that drives us apart.”

That would be a big, big statement and a big moment. All of this takes on more urgency given Russia’s invasion of Ukraine. President Biden needs to show he can rally the nation behind a decisive response under fast-changing circumstances.

What’s the second way?
The second way is in opposition to the first. The second way would be to use this occasion as sort of the kickoff of the midterm elections, where he’s trying to draw lines of division and differentiation between the Democrats and Republicans, to paint what the Democrats have tried to do or are continuing to try to do on every front as being to the advantage of the country and to paint the Republicans as obstructionists. To call out January 6th for what it was: an attempted coup, a violent insurrection. And essentially try to shame them. And then of course to use that as a way to celebrate the things that have been done, to get more credit for them. 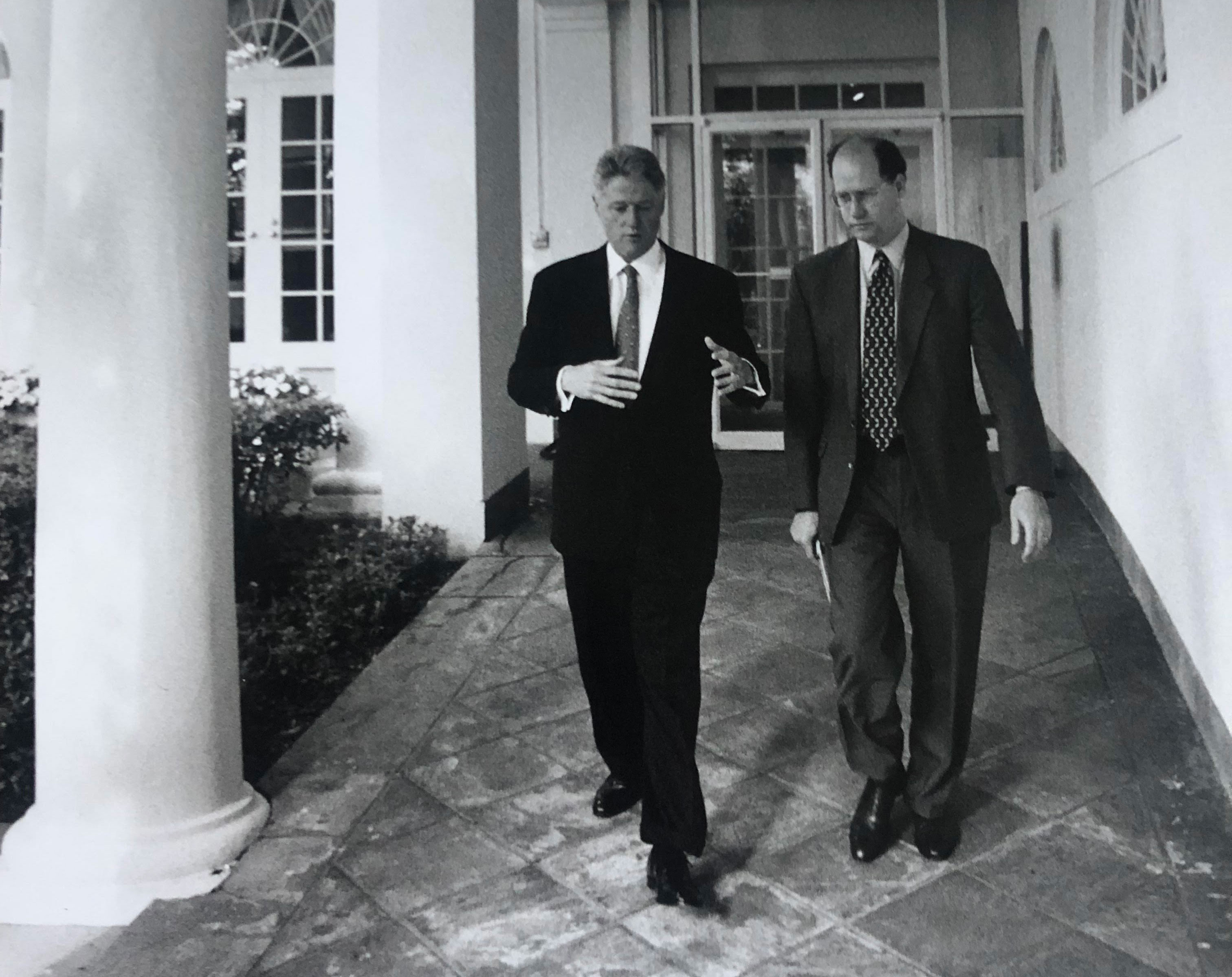 Don Baer with President Clinton at the White House.

Which would you recommend?
I’m what’s called a “new Democrat,” which means I’m a very old Democrat. I really believe in presidents doing everything they can to emphasize what unites us more than what divides us. The president is the one person in the political universe who has the potential to do that.

If I were in the White House, I would like to believe I would be pushing a whole lot more for the first option than the second. There would be plenty of people with a lot of good data, insight and experience who would be saying, “If you do that, any hope the Democrats have of winning in the fall goes down the drain.” My argument would be, “Most of you think the Democrats have no hope of winning in the fall anyway. So why don’t we throw the long ball and let’s see what we can do here?”

Don Baer is a Senior Partner based in Washington, D.C. He works with Brunswick clients on their most critical issues, especially technology, communications, media, consulting and financial services businesses.

With the OECD from 2012 to 2022, Pascal Saint-Amans electrified tax policy discussions and crafted the global minimum corporate tax and other reforms that will have a profound effect on the global economy in coming years. Now a Brunswick Partner, he talks to Carlton Wilkinson.

A Conversation with Pascal Lamy