For Love of Oz

On a per-capita basis, Australia dominates the Summer Olympics. Ranked 55th in population, Australia routinely earns a spot on the medal-count Top 10. In Tokyo this past summer, Australia won more medals than all but five nations.

But until this summer, men’s basketball was an Olympic sore point for Australia. A hoops-crazy nation known for the many National Basketball Association players it has groomed, Australia had never won an Olympic men’s basketball medal. Its women’s team had won five. In Tokyo, the men’s team finally broke that curse, defeating Slovenia in the bronze-medal game. 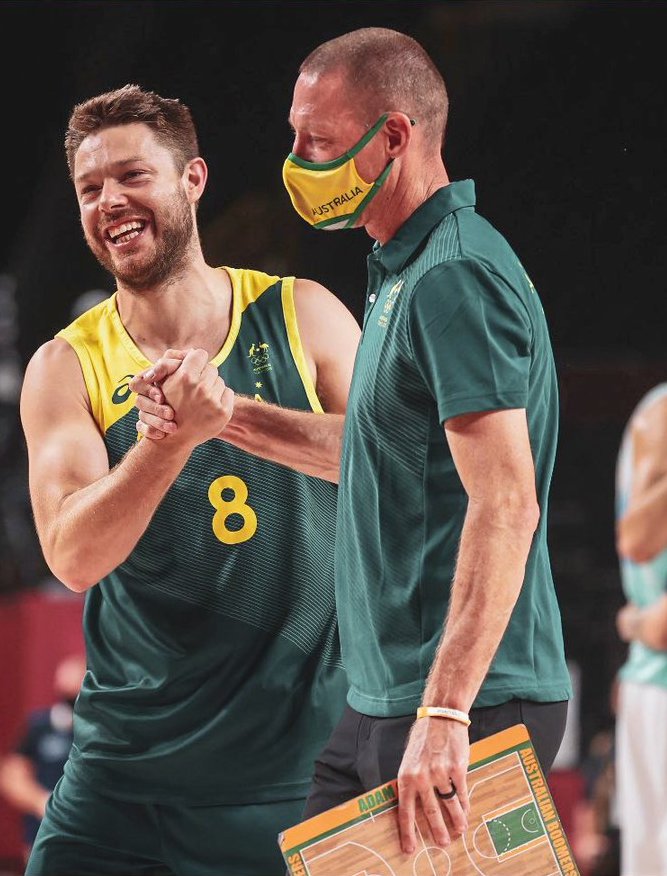 Coach John Rillie, who had played on the 2004 Australian Olympic squad, congratulates one of his players on the 2021 team.

John Rillie experienced firsthand both that record of frustration and this summer’s moment of triumph. He was a player on the 2004 Australian Olympic basketball team that finished ninth in Athens, and a coach of the medal-winning squad at the Tokyo Olympics.

After playing 16 years as a professional player in Australia, Rillie came to the US in 2010 to coach college basketball, ultimately landing a position as Associate Head Coach of men’s basketball at the University of California, Santa Barbara. His heart has always belonged to Australia. “Although my coaching career has brought me to the US, I’m very passionate about my country and representing Australia,“ Rillie said in an interview with Jessica Gang, an Executive in Brunswick Group’s San Francisco office, and a recent graduate of UCSB.

Prior to your bronze win in Tokyo, NBC Sports called Australia the most accomplished basketball nation yet to earn an Olympic men’s medal.
It had been 33 years since we made it to a medal round in the Olympics, and since then the opportunities had eluded us. Being part of that historic moment, playing for your national team and knowing that a medal had never been won, that’s something.

I’m very passionate about my country and representing Australia. To be a part of that again really meant something for me, even before we won the bronze medal.

Thinking back to your appearance as a player for Australia at the 2004 Athens Olympics, did you expect to win a medal back then?
In 1996 and 2000, the Australian team had finished fourth. And in 2004 we had a very new-ish team. We had tasted success with our lead up: a two-year campaign with a new coach and new members of the team. So we were very optimistic. But then our performance on the floor was disappointing. We finished ninth. Now when people ask about the Olympics I can skip over the ninth and talk about the bronze, you know? So it was good to redeem ourselves a little bit. 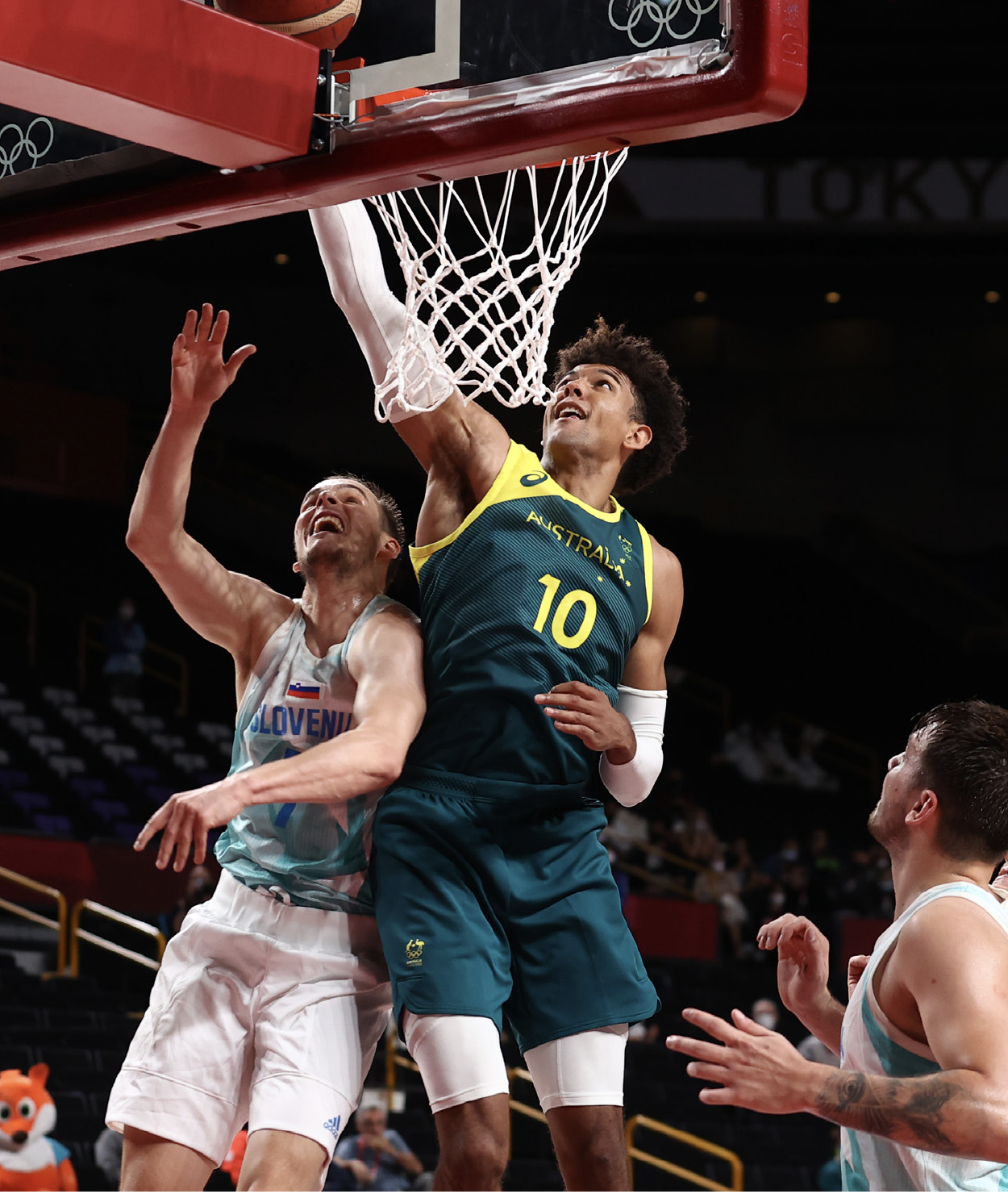 A scene from Australia’s bronze-medal win in 2021.

What factors accounted for the success of this year’s Olympic team?
If you look at our core group, some of those guys have been playing together since they were 15, 16 years old. Mills, Ingles, Baynes, Dellavedova, they’ve been together 15, 16 years, through numerous Olympic campaigns. They’ve been through the highs and the lows. And then among the coaching staff, we had great familiarity. Brian Goorjian is known as the GOAT in Australian basketball as far as coaches go, and had been to the Olympics as a coach.

Matt Nielsen, the assistant coach, played for a number of years on the national team. Adam Caporn, the other assistant, he had been with the previous coach on a number of international campaigns. So the coaching staff themselves had been through some of these battles.

It must have been thrilling to be part of an Australian Olympic Team that, thanks in large part to your incredible swimmers, tied its record for gold medals.
When the US and Australia have a great rivalry in swimming, it really does elevate the sport, and the excitement around it.

What I like about the Olympics is that it becomes more than just about your sport, and you get to be around a lot of other talented athletes. When we got back into the Olympic Village after midnight the night we won the bronze medal, everyone on the Australian Olympic team that was still in the Village met us outside, and we enjoyed the night, you know? In Australia’s outdoor area we had two big screen TVs with deck chairs where people would just congregate. We imported some baristas for two weeks. I’d hate to know how many coffees they made, but they generated a great atmosphere where you’d want to hang out and be around each other.

Australia had a kid go number six in the NBA draft this year, and he didn’t make the final roster for us. That’s a good indication of where we are as a nation in the sport.

In terms of basketball culture, how does Australia differ from the US?
In Australia, obviously individuals are motivated to succeed, but there’s a strong team culture. In the US, I would say individuals are more motivated to see where their own success is going to get them. I’m talking in generics here, but in the US, kids are transferring schools to go somewhere where they think the situation is going to be better for them.

In Australia, the way that sports are built, very few kids feel like they need to leave the area that they grew up in to be successful.

How did you become part of this year’s Australian Olympic basketball team?
To start with, there was a newly appointed coach to this campaign for the Olympics: the head coach that I played for at the 2004 Olympics. So once he got appointed to that position, I was eager to be involved with the national team. Our lead up to Tokyo was based in the US, so the first training camp was in Irvine, California.

I reached out to him and said anything that I could be involved with, I was happy to do—fill water bottles, wipe sweat off the floor, rebound, anything necessary just to be involved. I got invited to be part of it all in practice in Irvine, but initially I was not part of the team scheduled to travel to Tokyo. Then, unfortunately, one of the assistant coaches tore his Achilles at practice. He stepped down and I was fortunate enough to be called up.

On social media, you’ve suggested that this Olympics was more meaningful for you than the one you attended as a player, even apart from winning a medal.
What I learned from my playing experience is that sometimes you think something will just continue to happen over time. I went to 2004, it was disappointing. I thought, there’ll be another opportunity that will come along. As I matured, and got into coaching, I realized I was better off just trying to appreciate the opportunity that’s right in front of me.

I was very fortunate for the opportunity, so I certainly wanted to put my best foot forward. Be grateful and be mindful, and just take the experience for what it was. I think sometimes athletes get so involved in the process that they forget to enjoy what they’re doing as they go along.

John Rillie playing for the Townsville Crocodiles in February 2009.

Isn’t it difficult for players accustomed to associating with one team—say, a professional team—to switch overnight to playing as a full-fledged member of their nation’s team?
There is healthy respect for what representing your country means to individuals, and you’re at the Olympics to do that.

At the bronze medal game, we had a situation where Josh Green, who plays for the Dallas Mavericks, was opposing Luka Doncic, who also plays for the Mavericks. But watching Luka during those two weeks play for Slovenia, you could tell that guy was proud to be representing his country.

Does this medal bode well for the future Australian Olympic basketball?
You could say the monkey’s off our back. But the goal posts have moved. When you break down one barrier there are other hurdles in front of you.

But look, Australia had a kid go number six in the NBA draft this year, and he didn’t make the final roster for us. That’s a good indication of where we are as a nation in the sport.

How does the season ahead look for UCSB’s men’s team?
We had a great team last year. And this year we’ve recruited well. One of our kids is on the fringe of the NBA. It’s like a jigsaw puzzle where we’re trying to make the pieces fit in the best way, and I’m excited about where we are as a team.

Jessica Gang, an Executive in Brunswick’s San Francisco office, is a recent graduate of University of California Santa Barbara, where John Rillie coaches.