Sir Alan Parker poses three questions to Grant, the author of four New York Times bestselling books, the host of a chart-topping podcast called WorkLife and the organizational psychologist who for seven years has ranked as Wharton’s top-rated professor.

I first came across Adam Grant when I picked up Give and Take and realized this was one of those pivotal books that would bring together a great body of thinking and, at the same time, illuminate our lives in real and practical ways. The power of it was such that within two weeks I had received five copies from different Partners around the world. All of their messages carried a similar theme: Adam Grant had captured and brought to life so many of the principles we hold dear within Brunswick.

He used the power of rigorous analysis and great storytelling to ground our long-held beliefs in real experience and analysis.

For those who have sought ways of growing business with a human heart so that performance drives us to be better people who can contribute more, Adam Grant seems to be more relevant than ever. The pandemic has set us huge challenges and will accelerate many of the trends and issues in the world that we have seen emerging over recent years, which is why the World Economic Forum recently turned to Grant to envision how COVID-19 might inspire change in the corporate world.

His thinking has given great grounding to shape thinking and practices that will only become more important if we are to truly build back better.

"I believe that the most meaningful way to succeed is to help other people succeed," Adam Grant said in his viral TED Talk, "Are you a giver or a taker?"

Do you see the pandemic producing a meaningful, long-term shift in how companies think and operate?
Predicting the future is a fool’s errand. That said, it’s hard to imagine the pandemic not influencing the future of work. The most obvious shift is to a world of remote work. We already have good evidence that many people become more productive when they have the flexibility to work remotely—they appreciate the freedom and trust, and respond with greater commitment and dedication. As long as they’re in the office at least three days a week, we haven’t seen performance or satisfaction costs. Before the pandemic, when I shared this evidence with executives, many were resistant to trying it out. Not anymore. Now that we’ve been forced to live this experiment, many leaders have seen firsthand that their people are fully capable of delivering from a distance. The option to work remotely—at least part-time—should be here to stay in many workplaces around the world, especially in the knowledge and service industries. I won’t be surprised if remote work stipends become common benefits: job offers should include a budget for a comfortable home office setup and high-speed internet. Some companies might start differentiating themselves by covering home exercise equipment. 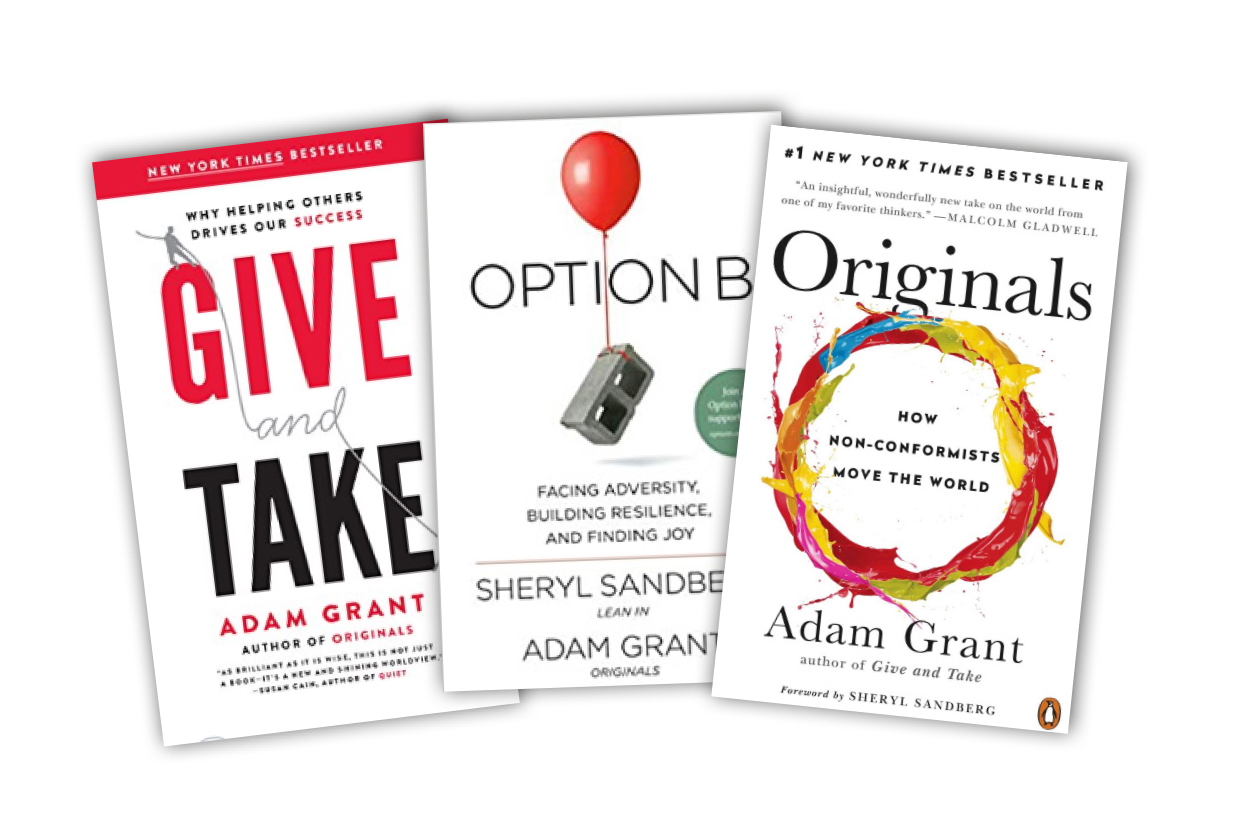 Mr. Grant's three books, all international best-sellers, have been translated into 35 languages.

In Option B, you and Sheryl Sandberg write, “Resilience is the strength and speed of our response to adversity—and we can build it. It isn’t about having a backbone. It’s about strengthening the muscles around our backbone.” What are those muscles for business leaders, and how can they flex them today?
I’d say there are three key muscle groups for leader resilience. The first is creating psychological safety: making it easy for people to share problems and voice concerns without the fear of being punished. We know that psychological safety is critical to both preventing errors and promoting innovation, because it enables people to learn from one another’s mistakes and bring unconventional ideas to the table. The second is taking care of people. It’s hard to take action if you don’t know what your employees are feeling—whether it’s anxiety, isolation, or grief at the loss of normalcy. Now is the time to ask people what their biggest challenges are right now and figure out how your company can help and support them. The third is being proactive, not just reactive. It’s often said that we shouldn’t let a crisis go to waste, and the companies that will bounce back the strongest and fastest from this crisis are the ones that are already envisioning the new future they want to create.

A CEO recently told me it doesn’t feel like he’s brought work home with him. It feels like he’s started sleeping in the office. The number of decisions, the weight of those decisions—those aren’t dwindling for him or any CEO until who knows when. What does the latest research suggest that they can and should do to stay sharp?
We wrapped up season 3 of my WorkLife podcast on May 12 with an episode on remote work. One of my favorite conversations was with Scott Kelly, who’s done more remote work than almost anyone in human history—as an astronaut, he set an American record with a yearlong mission in space. That’s a long time to be in isolation, especially when his life was hanging in the balance of his everyday decisions. Before he left Earth, he did something interesting: he imagined how he wanted his mission to unfold and end. Not just what he wanted to accomplish, but how he wanted to feel throughout the journey. He said having that image in mind helped him stay resilient and mentally alert. Sure enough, this tracks with recent research in psychology: imagining how we want to feel in the future doesn’t just help us see more clearly in the fog. It also makes the present feel more scarce and motivates us to make the most of it. That’s something every CEO can do: Imagine the day this pandemic is finally over. Looking back, how will you wish you had gone through it?

Sir Alan Parker is Chairman of Brunswick, which he founded in 1987. He has established a number of group companies to Brunswick, including MerchantCantos and Brunswick Arts, and was knighted in 2014 for services to business, charitable giving and philanthropy.