A tilted view of leadership

Ernest Shackleton, the famed Antarctic explorer, is often held up as a role model for CEOs. But Peter Stephens asks: should he be?

On August 1, 1914, as World War I was beginning, Ernest Shackleton sailed from London in The Endurance, a small, sturdy ship named for his family motto: “fortitudine vincimus,” translated as “by endurance we conquer.” He intended to tackle the last great challenge in Antarctica: crossing the continent from sea to sea. The British Imperial Trans-Arctic Expedition, as he gloriously named it, aimed to accomplish its work and return to civilization in April 1915, a little later if the weather was bad. They would sail to South Georgia Island, navigate the icy Weddell Sea, land a party of men and sled dogs, cross the South Pole and, 1,800 miles later, reach the Ross Sea before returning to honor and glory in Britain and the rest of the world.

The planning was detailed, as you would expect from a man who had twice tried to reach the South Pole and twice had to turn back. Even so, Shackleton’s expedition failed. The ship was trapped in ice before they reached land. The captain and his 27-man crew had to make their way across treacherous ice to the open sea to have a chance at escape. Some sheltered for months on an exposed strip of coast while Shackleton and five others sailed a 22-foot long boat 800 miles across Drake’s Passage, landed on South Georgia Island (from which they had sailed almost two years earlier) and crossed mountains and glaciers before reaching the safety of Stromness Bay whaling station.

All of the men were rescued by August 30, 1916. The two-year ordeal is a gripping story of strength and endurance against almost impossible odds. 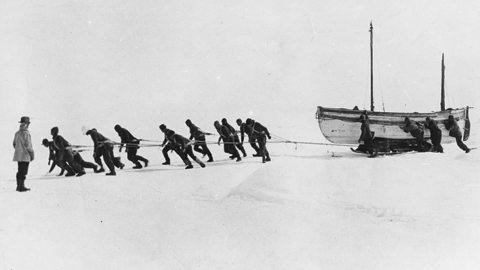 The Endurance crew members pull a lifeboat, the “James Caird,” across snow.  Shackleton and five other crew members used the small open boat to sail 800 miles across brutally rough seas to land on South Georgia Island.

After languishing in the shadow of Robert Scott, a contemporary explorer from the UK, for many years, Shackleton has lately acquired almost cult status as the embodiment of leadership. There are leadership courses based on Shackleton’s handling of the escape. There are books and business school case studies. People travel the world showing photos of his expedition and Antarctica, challenging executives to be more like Shackleton.

But should they, really? What are the lessons to be drawn from this remarkable man and the extraordinary tale of endurance and survival? Is Shackleton a model of leadership for today’s executives, or something else?

The record is instructive. Experienced sailors on South Georgia Island warned him that the ice conditions in the Weddell Sea were worse that year than they could recall. They tried to dissuade him from starting out. He went anyway, failed to reach land and failed to cross the continent as he had set out to do. His ship sank. He spent two years guiding his crew through cold and hunger across ice and water, experiencing countless brushes with death and months of tedium trapped on ice or on barren, windswept land. In the end, he was back where he started and the last great Antarctic challenge remained unmet.

Elsewhere in his life, the record does not suggest outstanding leadership. His other business ventures failed, and when he died at age 47 on his way back to Antarctica, his family was heavily in debt.

If this is great leadership, one could argue, we could probably do with a lot less of it. A modern CEO who turned in results like that would be dismissed by the board and vilified by the shareholders. Staff would look elsewhere for job security. Clients would entertain proposals from someone less risky. Regulators would ask questions.

It may have been Shackleton’s capacity to endure that made him a good leader, not the other way round. In many ways, he was a flawed leader, only at his best when things were worst. Alfred Lansing, the author of the classic account of Shackleton’s expedition, Endurance, spoke with many crew members and wrote of Shackleton’s “monstrous ego and implacable drive,” of a man who was “out of place, even inept, in a great many everyday situations.”

But Shackleton was exceptional at what today we call crisis management. When calmness and strength were required, quick decision-making and a disciplined pursuit of clear goals, he came through. In any company, political party or sports team, these are priceless attributes. But not always. A crew member from an earlier voyage said: “For scientific leadership give me Scott; for swift and efficient travel, Amundsen; but when you are in a hopeless situation, when there seems to be no way out, get down on your knees and pray for Shackleton.” 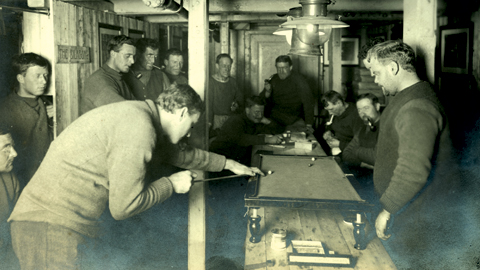 For almost 11 months while The Endurance was trapped in ice, the crew continued to live – and even play pool on a miniature table – aboard the vessel, as they waited and hoped for the ice to melt and their journey to continue. The men nicknamed this revelrous room “the Ritz.”

Character. Marcus Aurelius suggested that we should stop discussing what a good man is, and just be one. A good person puts others first, principles first, a sense of honor first. It is not all about stock options and bonus and title. A person of good character is worthy of, and gives, respect, which is the foundation of all enduring relationships. Shackleton in a crisis did what he believed was the right thing, not the easy or self-serving thing. One senses that his private actions would have stood up to public scrutiny. That builds a huge amount of trust – handy in a crisis.

Clarity. Once their ship was trapped, the men of The Endurance had a clear, desperate goal – survival – and Shackleton made them believe it was possible, however unlikely that seemed. His orders were clear and simple. The men’s roles were clear. The purpose of each action was clear. There was no confusion about the goal or the steps to reach it.

Commitment. Shackleton acted with certainty and took responsibility, and he expected the men to do the same. He did not negotiate or try to please. Everything was done solely in order to deliver their escape. He ordered the sled dogs killed to conserve food supplies. He turned back when he had to and pressed on when he had to. He ordered the men to leave precious personal items behind to save weight when they started their escape, but allowed a banjo to be carried because the singing would raise morale.

With strength of character, clear goals and commitment, Shackleton achieved something almost beyond belief. Antarctica and that level of suffering will never be a part of most lives; the opportunity to achieve something special will be.

Peter Stephens retired in 2017 after serving as Head of Corporate Communications in Asia Pacific for Barclays. His previous roles included being Director of Communications for the World Bank, and spending a number of years as a foreign correspondent.

Nigel Topping is tasked with encouraging businesses and investors to be more ambitious in combating climate change. He speaks with Brunswick climate expert Phil Drew.

An hour of an executive’s time can lead to an entire month of content. Here’s how.

In an interview, Brunswick’s CEO assesses the challenges facing leadership in a time of crisis.