The Value of "Bad" | Brunswick
Perspectives

The Value of "Bad"

Under work-from-home rules, Brunswick colleagues have taken turns sharing a Thought of the Day email to buoy co-workers’ spirits and to maintain our sense of community. Brunswick Review selects a few of these to share with our readers. On April 14, Austin Rathe sent this note.

These are, objectively, difficult times. it’s tempting to refer to the situation we’re in as “bad”—and that makes sense, of course. I’m certainly not going to argue that this isn’t bad. But I am going to tell you a story that might change what you think “bad” is.

After learning to walk again, Austin made the news by becoming a marathoner.

A lot of years ago now I was crossing a busy street near my parents’ home and stepped out in front of a car that had no chance of stopping in time. The result of this impromptu experiment into the shock-absorbing capabilities of the human body was about what you’d imagine—I was a total mess. I’ll spare you the specific details, but I will say that I spent the bulk of the next three months in a wheelchair and the balance of the next six figuring out how to walk again. (Fun fact: I really did have to “learn” to walk again, but you really don’t ever forget how to ride a bike).

I got better, as you do, and in the years that followed both my career and my relationships all developed to be much better than they had in the years before the accident. It took a while, but after a few years I came to realize that most of what was good in my life was, to some extent, a result of having that accident. I had a sense of mortality that made me be nicer to people, and I was conscious my life was limited so I both worked harder and was significantly more picky about how I spent and with whom I shared my time. I began to believe, and to tell people, that nearly getting killed by a car was the best thing that had ever happened to me (emphasis on the “nearly”). 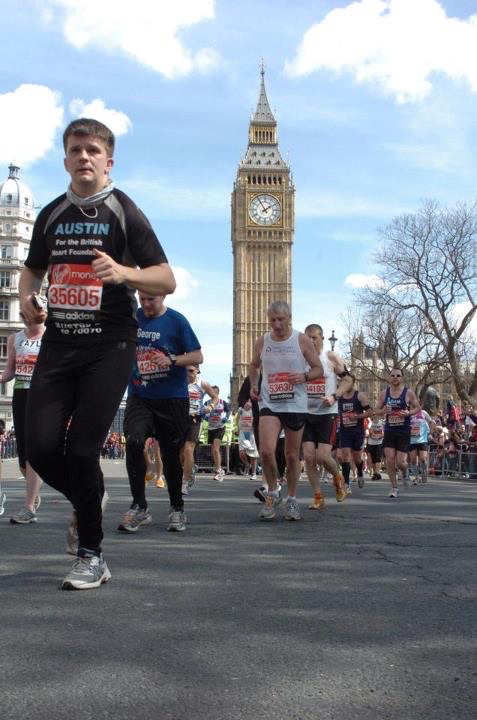 Austin running in the 2004 London marathon.

Once, when I was telling a friend this story (I talk about it a lot, I’m afraid, as some of you know), he said, “You mean like that Chinese proverb about the boy and the horse?”

Seeing me stare at him blankly, he told me the story, which goes a little something like this…

I’ve since learned that the original Chinese version of this is slightly different, but the moral is the same. The message is simple and, for me, very relevant to where we are now: Good things can come from bad things, and in fact they very often do.

The situation we’re in now is certainly difficult and parts of it are heartbreakingly bad, but from this, in the end, will come new experiences, relationships and inspirations for all of us that we wouldn’t have had otherwise, and that’s going to be something we value in years to come.

Austin Rathe is a Partner in Brunswick’s Digital practice, advising clients across a range of sectors to develop effective social and digital communications strategies. He is based in New York.