The man behind the hashtag, Chris Messina, talks with the Brunswick Review

Before #metoo or #blacklivesmatter, there was #barcamp. On August 23, 2007, less than two months after the first iPhone was released, Chris Messina, a designer and developer working in Silicon Valley, tweeted “how do you feel about using # (pound) for groups. As in #barcamp [msg]?”

Alongside the tweet (BarCamp referred to a technology conference Mr. Messina helped organize, one that has since been held in 350 cities around the world), he posted a blog about how the technology could work and created mockup designs of how it might look. The post ended humbly, acknowledging the idea wasn’t perfect, but that “the beginning steps look somewhat promising and workable.” Two days later, a fellow technologist offered a catchier name for Messina’s idea: hashtag.

In July 2009, roughly two years after he’d suggested the idea, Twitter took steps to allow the symbol to function as it does now, and as it does on every major social media platform: linking the symbol to the word and making it searchable.

Mr. Messina went on to work for some of Silicon Valley’s biggest names – Google, then Uber – and recently co-founded Molly, a technology service that “cleverly answers questions about you based on what you tell her and the social media you share with her.” His creation, the hashtag, has provided the prefix and rallying cry for social movements across the world – #IceBucketChallenge, #MeToo, #BlackLivesMatter, #BringBackOurGirls – and has transformed the way we write, search for, and discover conversations online.

In a recent conversation, Mr. Messina told Brunswick how the hashtag was more of a “slow hunch” than a eureka moment, and inspired by practicality as much as politics. He also offered an alternative view for curmudgeons who grimace at hashtag finding its way into the Oxford English Dictionary and our daily conversations.

Where did the first hashtag come from?

In 2007, about a year after Twitter had started, the first South by Southwest Festival – the tech conference in Austin – was held and people were tweeting about it. People who didn’t go to SXSW were annoyed that their Twitter feeds were full of all of this garbage that they didn’t care about.

I knew that a lot of the behavior and activity on the web at the time was about group formation, so it seemed one solution would be to force everyone who wanted to talk about SXSW into a group.

The problem was no one was going to do that. You try to corral humans and they’ll resist on principle. We needed something that was easy, that was opt-in, that people would have some sort of economic incentive to use – and of course, that incentive typically is vanity. You want to be seen, right?

There were two other important features at the time that don’t really exist in the same form today. One was called track, which allowed you to create a kind of Google alert for a word on Twitter. Any time that word was mentioned, you’d received a notification. The other was Internet Relay Chat, or IRC, sort of like chat rooms, and each chat room or channel was denoted by a pound symbol as a prefix, and then the name of the channel.

So the behaviors were relatively straightforward; I brought them together. It was pretty easy to explain how to use it. And more importantly, it was sort of an open-source behavior: When you saw someone doing it, you could emulate their behavior, or you’d figure it out pretty easily. And it was important that the hashtag would work anywhere you could write text, and people couldn’t remove your hashtags.

You say that its “open-source behavior” was important. Why?

It provides context to what we were trying to do at the time – and when I say “we,” I mean there was a community of technologists, people building social software, in San Francisco in particular. We had a bunch of libertarian ideas about how the internet should be built to enable speech, coordination, communication, and expression. I think people forget that some of the tools and technology which allow that today simply weren’t there when we started. A lot of what social media was, the role it could play, whether it would even be useful – that was being debated at the time. We didn’t think Twitter was going to succeed; people didn’t know what it was for. They just thought it was stupid navel gazing.

Did you save any of the most pointed comments or critiques to your idea?

Oh, yeah. People really hated it. They said, “Chris Messina uses way too much jargon in his tweets,” and, “What is this crap?” There were traditionalists who just thought it was an abuse of language.

All that was there. And I thought: that’s cool. What is it that you feel isn’t effective about this idea? What’s your alternative? How else can we solve this problem in a way that’s elegant, and accessible, and doesn’t require people to think too hard? 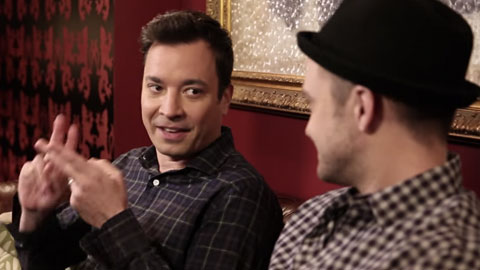 The comedian and late-night talk show host Jimmy Fallon (left) parodied the conversational use of "hashtag" in a skit with the musician Justin Timberlake. Since its release in 2013, the video has had more than 32 million views on YouTube.

In less than two minutes, the pair say "hashtag" nearly 50 times, making the pound sign with their fingers every time they use the word.

Mr Messina jokes about the number of times friends and colleagues had sent him the skit.

People probably assume the creator of the hashtag is worth billions of dollars.

But aside from the recognition, how have you benefited from creating the hashtag?

A lot of people have the same perception: “Oh my God, you created this thing, you must be worth so much money.” And the truth is I can sort-of-mostly pay my rent.

I’ve been asked, “Why didn’t you patent it?” and it’s because I saw it as a way of shaping thoughts, and it’s important that thought remains free. That idea would be imperiled or hindered had I tried to assert some type of ownership over it.

Creating products and technologies that invite participation, that actually support participation – that intention has come true in a way that clearly hasn’t happened in other parts of social media. Not that I’d call all uses of the hashtag positive, but many of them are.

Maybe I could clamp it down and still make some money and it’d be fine. But that wasn’t my goal. I wanted to build an open-source concept that no one could really own, and that once the behavior was learned and documented, anybody would be able to use it without requiring permission from me.

When I think about dividends that I get from this, it’s more about the cultural dividends, propagating a more open and inclusive culture, even if it’s challenging at times, like when I think, “I wish I was as cool as the people using these hashtags,” or, “Oh my God, the Alt-Right is using hashtags.”

Has the hashtag been a mixed blessing for you? Is there a fatigue that comes with being known as the creator of the hashtag when your career has been much more than that?

No, because it’s a jumping off point. And I think it’s at once relatable yet inscrutable – magical even.

One of my best experiences in this was talking to a group of teenagers – I think a friend’s kids or younger siblings – and my friend casually introduces me as the inventor of the hashtag. And they’re like, “Yeah whatever, old man.” And I told them to Google “hashtag inventor.”And when my face came up, their faces dropped.

It’s sort of like meeting the person that invented the steering wheel, you know what I mean? This is such a perfunctory thing that’s part of my everyday life and there was a person behind it?

There was a world where there were no hashtags and then suddenly –you’d think it was suddenly, but it was really 10 years – hashtags are everywhere. And I lived through that. I saw that process. I saw my friends build companies like Wordpress and Instagram, and I happened to contribute this interesting, small little hack on language.

People now say “hashtag.” What’s your response to those who grimace when they hear it, or characterize it as the erosion of language?

It’s funny because I’ve been part of conversations where people actually don’t know my connection to it and they will just use spoken hashtags ironically, and I obviously giggle a little bit inside.

On the one hand, it’s incredible. I didn’t come out to Silicon Valley with any sense that I might contribute something that would become part of the vernacular. You might dream, “well, wouldn’t it be amazing if…?” and then you go back to your day job.

But for an older generation observing what seems like the deterioration of language – I would look at that differently. I think we’re seeing shifts in how we communicate that are really interesting and meaningful. It’s an expansion of language.

You have a thought in your mind and you want to put that thought into someone else’s brain – how do you do that? Language. And you can tweak it to express something new. That’s what the hashtag does, it tells you, “This word in this context is important. It describes what I’m talking about.”

For a long time, we used computers to express ourselves in very direct, rule-based ways – rules that came from centuries of printed text. Today, young people are learning to communicate within the basic constructs provided by a QWERTY keyboard on their phones, and yet are able to speak in a language, and manipulate a language that probably wouldn’t make sense to you or me – they’re removing vowels, adding multiple periods, things like that.

We’re starting to see how fast language can be manipulated to become more expressive. And this evolution is happening before our eyes, an evolution we couldn’t see before because it was so slow. We’re seeing the mutability of language, and how it allows us to adapt in ways that we probably don’t even fully understand or appreciate yet.

Chris Messina, the creator of the hashtag, is co-founder of Molly, a service that allows people to ask questions, and that automatically responds using information from your social media profiles. He formerly worked for Uber and Google, and co-founded BarCamp, a technology and web event that has been held in more than 350 cities.

Edward Stephens is Deputy Editor of the Brunswick Review, and based in New York.